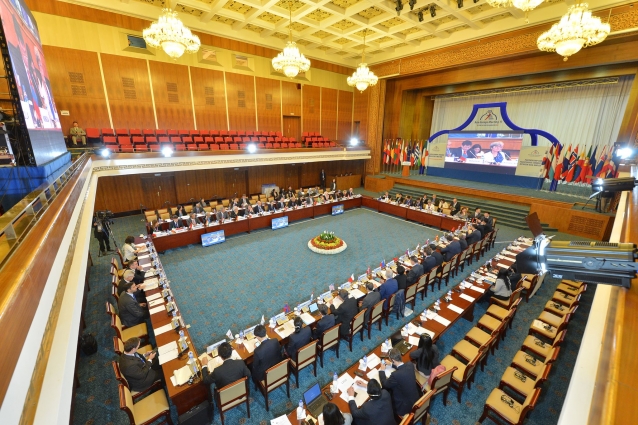 The 12th Asia-Europe Meeting (ASEM) Finance Ministers' Meeting (FinMM12) is taking place on June 9 and 10 under the theme Partnership for Prosperous Connectivity Between Asia and Europe. State Secretary of the Ministry of Finance Kh.Gantsogt gave opening remarks at the meeting. Minister of Finance B.Bolor noted, "The FinMM12 is taking place at a time when economic cooperation is considered to be of great significance in Mongolia. When we visit a country, we make agreements with that country. It's a great achievement that Mongolia is holding meetings with over 43 countries and two international organizations within only two days." The Finance Ministers' Meeting is being attended by over 210 delegates from 43 countries and 12 country representatives from two international bank and financial institutions. Finance Ministers from Japan, Estonia, and Malta, and the Deputy Finance Ministers of Russia, South Korea, Indonesia, Thailand, Slovakia, and Laos are participating in the meeting. On June 9, the Finance Deputies discussed the ASEM FinMM12 agenda and drafted the ASEM Communique. Today's meeting consists of three plenary sessions: Macroeconomic Development and Prospects in Asia and Europe; Ensuring Financial Stability at Regional and Global Level; and Connectivity Between Asia and Europe. The FinMM12 delegates are scheduled to visit Tsonjin Boldog Resort, the Gobi Cashmere factory, and Choijin Lama Temple Museum during their stay in Mongolia.
SHARE
Share on Facebook
Tweet on Twitter
Previous article Smartphone addiction harms children’s mental health
Next article The EU-funded ‘Sustainable Plastic Recycling in Mongolia’ project is helping to improve waste management in Mongolia