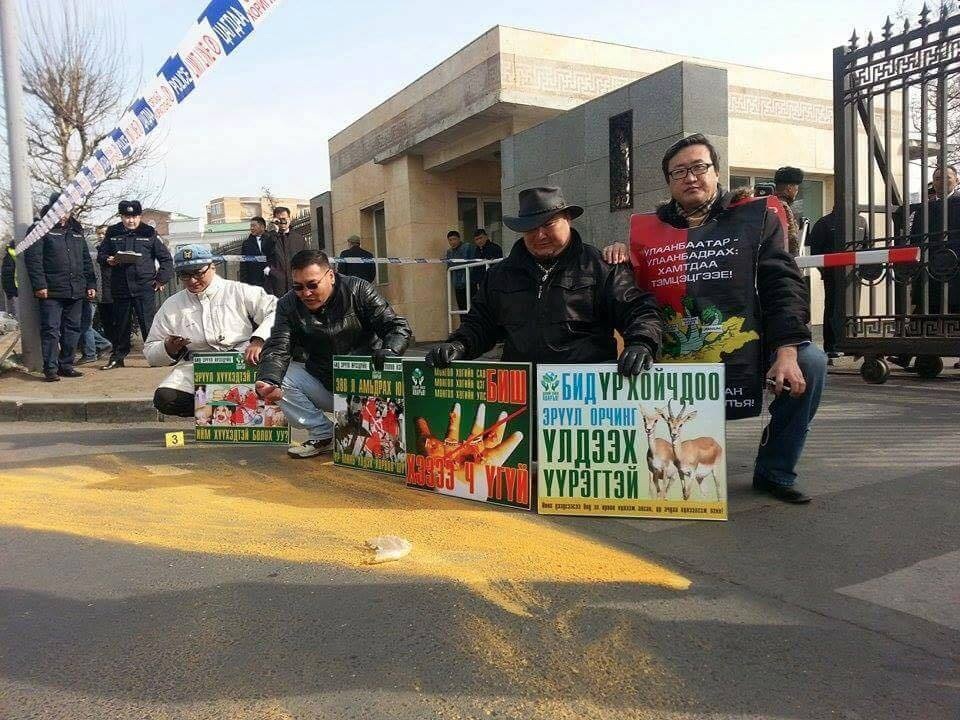 Approximately 30 representatives from activist groups, including the Bosoo Khukh Mongol Movement and Evlen Manduulakh Khuch Movement, demonstrated outside the Parliament House on March 29 as Parliament was scheduled to discuss the signing of international treaties concerning radioactive waste. The demonstrators poured yellow powder on the ground during their protest against the government's policy on radioactive materials. Police officers suspected the powder could be uranium, and removed the demonstrators. The National Emergency Management Agency is currently investigating the powder. On March 29, Parliament had planned to discuss a bill submitted by Minister of Mongolia S.Bayartsogt on joining the 1994 Nuclear Safety Convention and the 1997 Joint Convention on the Safety of Spent Fuel Management and on the Safety of Radioactive Waste Management, as well as ratifying the 2005 protocol on amendments to the 1980 Convention on the Physical Protection of Nuclear Material. The head of the Evlen Manduulakh Khuch Movement, B.Tumenjargal, says that based on the domestic and international legal environment and current issues in management policies regarding radioactive material, Mongolia should not join the conventions. A statement of protest was printed for the 76 Members of Parliament and the President of Mongolia, and presented to them on the morning of March 29. “Our main concern is that Mongolia is not ready to join the convention yet and the legal environment is not sufficient, so we have decided to demonstrate,” said B.Tumenjargal. The demonstrators believe that the bill includes articles capable of posing great danger to national security. “The 1997 Vienna Convention on Civil Liability for Nuclear Damage states that nuclear waste must be disposed of in its country of origin. By signing on to the convention, Mongolia would be agreeing to being responsible for nuclear waste resulting from the export of nuclear material. “In 2015, the Government of Mongolia issued three uranium mining licenses to a French company called Areva, and the company is working to export uranium starting from 2017. We don’t support this law, as Mongolia will face the responsibility of taking back the nuclear waste,” one of the demonstrators said. A Parliament spokesperson reported, “The Joint Convention on the Safety of Spent Fuel Management and on the Safety of Radioactive Waste Management was approved by International Atomic Energy Agency member states on September 29, 1997. It entered into force on June 18, 2001, and 69 states have ratified it.” According to the spokesperson, Mongolian lawmakers  will accept the right to prohibit the import of radioactive substances and spent fuel from other countries stated in Article 12 in the convention’s introduction if the government agrees to sign the treaty.   Three protesters were arrested under an order from the Sukhbaatar District Court. The following is a short interview with the head of the Evlen Manduulakh Khuch Movement’s Board, P.Shinjeeravdan, about the demonstration and the people arrested.   What’s the reason for three people being arrested?   Ts.Buyanduuren from the Bosoo Khukh Mongol Movement; Ganbaatar, a coordinator at the National Center against Disaster; and journalist Ch.Munkhbayar were arrested under an order from the Sukhbaatar District Court. The reason is not clear yet.   Didn’t you organize a demonstration without a permit?   Technically, today’s event is not a demonstration. In addition, the public only heard about Parliament organizing their irregular meeting yesterday (March 28). Even if we were to organize an official demonstration, we didn’t have time to get permission. There’s no way to get permission in this case.   How many organizations and people participated in this gathering?   Evlen Manduulakh Khuch, Urangui Mongol (Uranium-Free Mongolia) Movement, and over 20 organizations gathered to represent the public. I think more than 20 to 30 people participated in this event. We expressed our views on the Parliament meeting to discuss dumping nuclear waste in Mongolia and joining international conventions. We demonstrated at the west entrance of the Parliament House. Mongolia gave a two-year mining license to Areva. In the end, there’s a high probability that the nuclear waste will be sent back to Mongolia. We refuse this condition that might be brought about by the corrupted 76 who stand against national security. We demand that they act better. That’s why we poured and threw yellow powder at the west intrance of the Parliament House. I’m not sure if they tried to give a politicized image about this gathering, but police officers paid extra attention to this and placed the Parliament House under high security. It has been five years since the Fukushima Nuclear Power Plant had a meltdown. It released hundreds of thousands of tons of nuclear waste. There’s radioactive water in the ocean. If this waste was really not harmful, why isn’t Japan burying it themselves? Why does Japan choose Mongolia? They’re trying to use the fact that Mongolia has a small population and a vast land, and that the public is sleepy and not well-informed about the negative impacts of nuclear waste. You have to understand that they chose Mongolia because it’s a soft country.   Why did you pour the yellow powder?   We threw it to express that we’re against this issue. We used yellow ochre powder used in construction to represent nuclear waste. Some of our members licked and even ate it, if you have been watching. But they’ve got to stop stirring this up. Anyhow, I don’t know if the members didn’t want to attend the session or if there was another issue, but the meeting was postponed. It is beneficial to the public.
SHARE
Share on Facebook
Tweet on Twitter
Previous article Smartphone addiction harms children’s mental health
Next article The EU-funded ‘Sustainable Plastic Recycling in Mongolia’ project is helping to improve waste management in Mongolia