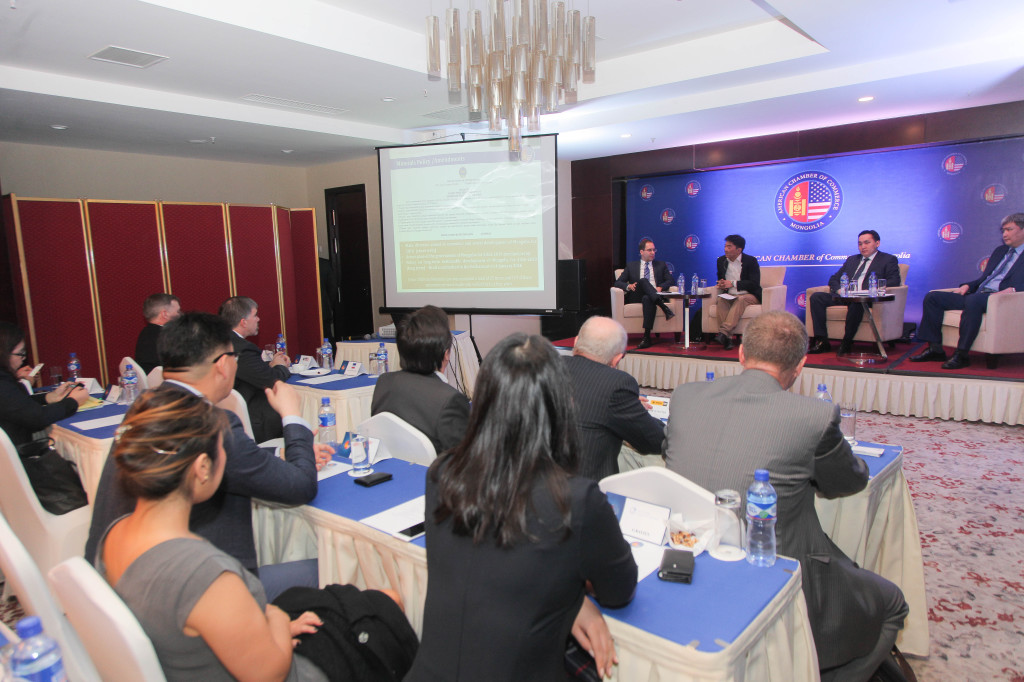 The American Chamber of Commerce (AmCham) in Mongolia held a panel discussion and a Q&A session about current challenges in the mining industry and future expectations from it with CEO of Energy Resources LLC G.Battsengel, Economist and Executive Director of Mongolia Oil Shale Association Ch.Khashchuluun, and Chief Economist of Erdenes Mongol LLC and board member of Oyu Tolgoi LLC Ch.Otgochuluu during their Monthly Meeting held on April 20. The meeting was attended by approximately 60 participants, including AmCham members and representatives from the private sector. During the discussion, economist Ch.Khashchuluun said that Mongolia is finally enabling independent operations in the mining sector and looking to diversify the economy. He added that government intervention should be minimized to be open for foreign investment. “What the government should do now is to create possibilities for more investment by preparing more in-detailed geographical maps, promoting exploration in both private and government organizations, and generally doing nothing else,” said G.Khaschuluun. He continued and discussed existing projects, new infrastructure in the Gobi region, the construction of power plants, and the new independent fuel suppliers to Mongolia. Board Member of Oyu Tolgoi LLC Ch.Otgochuluu spoke about the 35 million USD diversification project that the company is implementing with Asian Development Bank. "Erdenes Mongol is currently going thorough governance reform, which will increase our value by three or four times if we manage the transition well," he said, adding that the company is learning a lot about state ownership and corporate governance by cooperating with International Finance Corporation and the European Bank for Reconstruction and Development. He emphasized the significance of state owned enterprises which do not compete with the private sector, and added that the Erdenes Mongol board will remain the same regardless of the outcomes of the 2016 election. CEO of Energy Resources LLC G.Battsengel said, "We always focused on our investors and shareholders rather than marketing our company. What is happening at Mongolian Mining Corporation at the moment is just a reflection of what is happening in Mongolia and what is happening in the coal sector globally." He focused his discussion on the advantages that Mongolia has in the regional market. During the Q&A session, G.Battsengel said that he predicts it will be three to four years before the completion of railways which will enable more cost effective transit of mining exports.
SHARE
Share on Facebook
Tweet on Twitter
Previous article Pandemic control and immunization coverage to determine speed of economic recovery
Next article World Bank: Stimulus program will drive economic recovery