The average lifespan of most tugrug banknotes has become slightly over two years, according to Mongol Bank.

The national currency of Mongolia, the tugrug, symbolizes the country’s independence and sovereignty. It requires hefty sum to print new banknotes, as well as transport and eliminate them. On average, a tugrug bill used to be used for 3.5 to 4 years before, but now, they are used for less than three years on average due to improper use and storage, reported D.Ariun, a spokesperson for Mongol Bank.

“The average lifespan of currencies depends on their material and weather conditions. However, it also depends on the public’s usage, awareness and habits related to money,” she said.

A recent study showed that the average lifespan of banknotes of developing country is two to three years, while it’s up to 10 years in developed countries. Most developed countries tend to develop notes with polymer or plastic, which are more durable and resistant to damage.

The frequency of order for new notes depend of the denomination. For example, 1,000 MNT notes are used in circulation for the shortest period of time among other tugrug notes, specifically 2.6 years. This is particularly because it is most commonly used in cash transactions. On the other hand, high denomination banknotes such as 10,000 MNT and 20,000 MNT are used the longest for three to five years.

The central bank says that 75 percent of banknotes are eliminated due to contamination, 15 percent due to folds, and 10 percent are removed because they are accidentally torn or damaged.

“Banknotes are damaged and made unusable in various reasons. This shows that people are not using them properly. With better usage, the lifespan of notes can be extended and it would prevent unnecessary expenses,” D.Ariun said.

It is common to see small denomination notes such as 10 MNT, 20 MNT, 50 MNT and 100 MNT placed on ovoo, or religious heaps made of mostly stones in dedication to deities. Experts said that this is because people rarely use small bills.

Khamba Lama of Gandantegchenling Monastery D.Choijamts noted, “Money should have an owner. Only that way can it be used for goodwill and charity. Burying and placing money on things have no merit. I advise you not to offer money to mountains and ovoos.”

To promote the proper use of money, Mongol Bank is running a campaign with commercial banks and nonbanking institutions. It is teaching about the value of money and good cash related habits through various measures such as infographics, advertising boards, writing contests and more. 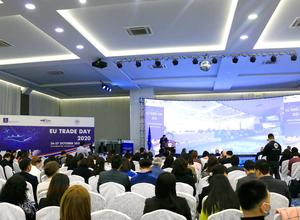