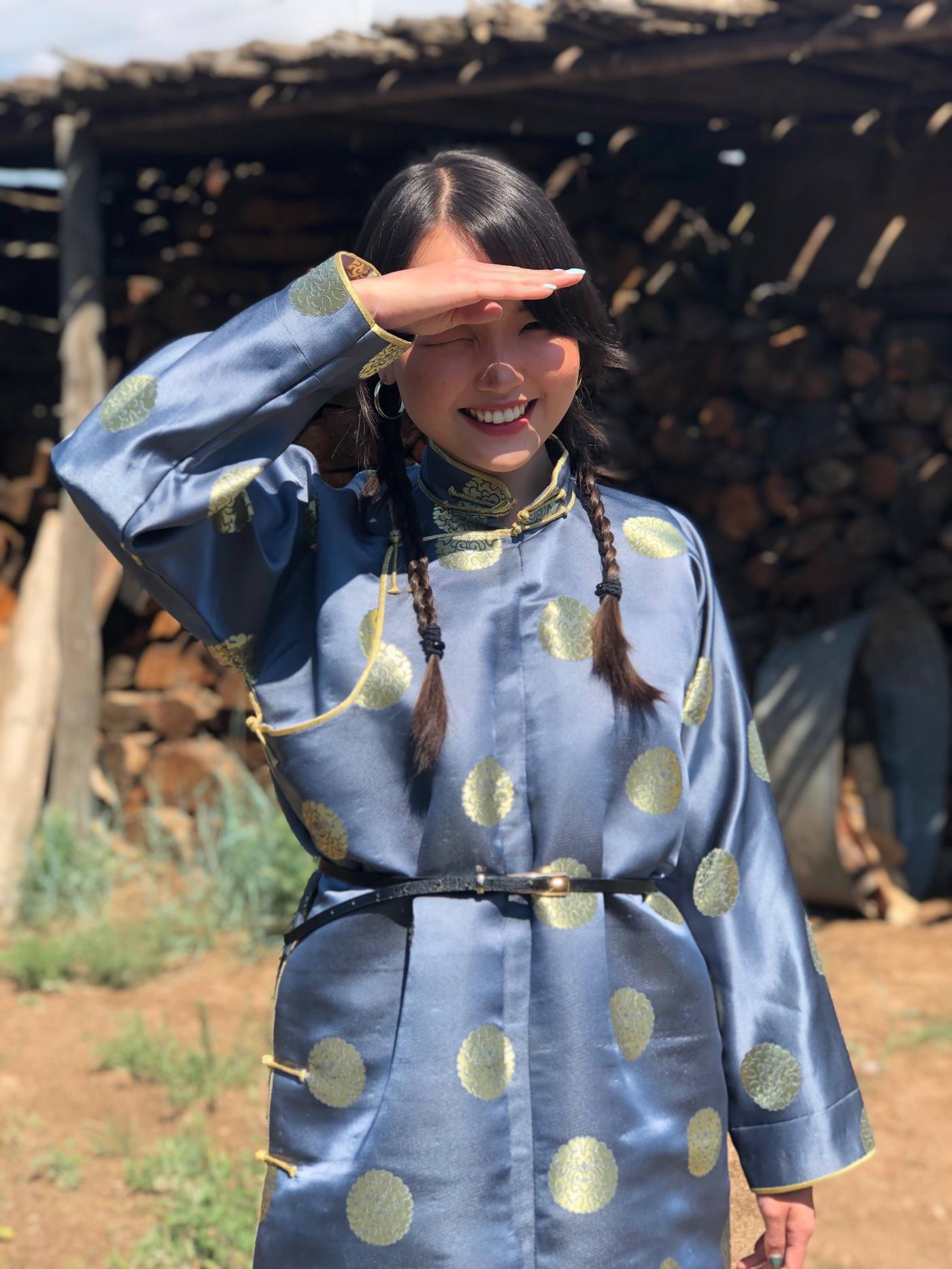 Tell us about the award you won.

It is an annual award by Garden of Hope Foundation NPO from Taiwan. It gathers girls who are doing or are interested in doing jobs for human rights, girls’ rights or against rape and human trafficking, and holds a conference among them. During the conference, each girl introduces initiatives or projects like I did and three girls are selected and receive grant to support their project. It was the eighth time that the award was given. I heard that girls from Mongolia participate in it every year and I am the fourth Mongolian girl to receive the Asian Girls Award.

From whom or how did you learn about the award?

That is very interesting. In 2017, I met a girl who previously won the award when I was attending a big conference on girls’ rights that included many girls from 21 provinces and ethnicities to introduce Canada’s girls’ right protection. I also was working as manager of the conference and had a chance to talk with that girl who had just came back from Taiwan after receiving the award. That was the first time I heard about the award. In August, the Princess Center posted on their Facebook page that the award was announced and I decided to send my files.

What made you quality for the award?

The Asian Girls Award gives three separate awards – Community Development Award, Human Rights Award and Social Innovation Award. According to the mail I received from the foundation, even though I’m getting awarded, the award is for the idea and initiative of my project and things done before. I’ve been working with Princess Center as a member, doing what we can do to develop the girls’ community in Mongolia. I think the judges considered both what I did before and what I’m willing to do in the future and gave me an award. I sent my project to them and was interviewed.

Why did you initiate the project?

The project’s name is “Buried Life” and it was first based on my interest. I’m planning to study psychology and currently learning independently. I talk to many people and I realized that every single person has problems in their lives. Old, young, accomplished or not everyone has issues. However, we don’t know that. Even family members don’t recognize each other’s problems. So I knew that I’m not alone at all and thought why can’t we be more open to each other. We always share our happy moments and memories with each other, but why not share our problems and hardships? Then I met psychology professors of the University of Sociology and Psychology and am currently cooperating with them. I wanted to end the stereotype about Asians and Mongolians that we are introverts and don’t share our feelings with each other. Mongolians almost don’t have psychological knowledge and that should be decided first. For example, teenagers go through a lot of mental and emotional problems during puberty, but they don’t have anyone to talk with them. They don’t know whether talking about their problems with their parents is correct or not. We can’t see this kind of real issue in our society as a bigger picture. We have to correct them detail by detail. I contacted psychologists to talk about how teenagers, especially girls, should address their problems and the best way to solve it is to see a professional psychiatrist.

Tell us about your project.

It covers a lot of problems. The first step is, as I mentioned, giving real awareness and knowledge about mental health issues and diseases to people, which is more important than just publicly talking about it. There are many mental conditions and diseases that we don’t even know that we have. For example, I have impostor syndrome. Even though I never knew that I had this syndrome until recently because no one told me that the syndrome exists, and how to address it. Just like this, many people are suffering from this kind of syndromes and diseases. People can develop serious mental diseases for them due to lack of knowledge. Many cases of rape, violence and sexual harassments are being recorded in Mongolia these days. People are immediately judging the abusers or criminals shouting, “Execute them”. But, finding the reason behind those intolerable actions is crucial. No one becomes a criminal, rapist or pedophile in one day. I thought that, we need to fundamentally study how these criminals’ minds developed until they become “them”. To prevent people from becoming criminal, giving psychological knowledge from a young age is needed. As such my project will try to have every general education school in Mongolia hire a psychiatrist.

I think that policy is needed to manage the human resource issue to fulfill what you wish. Are there currentlyenough psychiatrists to be employed in every school in Mongolia?

No, there aren’t enough psychiatrists, currently. Youth are not interested in psychology and even psychology graduates are not willing to work in their profession. There are different types of psychologists based on their specialization and very few people are graduating as a psyciatrist for teenagers. Many people are learning psychology as a secondary profession.

What is the reason that students are not choosing psychology? Is it about the salary?

Most people assume that psychiatrists and therapists just listen to people’s hardships and problems all day and some of them say that they don’t want to do that for their whole life. Even some students who chose the profession have that kind of mindset. But it’s not only about that. Most people think about crazy or mentally broke people when they hear the words “psychology” or “mental health”, and that must be changed. As you mentioned before, the policy on these matters is really lacking. Few years ago, the government also talked about appointing psychiatrists in every school, but it didn’t become reality. Even though progress was made, the supply is not there despite there being a demand. Mongolia really needs a complex policy.

Do you see any other solution that can replace the policy?

Well, there actually is a solution. Even though schools don’t have psychiatrists, there are lot of teachers in the school right? Every year, many students are graduating as teachers and even some professionals sometimes teach though they are not teachers. Every teacher studies psychology in university. However, the implement of the knowledge that they got from universities are not helping them. Psychology lessons shouldn’t last for only one or two semesters. It should last longer and have better quality so teachers can help troubled or abused students more. If a teacher has a very good knowledge about art therapy, it can be easier to cure students who love art. Some children don’t want to just go to someone and talk about themselves.

What opportunities have opened after you received the award?

Taiwan has a very similar problem to us. They have been trying to implement the policy like I’m seeking for years and it is not progressing. So the biggest opportunity for me is that Taiwanese institutions and researchers said that they will support and share their experience as they study from Mongolia’s experience as well. It is interesting for me that a developed country like Taiwan couldn’t solve this problem. Maybe it’s because Taiwanese people are mostly introverts. I received 1,500 USD in grant and I really appreciate it. But my project needs more money and I will seek more support from other international organizations. I will start the project and do what I can as soon as possible.

It feels ironic to me that Taiwanese people are supporting you to develop Mongolia’s community by solving its problems, but not the Mongolian private sector or government organizations. Have you contacted Mongolian organizations, if so what do they say?

I contacted few companies and organizations. They require a lot of documents since there is a lot of bureaucracy. Most private businesses value good reputation and I don’t want it to be like that. People suggest that if I want to make the project successful and famous, that I contact influencers or celebrities. But, if I do as they say, my project would be overshadowed by their identity and the true essence of it would be nullified. That thought made me decide to be independent from famous people or entrepreneurs.