Four Mongolian boxers won Olympic quotas from the Asian & Oceana Olympic Qualification Tournament, held in Qian’an, China from March 25 to April 2. Army world champion B.Chinzorig seized an Olympic quota after winning a silver medal in the men’s 64 kg category on March 31. He defeated Ermek Sakenov of Kyrgyzstan for the silver medal. On April 1, Hasanboy Dusmatov of Uzbekistan beat Mongolia boxer G.Gan-Erdene in the semi-final of the men’s 49 kg event. In the bronze medal fight, G.Gan-Erdene won against Devendro Singh and earned an Olympic quota. On the same day, gold medalist of the Asian Games D.Otgondalai fought against Japanese boxer Daisuke Narimatsu in the men’s 60 kg final and won 3:0. The victory secured him a quota for the Rio 2016. International Sports Master B.Tuvshinbat also seized an Olympic quota after winning a bronze medal in the men’s 69 kg event. He fought against Eumir Marcial of the Philippines in the semi-final and won 3:0. N.Shinebayar of Mongolia fought in the men’s 75 kg but was not able to win an Olympic quota. Over 300 boxers from 40 countries competed in the Asian & Oceana Olympic Qualification Tournament. Mongolia was represented by 12 boxers. Currently, Mongolia has four Olympic quotas in boxing. The Final World Olympic Qualification Tournament will take place in Baku, Azerbaijan from June 14 to 26. Boxers who have not secured an Olympic quota from China will have another chance in Azerbaijan.
SHARE
Share on Facebook
Tweet on Twitter
Previous article Agreements signed with sports associations to cooperate in East Asian Youth Games
Next article Ts.Tsedev-Ochir: We will never give up 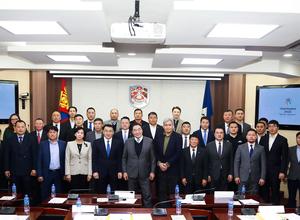