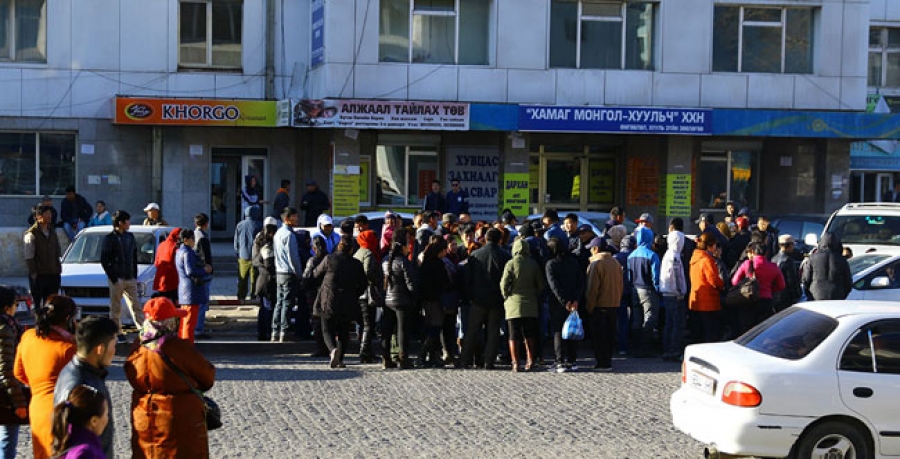 Despite last week's statement from the Financial Regulatory Commission (FRC) regarding the claiming of public shares of Erdenes Tavan Tolgoi (Erdenes TT) a crowd of public shareholders gathered in front of the Taiwan Center on Juulchnii Street to sell their shares. The FRC has stated that people don’t have the right to trade or transfer shares of Erdenes TT to others until the company’s shares are available on the secondary market, and dispelled rumors that securities accounts needed to be immediately opened for citizens to claim their shares. Local media reported that people had been gathering outside the Taiwan Center since the beginning of the last week. On April 22, at around 11:00 p.m., C1 television reported that hundreds of people had gathered outside the Taiwan Center, with people claiming that they had come from every corner of the city after hearing rumors about the chance to sell their Erdenes TT shares. One hopeful trader said, “We heard rumors that some Chinese people are purchasing the company shares at high prices.” “We registered our shares with Standard Investment securities company and have the right to sell our shares now,” another anxious seller claimed. They said that nearly 10 days had passed since a representative from Standard Investment had suggested that people would be interested in buying their shares. Officials from the FRC and Police Department of Chingeltei District spoke to the crowd, which eventually dispersed. They explained that the rumors were untrue and said that the government hasn’t yet authorized the sale and trade of Erdenes TT shares. The Police Department of Chingeltei District has opened a criminal case against Standard Investment based on claims made by their clients, and says it is investigating the company in accordance with provision No. 166.1.2 of the Criminal Law, which states that a criminal case can be opened if an entity, organization or official reports a crime and provides evidence.
SHARE
Share on Facebook
Tweet on Twitter
Previous article Pandemic control and immunization coverage to determine speed of economic recovery
Next article World Bank: Stimulus program will drive economic recovery