During the 30th Congress of the Mongolian People’s Party (MPP), held on December 6 and 7, Prime Minister of Mongolia L.Oyun-Erdene was re-elected as chairman of the party with a whopping 99.7 percent of the vote.

At the beginning of the Congress, Premier L.Oyun-Erdene presented a “new revival policy to stimulate the economy” to restore the economy amid the COVID-19 pandemic quickly by resolving hurdles in the development progress.

He emphasized that the 30th Congress, which falls on the 100th anniversary of the foundation of the first political party in Mongolia – MPP, is being organized during the most difficult time humanity has faced since World War II – the time of the COVID-19 pandemic.

The re-elected chairman pointed out, “Over the last century, MPP dedicated its operations to restore Mongolia’s independence and sovereignty and gain its recognition around the world. In the new century, we have a historic responsibility to ensure economic independence. The ruling party’s main policy will focus on reviving the economy.”

If development delays are resolved in a short period of time and the basic capacity of the economy is expanded, Mongolia will be able to reach the objectives to increase GDP per capita by 10 times, decrease the poverty rate by five times and bring the wealthy middle class to 80 percent, Prime Minister L.Oyun-Erdene noted.

“MPP will work to strengthen the penal policy for corruption and official misconduct. Declarations of assets and income shall be reviewed in conjunction with tax payments. Through the successful implementation of the new revival policy, the capacity of border points is expected to increase threefold, doubling the volume of products for export,” L.Oyun-Erdene emphasized.

“Energy capacity is planned to increase by 2.5 times and basic conditions will be created for the realization of mega development projects. By implementing these projects, job opportunities will increase by 285,000, decreasing the internal migration to Ulaanbaatar, creating more job opportunities with high salary in rural areas, and ensuring the balance between urban and rural area.”

“A total of 100 trillion to 120 trillion MNT is needed to implement the revival policy. It is clear that the government cannot raise the money alone. The main principle of realizing the new revival policy is establishing a new economic structure based on the active participation of citizens, entities, and investors. Basically, the government will play the role of supporter and provide all-round support to citizens, the private sector and investors to compete on the world stage,” Premier L.Oyun-Erdene remarked.

During the Congress, Chairman of the General Oversight Committee of the party B.Bayarbaatar reported, “Since the last Congress, 56 people have resumed membership and 42 have left the party. In some provinces and soums, party committee chairpersons imposed their views on others in the name of research and party policy.”

General Secretary of MPP D.Amarbayasgalan presented a policy to improve the participation of political parties, increase the responsibility of political parties to the people, and create conditions for them to work as a “more understandable and professional institution”.

He stressed that the party will work to improve the legal environment for human rights protection. Apparently, a team of professional researchers has analyzed about 11,900 legal provisions related to human rights. The team found out that 800 provisions may have violated human rights. In connection with this, MPP aims to amend all of these provisions and meet the needs of today’s society.

At the Congress, MPP amended its general rule to include political accountability for corruption. The party has added principles of improving ethics at all levels of party-elected officials and reprimanding officials for misconduct, according to D.Amarbayasgalan.

The general secretary said, “The party’s rule has been amended to end political support. In particular, those involved in corruption and official misconduct will not run in elections. An official who is involved in a crime and is arrested as a suspect will be automatically suspended from the party.”

The 30th Congress was attended by about 1,450 delegates. 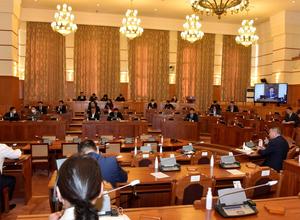