In accordance with the law, the Mongolian People’s Party (MPP), which won 62 seats in the 2020 parliamentary election, formed a caucus in Parliament and elected lawmaker D.Togtokhsuren as chairman of the caucus.

Lawmaker D.Ganbat was chosen as chairman of the Democratic Party (DP) caucus, which won 11 seats in Parliament. From 2012 to 2016, he served as member of Parliament and chaired the Standing Committee on Legal Affairs.

Lawmakers approved a resolution on approval of standing committees’ composition on the same day.

Speaker of Parliament G.Zandanshatar introduced the draft resolution on approving the composition of the standing committees of Parliament.

Lawmakers Kh.Nyambaatar and Ts.Davaasuren expressed their views on this resolution.

The majority of the lawmakers supported the resolution and approved the composition of the standing committees.

S.Odontuya was elected to Parliament two times. She has a master’s degree in international business management.

T.Ayursaikhan has a PhD in economic management. He was elected as a member of Parliament in 2016 and 2020. 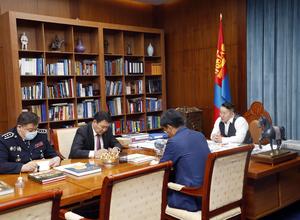