Minister of Finance Ch.Khurelbaatar boasted a very strong financial performance for fiscal year of 2018 on Monday.

“The revenue of the general state budget exceeded 10 trillion MNT for the first time in history. This is 25 percent higher than our approved projections. This achievement was possible thanks to raising 827 billion MNT for the Stabilization Fund and Future Heritage Fund in addition to the 9.2 trillion MNT revenue centralized to the state budget. As a result, fiscal revenue reached 10 trillion MNT, marking the first strong performance since 2010,” Ch.Khurelbaatar announced.

“The increased revenue from copper and coal (sales) combined with the government’s effective economic strategy helped exceed projections by 1.3 trillion MNT. The strong fiscal performance was pushed by better credit rating of the country. I have to mention that the Big Three credit rating agencies raised Mongolia’s credit rating, which led to better economic growth and higher investment. Improving to fiscal discipline and not making budgetary amendment also influenced this positive result,” the minister stated.

The government managed to save around 800 billion MNT from expenses. In particular, half of this amount was supposed to be spent on bond interest payment and the other half was saved due to delayed tender submissions for restructuring the government.

Minister Ch.Khurelbaatar gave a brief interview after the press conference.

On what will you spend the extra 12 billion MNT stashed by a strong fiscal performance?

It will be used to pay off interest payments of government loans, reserved in the State Fund.

Businessmen are worried that the depreciation of tugrug could cause serious risks in the economy. What is the Ministry of Finance doing to stabilize foreign currency exchange rates?

Mongol Bank needs to control fluctuations in the currency exchange rate. The Ministry of Finance will pay attention to two things. First, to effectively and accurately reduce foreign debt burden so that we can reduce fluctuations in foreign exchange rate in the long-run.

Secondly, the ministry will consistently focus on increasing revenue from exports. In that sense, we’re going through with a technical reform to improve supervision at border checkpoints. We believe we can influence the currency exchange rate by supporting productions of products to substitute import products.

How do you plan to pay off bond debts?

Mongolia is scheduled to pay a billion USD for Chinggis bond in 2022. This is a difficult task. The ministry is working to reduce this payment. We will report back when we have results.

By the end of 2018, the Ministry of Finance withdrew 19 billion MNT from the Small and Medium Enterprises Development Fund to “release a bond”. Can you explain why this was necessary?

The financial report of the fund says it has 342 billion MNT. Seven years ago, the ministry released securities and gave 150 billion MNT to this fund. However, the repayment has been slow. Our ministry is just getting back what we should be getting back.

Is it true that VAT refunds are being allocated to some banks in advance?

The ministry received this type of request twice before. This is illegal. We’re obliged by the law to keep personal information confidential. We don’t give confidential information of individuals and organizations even to the National Statistics Office.

Despite the ministry’s prohibition, tax agencies went through with this illegal action. In relation to this, the issue to dismiss the head of the General Taxation Department was raised. This issue will be resolved soon. 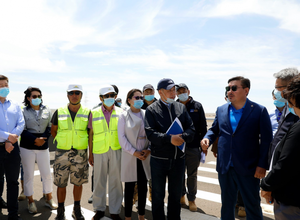