Former PM claims President Elbegdorj is a 'leader of conspiracy' 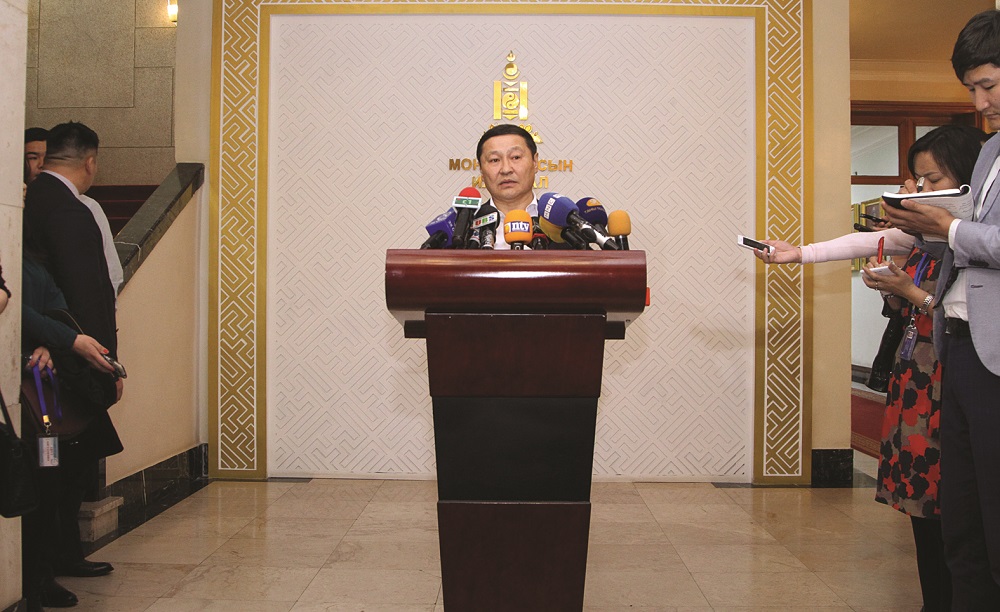 Former PM N.Altankhuyag makes statement[/caption] The former Prime Minister of Mongolia, N.Altankhuyag, made a statement on Tuesday regarding the current political situation and blamed President Ts.Elbegdorj for ruling the country under conspiracy. After the former PM made his public address, President Ts. Elbegdorj replied to N.Altankhuyag on Twitter, stating,  “I have heard  Altankhuyag’s statement. No one should fear talking about me. This is the advantage of Mongolia. Let’s work together for legal governance.” Below are excerpts from N.Altankhuyag's statement: “Mongolians will make their choices for the parliamentary elections after only two months.  The 2016 regular spring session started on Wednesday. Therefore, I had no choice but to warn the people of Mongolia during such an important period. You all have seen whether or not Mongolian authorities could provide sustainable political and state operations during the last spring and autumn parliamentary sessions, and whether Parliament is independent or not. Who is ruling the state of Mongolia anyways? I have made several offers to resolve the current problems regarding the country’s national security and independence through closed meetings, however. I could not find success. Thus, I have been left with no choice but to state some of these issues publicly, which should have been brought into discussion during closed parliamentary sessions. “The actions of these conspirators, who play with the innocent’s destiny by organizing false convictions, have crossed the line. The conditions for potential conspiracies have already formed to perform organized, scripted political dramas and to form a falsely organized Parliament in the upcoming political elections. “The current economic crisis is rooted in a crisis of justice. The crisis of justice has loomed over the Government of Mongolia.  The plotting government has gained power behind the scenes, making the governance of Mongolia look weak and powerless. Greedy people, who have no love of country, are abusing their authority for their personal interests, quelling the desire of Mongolian citizens to live well in their homeland, even overthrowing the government and messing up governance. They are explicitly stealing money, businesses, and licenses by discouraging and threatening the wealth creators with jail and law. Even public servants who are working for the state are being falsely convicted, suffering from a loss of reputation and life. “Authorities are libeling everything the Democratic Party (DP) created and executed, and are still intentionally tarnishing the DP by claiming that the DP is not carrying out governance properly and claiming that it does not do anything, dividing into factions  within the party. “The plotting government creates factions and uses legislative bodies for their dirty purposes, creating a tunnel with a few people in the legislative bodies. They are wiping out the ones they don't like, who it is impossible to join their pledge, by convicting them under fictitious claims without using the scales of justice. They are holding back the decision making power of some authorities by making threats. These conspirators have gained authority with the potential to endanger the independence of Mongolia, and are behaving arbitrarily and making arbitrary decisions. This was proven when they took the government authority illegally by overthrowing the New Government of Changes through conspiracy. “These conspirators halted the construction projects which were underway in favor of the lives of Mongolians, made people who worked for the people of Mongolia convicts, threatened citizens with debt, created chaos, divided the nation, and deliberately created anarchy in all things. It is time to tell them to stop the overindulgence and stop the unashamed attempt to divide Mongolia into pieces to own it. "Today, I am left with no choice but to announce the name of one individuals who is organizing all these conspiracies. Even though everyone knows who is it, no one is brave enough to name that person. People are afraid to be dragged into the tunnel of unfairness and to be repressed. However, I have decided to announce the name of that person, for the sake of Mongolia’s interests. “That person is the President of Mongolia, Ts.Elbegdorj, the person who won an election by calling on the nation to be fair. I have no doubt that after my statement, Ts.Elbegdorj and his billionaire partners - who were born from the government - will perform a play, asking the nation for help to combat corruption and blame me for creating a barrier in his effort to combat corruption. “My statement can cause harm to my life, to my family, and to the people close to me, but I have no fear. It is time to save the democracy. It is time for the nation to leave fear and discord behind.  The time has come for the corrupts to over speak lies, to jail friends and to scatter the party and people. "Mongolia has a great destiny. The people of Mongolia are far-sighted. Mongolia exists because of patriots who are willing to devote everything to their country. Mongolia will exist independently in the future. I am calling on my supporters, members of the DP and its followers, and the people of Mongolia to join the fight for justice."
SHARE
Share on Facebook
Tweet on Twitter
Previous article President responds to Constitutional Court letter
Next article Justice ministry to cooperate with NHRCM to monitor human rights