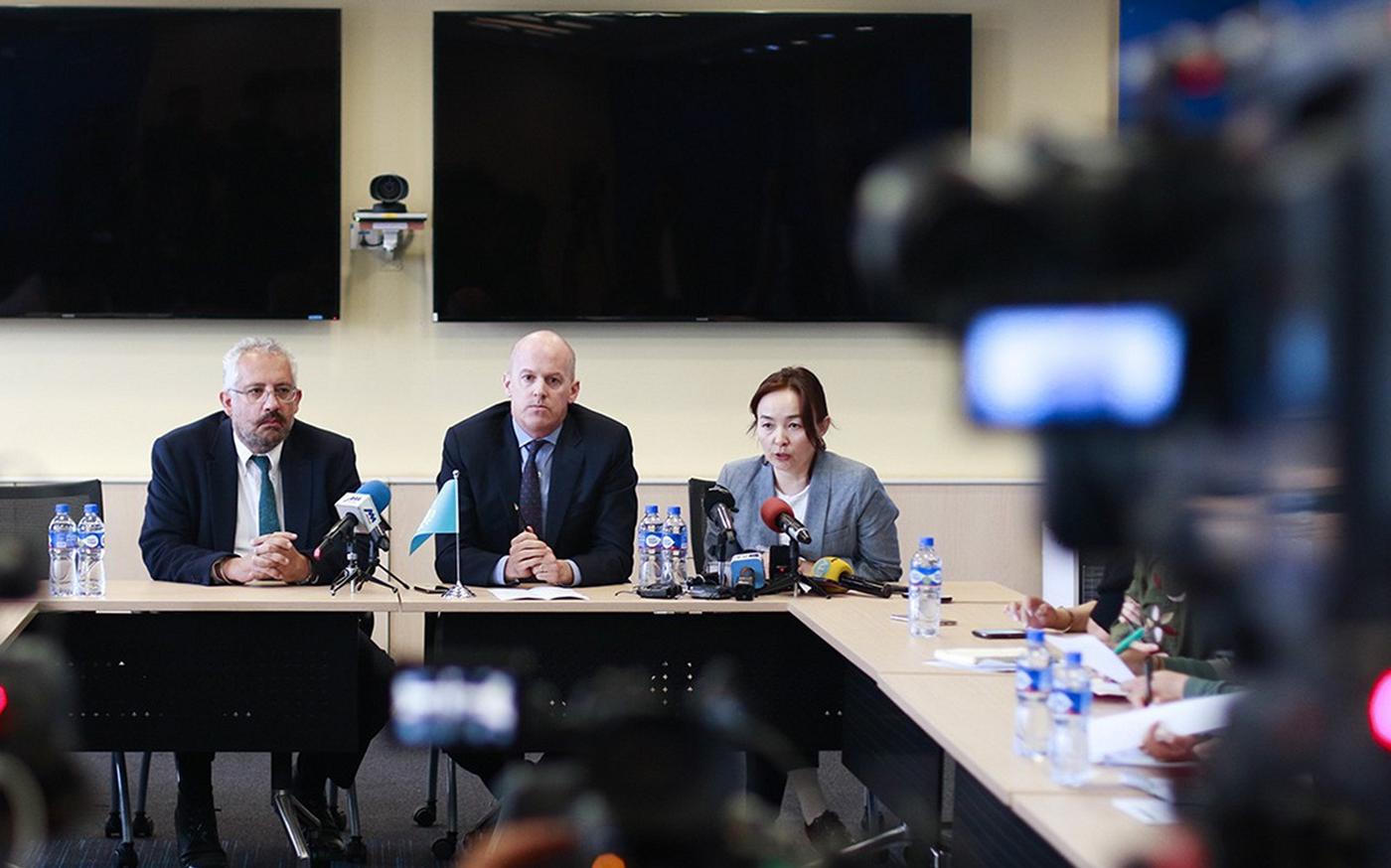 An IMF staff team led by Geoff Gottlieb visited Mongolia from June 19 to 28 to conduct discussions for the 2019 Article IV consultations, a regular checkup on the country and its ongoing Extended Fund Facility (EFF) arrangement.

The UB Post interviewed IMF Deputy Division Chief of Asia Pacific Department, Geoff Gottlieb, before he returned to IMF headquarters in the USA. In the following interview, he sums up his latest mission to the country and delves into recent delays of EFF, Mongolia’s macroeconomy and the future.

First of all, can you summarize the key findings from your mission?

Sure, we have just completed the Article IV Mission, which is a regular check up on all of our members. In some countries, it is conducted every year but in Mongolia, it is done every two years because of the (EFF) program. We found significant progress relative to where we were two years ago. Part of this is that the economy has rebounded very sharply, largely due to better external conditions. Authorities have used that to stabilize the economy, achieving much better fiscal performance, sharp fall in public debt, and a big increase in international reserves.

Due to booming tax revenues and relatively contained expenditures, the fiscal balance has improved by 18 percentage points and public debt has fallen 13 percentage points to 75 percent of GDP. On the external side, the central bank has used the strong turnaround in exports and foreign direct investment to increase net foreign exchange reserves by three billion USD since end-2016.

We’re very encouraged by the progress as the economy is much less vulnerable than it was two years ago. But I think that our main finding is that a lot more work remains and the economy continues to be vulnerable. We’re worried about both changes in external conditions and excessive loosening in domestic policies, particularly related to the election.

What do you recommend Mongolia should do to strengthen its economy?

For sufficient debt reduction, Mongolia should target a primary balance of at least one percent of GDP in 2019 and two percent of GDP thereafter. Tighter monetary policy and macro-prudential measures can ensure credit growth supports macro stability. Tighter supervision by the Financial Regulatory Commission is necessary to rein in excessive non-bank lending.

Deep structural reforms will help reduce Mongolia’s susceptibility to boom-bust cycles. Enhancing the fiscal rules framework is important to protect fiscal discipline in the coming years. Developing the transport infrastructure will strengthen the export sector. A well-capitalized banking system will be essential to finance young companies that generate growth and jobs. Finally, re-orienting public spending towards health and social protection will reduce poverty and ensure that the dividends of higher growth are more widely shared.

Since January, there hasn’t been an update on the Sixth Review of Mongolia’s EFF. What’s the cause of this delay? Has it been resolved?

We visited Mongolia last November as part of the sixth review and at that time, we found that while there was progress in many areas, the key reforms in the financial sector were not yet complete. We outline two steps the government needed to take before we could complete the sixth review and proceed with the disbursement.

First is that banks that have been identified by the Asset Quality Review as having capital shortfalls needed to raise the full amount of capital that the Bank of Mongolia requested in May 2018. The second issue is that when we looked at the capital that has been raised, we had some questions about its integrity – whether it was consistent with international laws and regulations. As a result, we also asked for a forensic audit by an international third party to look over those transactions just to make sure they were consistent with local laws, regulations and best practice. These steps have not yet been completed and as a result, the program is delayed.

If these delays continue, what kind of economic risks could Mongolia face? Is it ok for the review to be halted for this long?

We do not predict an imminent economic crisis as a result of these issues. The fiscal accounts, again, are much stronger so there isn’t an immediate public debt payment. Foreign exchange reserves are much stronger and economic growth is very high. It’s more of financial sector issues that can create a crisis down the road if not addressed. There’s also a concern that if there is a problem elsewhere such as falling commodity prices, that’s when you need the capitals on the banks to be extremely strong. Now is the time to address that. You do not want to wait until growth is falling to try to strengthen the banking sector.

What will happen if a problem is found through the forensic audit? What kind of action will be required to take?

There may be a number of consequences. From our perspective, we’re mainly focused on one consequence. If the capital raised has not been done in a manner consistent with laws and regulations, we would expect the capital of that bank to be adjusted accordingly and that the amount the bank is required to raise is made larger than it otherwise was.

If the Bank of Mongolia learns of other things during the forensic audit, it is up to the bank to decide what to do.

Mongolia is meeting all of these targets. How are these changes really impacting people on the ground? Are people’s standard of living improving as a result of EFF?

But that is not enough. In the past two years, we’ve seen economic growth rise very quickly but also seen big increases in household debt and relatively modest reductions in the poverty rate. Clearly, more needs to be done. There are three things that I would focus on improving this. First is macroeconomic stability. The second thing is that there needs to be much stronger investment climate. There is no reason for so much investment in Mongolia to be dominated by one project. Mongolia has much more potential than that and I know that a lot more foreign investment would be eager to come if investors were confident in the investment climate. I think the third issue is the budget itself can continue to improve in terms of how it supports the most vulnerable. More can be done on health spending as well as targeted spending that compliments the child money program and goes to the most vulnerable people in Mongolia, particularly in the ger district.

Experts keep saying “more can be done” but what is “more”? Are the mechanisms in place not enough?

The IMF focuses on macroeconomic issues. Our colleagues at the World Bank and Asian Development Bank have a lot to say about microeconomic issues, including things like infrastructure. From a macroeconomic standpoint, a huge increase would happen if we just avoided some of the policy slippages of the past. For example, the Price Stabilization Program of the central bank over the years prior to the IMF’s program, was incredibly destabilizing for Mongolia. It put huge pressures on the balance of payment and exchange rate and reduced the purchasing power of Mongolians. It’s one of those things that seems to support growth for a very short run but really undermines everything Mongolia wants to achieve over time.

Our first priority is avoiding these mistakes. If Mongolia can have a sufficiently tight fiscal and monetary policy, avoid the quasi-fiscal spending – Bank of Mongolia and Development Bank of Mongolia – and have a stronger banking system, you will already have a much stronger environment for economic growth and for all Mongolians. Beyond that, the single biggest thing is conveying a more confident environment for foreign investment.

Mongolia has made many reforms under EFF for its fiscal and monetary policies. Moving forward, how secure are these critical reforms? Are they sustainable changes in the coming election?

I think that’s really a question for Mongolian policymakers and the Mongolian people. What’s happened in the last two years is that for example, the fiscal balance has improved a lot and there have been structural reforms to both fiscal policy and monetary policy. There are now better guidelines on public investment on the fiscal side and there’s the Central Bank Law and Banking Law on the banking side. So the challenge going forward is making sure these laws are respected and maintained. That is a source of uncertainty and it’s going to be very important for the voices that want to these reforms to continue to win out over the course of the election.

It’s very important for the Mongolian people to ask policymakers what they will do for them not just in that quarter but over time.

I also wanted to comment that Mongolia has been in this kind of situation before where it got an IMF bailout. This has become cyclical in a way. How do we ensure that we’re not here again when the next economic crisis hits?

There are some people that I meet here who think that a third party, an international entity, is always needed here. I think that the Mongolian people are very capable of doing this without a third party but I do understand that there’s a lot of opportunities for exchange of information and ways that the IMF can support policy reformers and help them strengthen their hand in things that are good for Mongolians in the long term. There are many ways of having engagement with the IMF through which we can help and encourage people to develop policies in a better direction. We will continue to stand ready to help in any way Mongolia wants.

Lastly, I want to ask about the disbursement of EFF financing. As the completion of the sixth review remains delayed, how will the remaining amount be provided? What will happen if the full amount isn’t disbursed by the end of the program in 2020?

Under the IMF program, there was expected to be 12 quarterly disbursements for three years. We have disbursed five of them. At present, because of this delay, it will be difficult to do this before the program expires in the May review of 2020. If the authorities quickly implement the prior actions pending for the sixth review, it’s possible that we could double up some of these reviews but it may require more time, which would require an extension of the program. That is just an issue up to the Mongolian authorities. But again, the key message is, if they do the two prior actions up for the sixth review, we will move quickly to try to bring the disbursement through our board.