Over 40 percent of the Mongolian population is settled in Ulaanbaatar, causing serious air pollution and traffic problems among numerous other challenges. We’ve been told about these issues so many times from different perspectives but most of us are sick and tired of them. However, it seems this headache of ours might soon be over as decision makers finally move forward with long-awaited plan to create sub-centers, which would ultimately resolve most of the problems caused by overpopulation in the capital.
The government has started a program to build eight sub-centers across Ulaanbaatar through the 2020-2040 Ulaanbaatar Development Action Plan. For starters, a program called the Ulaanbaatar Urban Services and Ger Areas Development Investment Program was prepared by GHK Consulting Limited under an Asian Development Bank (ADB) funded technical assistance to the government.

It aims to establish a network of well-developed six sub-centers providing economic opportunities and urban services that have a low impact on the environment and would improve living conditions of local residents. The program is geographically targeted, multi sector intervention to upgrade priority economic and service hubs.

The nine-year program is estimated to be completed by 2022 or early 2023, and expected to directly benefit 400,000 people in Ulaanbaatar as well as indirectly benefit the whole city. The program is supporting the redevelopment of six sub-centers — Bayankhoshuu and Selbe under Tranche 1; and Khaniin Material, Market Area, Amgalan and Uliastai are tentatively included under Projects 2 and 3. Through the program, these sub-centers will get expanded roads and services; improved water supply, sewerage, and heating; increased economic and public services; improved connectivity; more efficient service providers; and institutional strengthening and capacity building.

The total program cost is approximately 320 million USD, which will be provided by ADB, the European Investment Bank and Ulaanbaatar Mayor’s Office.

The team first went to Kindergarten No. 261 in 8th khoroo in Bayankhoshuu.

This sub-center will cover 7th to 10th and 21st khoroos in Songinokhairkhan District, stretching 162 hectares of land in total. For the first tranche, the program is building engineering systems for water supply and heating, power substation, information and technology network center, and social facilities. Within this scope, Kindergarten No. 261 was put into operation last December for 240 children.

Kindergarten director G.Chantsaldulam said, “We’ve been operating for over a year. Our main goal is to take in children living in remote areas who weren’t able to enroll into a kindergarten. This year, we’re educating 350 children in 10 classes. We have more than adequate space and resources to increase our capacity.”

The kindergarten is 2,444 square meters in size and has an 8,300-square-meter playground. All of its classes have sleeping areas and bathrooms each. The kindergarten director underlined that workload is relatively low as classes have less than 35 children respectively. The preschool education facility hires well-educated people who were unemployed in 8th khoroo. To date, the kindergarten operates with 41 staff members, 22 of whom are permanent and assistant teachers. The director shared plans to continue to grow vegetables in their greenhouse and further improve their vicinity.

Teacher B.Solongo said that she got the opportunity to get her two children enrolled into the kindergarten when she was hired.

“The Arts Council of Mongolia provides workshops on making stationaries and other useful learning materials using recycled materials to our teachers. The council also taught low and middle income mothers how to make accessories and jewels. Some started making a living by selling their handmade accessories. I also benefited from this job. Now that I have found a job near my home, my husband doesn’t need to take our children to faraway kindergartens, which allowed him to get a job,” she said.

Right next to the kindergarten, a business incubator with a capacity of 320 students has been opened through the program as well. This center organizes vocational courses, provides certification, assists small and medium enterprises upgrade their products and services, and supports startup businesses. For instance, the center runs short-term classes with the Polytechnic College of Technology and allows people taking courses to intern at companies involved in the Ulaanbaatar Urban Services and Ger Areas Development Investment Program.

A new branch of the State Services Center has been launched on the first floor of the business incubator along with some banks to bring state and banking services closer to residents.

The program plans to build a power substation, water reservoir, a water pumping station and information and technology center around Kindergarten No. 261. A power substation is planned to be constructed 100 meters from the kindergarten, heating system within 7.6 meters, clean water supply system five meters, and sewerage system 8.8 kilometers from the kindergarten. A 6.5-kilometer road will be paved in a nearby ger area, according to ADB specialists. Prior to building the road, program contractors have completed engineering network, built a 2.3-kilometer dam, and improved landscaping of 4.65 hectares of land. Next, the program plans to build a water reservoir and pumping station with a capacity to hold 1,000 cubic meters of water.

To build the road and engineering system, the city administration and ADB have relocated 338 families. Each family was compensated 65,000 MNT per square meter, according to the program’s supervision and evaluation specialist N.Boloroo. She added that locals weren’t keen to give up their land, which was required to build the business incubator and kindergarten. However, 27 families that needed to be relocated agreed to move when a temporary residence for 50 families was established.

N.Boloroo stated, “Originally, compensation for families in Selbe was set at 65,000 MNT per square meter and 45,000 MNT per square meter in Bayankhoshuu, which angered residents. Therefore, we set a fixed rate for compensations. However, families received different amounts depending on the size of their property. In any case, most of them improved their standard of living and are living in apartments in the city center, while others bought houses.”

Within the scope of the program, a total of 944 families had their properties evaluated and 856 have already received compensations. At present, land eviction of the Bayankhoshuu sub-center is progressing at 97 percent completion rate, according to ADB. Overall, the program’s first tranche aimed to transform Bayankhoshuu and Selbe into sub-centers has achieved 71.6 percent completion rate. In other words, the improved engineering infrastructure will enable the program to advance to housing stage.

Through the Ulaanbaatar Urban Services and Ger Areas Development Investment Program, 156 hectares in Selbe have been connected to clean water and sewerage systems as well as heating and electricity networks.

Next, the ADB team visited 13th khoroo of Sukhbaatar District where a 28-megawatt thermal power plant is under construction.

Engineer Kh.Tsolmonbayar, who is working on this thermal power plant subproject, reported that the construction work began in July 2017. Khurd LLC is building this plant with three stoves and the construction work has progressed to 52 percent completion rate. Within this scope, 14 water supply and heating substations have been established along with 4.4-kilometer pipeline.

By putting it into operation, the thermal power plant will connect 3,000 families and over 100 entities in Sukhbaatar and Chingeltei District to the central heating system. It will also help reduce air pollution in the city, according to project implementers. The plant is projected to use 30,000 to 40,000 tons of raw coal to heat homes. Specialists underlined that this will cut down coal consumption of 3,000 families and over 100 entities by three-fold. The plant will be equipped with modern technology that completely filters produced toxic air pollutants, sulfur dioxide and nitrogen dioxide.

Apartment complexes for 100,000 families will be built in 100 hectares of land in Bayankhoshuu and Selbe sub-centers, according to Arnaud Heckmann, senior urban development specialist for ADB. He said that green, affordable, low-carbon, climate-resilient homes will be provided to locals through the program.

For starters, apartment complexes for 1,000 families are planned for commission in 10 areas in each sub-center. Heckmann says these green housings and new engineering infrastructure will definitely reduce the number of stoves used in ger areas, the root cause of air pollution. However, residents must first vacate their current homes and cooperate with program implementers. Once engineering infrastructure is developed, the program will move to build educational and health institutions.

Some of these apartments will be community buildings or rented out to low-income families, another portion will be affordable housing for middle income families, and the rest will be sold at market rate. Heckmann confirmed that 70 percent of the housing will be built by private companies and will be used for commercial purposes. The sales will be handled by the Ulaanbaatar Housing Corporation.

The project hasn’t selected builders yet. 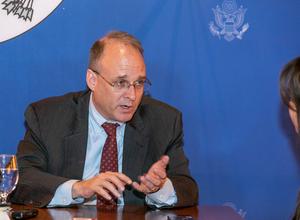 It’s ‘definitely’ possible for Mongolia to get off the grey list by 2020, says US senior official