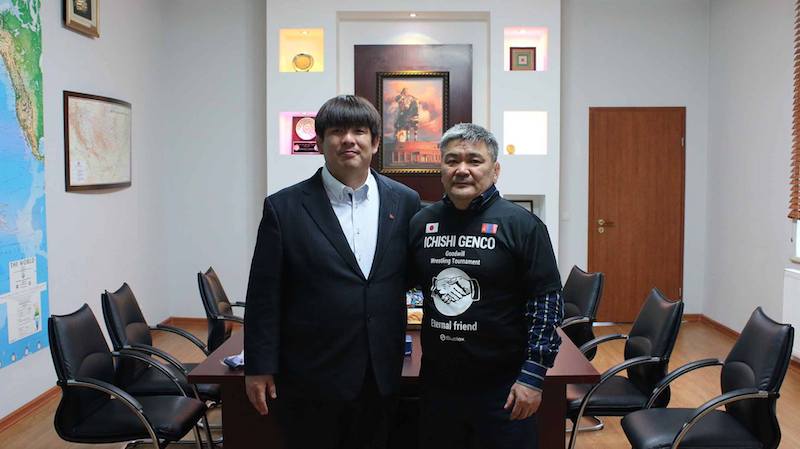 President of the wrestling federation of Tsu city of Japan visited Mongolia by the invitation of Genco Wrestling Club last weekend. Wrestling enthusiasts know him as the brother of three-time Olympic champion and 13-time world champion freestyle wrestler Saori Yoshida. Genco Wrestling Club is working with world-renowned wrestling clubs to prepare future champions and promote Mongolian wrestlers to the world. Hidetoshi Yoshida visited Mongolia in conjunction with the club’s aims. Yoshida gave an interview to Assa.mn. during his stay in Mongolia. How have you come to work with Genco Club? There are so many wrestling clubs. Why did you choose Genco? I accidently met the heads of Genco Club. Coach of Genco Club S.Munkhsukh was sitting in front of me during the 2015 World Wrestling Championships. That was when we first met. He offered to cooperate with me. After that, 17 Mongolian wrestlers came Japan and competed in the International Junior Wrestling Tournament, in honor of my sister Saori Yoshida. What's the purpose of your visit to Mongolia? Did freestyle wrestling bring you here? Yes. I came to Mongolia to make contribution to the cooperation between Mongolia and Japan through freestyle wrestling. I have talked about sports with a number of people since I came. I think Mongolians love sports and support athletes. I believe any kind of sport can be developed in Mongolia. What do you think about Mongolian wrestlers’ skills and technique? Do you have any comments? Mongolian wrestlers’ skills and technique are developing year by year. Mongolians have great experience in wrestling that dates back to ancient times. Mongolia won its first Olympic gold medal in judo. Judo is a form of wrestling. Mongolia and Japan held a joint training in Japan. At the time, I carefully observed Mongolian wrestlers. They learned everything we taught very fast. Japanese wrestlers’ toughest opponents are Mongolians. Japan is leading the world with judo ratherthan freestyle wrestling. Do you plan to cooperate with the Mongolian Judo Association? I am aiming to reach certain results in freestyle wrestling through cooperation. We have an opportunity to cooperate with the Mongolian Judo Association for sure.

"Mongolian wrestlers’ skills and technique are developing year by year. Mongolians have great experience in wrestling that dates back to ancient times. Mongolia won its first Olympic gold medal in judo. Judo is a form of wrestling"

When did you start freestyle wrestling? I am 35 years old. I started training in freestyle wrestling when I was five. At the time, I chose wrestling to become a great wrestler like my father. I am continuing my father’s deed, however, I didn't reach my goal to become a world and Olympic champion. Your father is Olympic and world champion Yoshikatsu Yoshida, who used to work as the coach of the Japanese national wrestling team. Did your father influence you to become a coach? Yes. Me and my families’ lives are connected to freestyle wrestling. There are no wrestling enthusiasts who don't know my father. I wanted to become a great coach like my father. That is why I chose to become a coach 15 years ago. Six of your trainees have won Olympic quotas. Did this encourage you? Yes. Freestyle wrestling is highly developed in Japan. It is not easy for six trainees of a coach to win Olympic quotas. I am very proud of my father. These six athletes came into the wrestling world when my father was the coach of the Japanese national wrestling team. Three-time world champion Eri Tosaka, three-time Olympic and 13-time world champion Saori Yoshida, and silver and bronze medalist of the World Championships Sara Dosho started training under the guidance of my father and me when they were children. Three more wrestlers, three-time Olympic and 10-time world champion Kaori Icho, silver medalist of the World Championships Risako Kawai, and Rio Watari came to me when they were university students. I heard that your club has few trainees. Why? I pay attention on quality not quantity. I can communicate with everyone very closely. I have 15 students in my club. Ninety percent of them won the All Japanese Wrestling Tournament. Your sister Saori Yoshida won many international tournaments. Which one made you happiest? I was very happy when she won a gold medal at the London 2012 Summer Olympics. My father coached her and my family watched the tournament. I always feel happy when my sister wins.
SHARE
Share on Facebook
Tweet on Twitter
Previous article Ts.Tsedev-Ochir: We will never give up
Next article Ex-Olympian Gan-Erdene inks Promotional pact