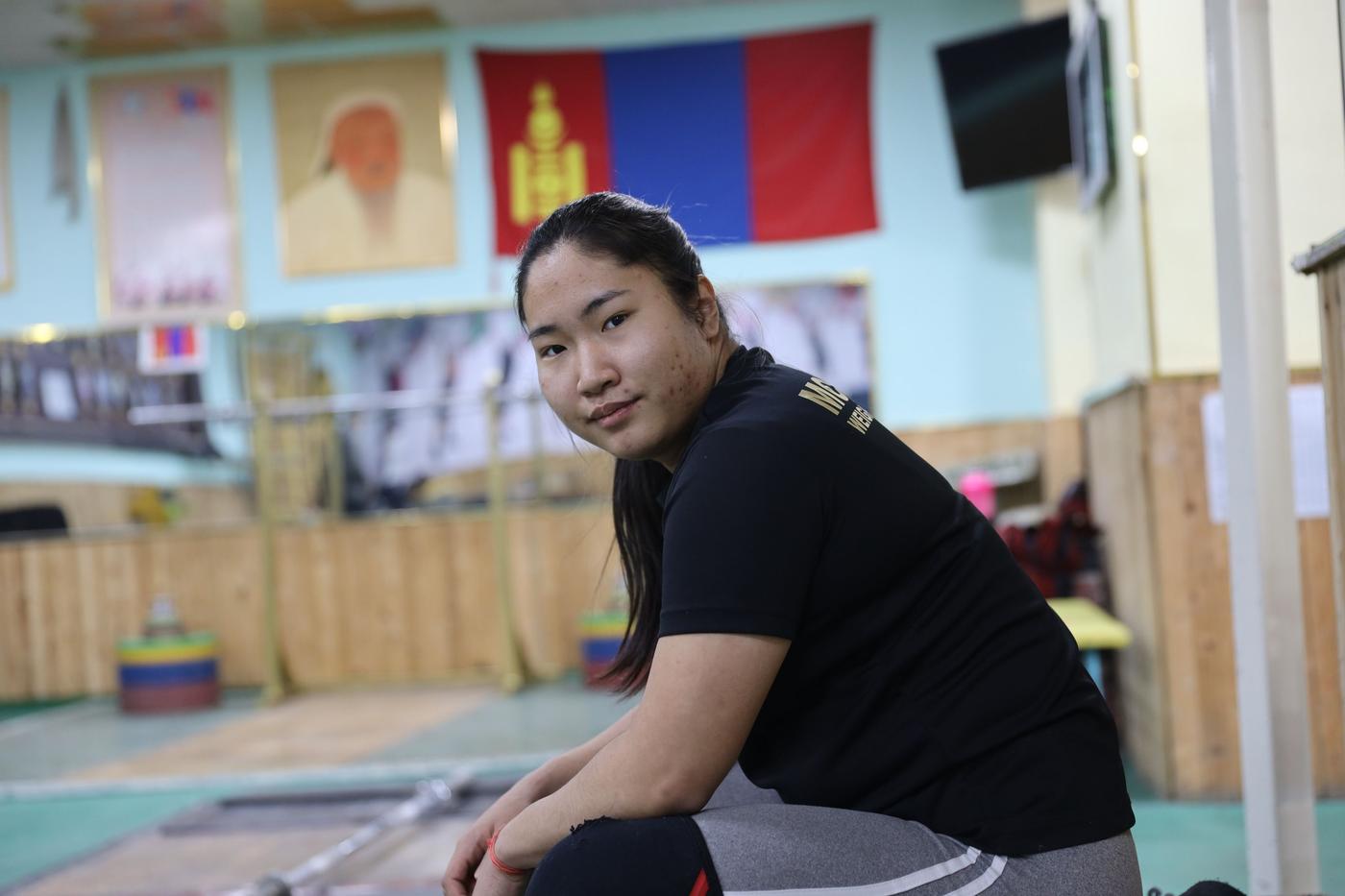 Member of the Mongolian national weightlifting team and Khilchin Sports Club G.Enerel is a role model for her generation. She began her athletic career under the guidance of coach D.Chinzorig and brought home bronze from the 2018 Asia Fitness Conference’s Thai Powerlifting Open in Bangkok, Thailand. She traveled a lot that year and won another medal at a continental competition the following year at the Youth World Cup in Las Vegas under the leadership of coach Kh.Odkhuu. She will compete in the adult category next year. Unuudur newspaper interviewed G.Enerel who is preparing for the Asian Championships next spring in South Korea.

It was not easy to get a hold of you. I planned on inviting you for an interview months ago, but your phone seemed to be disconnected.

Last month, we trained far away from Ulaanbaatar in a place called Khonkhor. In addition to hard work, an athlete achieves success through discipline. State Honored Coach Ts.Khosbayar keeps athletes away from mobile phones during training and pays attention to their sleep, food and resting schedule. When you are away from your phone, you don’t get distracted by social media and your brain gets to rest well. I am the youngest girl in my family. My brother and sister live with their own families. I told them, “Don’t be surprised if I don’t call because I’ll be training.”

The national team has participated in continental and world competitions. Do you sometimes find it difficult to lead others when your coach is not around?

I get excited when I see other athletes win medals at foreign competitions. Mongolian powerlifters have never won a medal at the Asian Championships in the adult category. State Honored Athlete M.Ankhtsetseg was the only one who came home with a medal. She became a role model for many athletes and motivated them toward achieving success. When our coaches and older athletes go abroad, we are left in charge of the training. Before leaving, my coach tells us, “Train carefully and responsibly by yourselves. You will not be able to improve effectively if you don’t practice.” My colleagues and I are all good friends. We understand each other’s pain and happiness, share our joys and sorrows and give advice to each other when we make mistakes.

You will compete in the adult category next year. Are you excited to get to know other foreign and domestic athletes?

I will turn 21 next year. My goal is to win the Asian Championships to be held in South Korea next spring. I must remain focused on my goals every day and work harder than ever before. Many factors influence the success of an athlete. During training, it is necessary to keep your mind calm, as well as properly manage your sleep schedule, nutrition and resting time. There will be an adult contest in Khentii Province on January 7 and 8. I really liked Dadal soum. Previously, when the National Youth Championship was held there, participants stayed in student dormitories. At that time, the children supported and encouraged us and enthusiastically watched the competition. It was quite enchanting to participate in the competition in the quiet and peaceful environment of the province.

I heard that you disliked powerlifting and used to run away from it. Can you tell us about that?

Some parents do not like their daughters practicing strength sports. On the contrary, my family supported me. In the beginning, I used to run away because I didn’t want to train. In 2014, as soon as summer vacation started, I started to train in powerlifting. Ts.Maamchuluun, who won the World Senior Powerlifting Championship, is my relative. While I was training under his guidance, my family discussed whether I should choose judo or powerlifting. One day, my father introduced me to powerlifting coach D.Chinzorig. After two days of training, I really didn’t like it, so I used to run away from this sport. One day, my father talked to the coach and found out what was going on. Then a month later, a powerlifting competition was held. I was enamored by the moment when the athletes won their medals and the announcements of them breaking the national record and setting a new one. That competition changed my mind and made me want to practice.

Coach D.Chinzorig must have been very happy when you came back.

I was 12 years old when I first started training. Since then, I have had no time to play with friends or celebrate holidays together. When I was a child, I missed my friends a lot. When I saw children running around laughing, I was jealous that I couldn’t play like them. When I was busy with training and competitions, my peers stopped asking, “Do you want to play together, watch a movie, or celebrate your birthday?” I used to visit my grandparents every day, but after becoming an athlete, I only visited on weekends. Since last year, I have been making time for myself and seeing my friends occasionally.

It seems that you participated in quite a few foreign competitions in 2018. For athletes, that feeling of going to another country for the first time becomes an unforgettable memory. Was it the same for you?

When I participated in the 2018 Asian Youth Championship in Uzbekistan, I was so excited that I couldn’t sleep the night before the competition began. It was my first time competing in a foreign competition. I was so nervous and could not win a medal. The next day, I went to Thailand to participate in the World Championships. I was overjoyed when I won a bronze medal in Thailand. My coach paid a great deal of attention to my training. Shortly after the competition, I participated in the Youth Olympic Games in Buenos Aires, Argentina. Out of 12 athletes who competed there, I was ranked seventh.

The following year, you took part in the World Championships in Las Vegas and won a bronze medal, right?

Yes. When I set foot there, I knew I would be coming home with a medal. That year, I did not attend classes for a whole semester. Many people had high hopes for me, so I had no right to return without a medal. Fortunately, I came home from the World Championships with a bronze medal. At that competition, I tried to lift 104 kilograms on my second attempt but couldn’t do it. I had only one shot left to win a medal. Therefore, I asked to lift 101 kilograms instead.

Who is your role model?

Among my peers, I study the success of the Uzbekistani athlete who won the World Youth Championship in 2018. She doesn’t compete in my weight class, but we see each other at every competition, so we know each other. Recently, Vietnamese athletes are becoming famous. Athletes from Japan and South Korea have good technique. You can see them lifting weights easily and effortlessly in competitions. Athletes of each country have their own unique characteristics. Even the emotions during competitions are different. I am emotional, quick-tempered and humorous. I always like to have fun with my parents at home. They get rather bored when I am away.

What is your dream?

I have many dreams. I want to become a World champion and win a medal at the Olympic Games. In addition, I want to live and study in Japan. I loved the development of the country when I trained together with the athletes there. I like to watch anime in my spare time and dream of becoming an artist. During my free time, I listen to South Korean band BTS a lot. I think that if I become an Olympic or World champion, I will present my medal to one of them as a fan.

How did powerlifting help you develop?

My fellow athletes who trained with me told me that when I first came to learn powerlifting, I was a tough girl who did not give up easily. I learned a lot by becoming an athlete and learning from my colleagues. Every year, my wishes, dreams and views change, but I feel that I am becoming calmer and more tolerant than before.

Out of all the countries you visited, which country did you like the most?

I liked Las Vegas. Everything was open there, everyone was free and the casinos were developed, making it feel like a country of entertainment. The World Championship was held on the first floor of the hotel where we stayed.

I also really liked Greece. While participating in the World Championship, I enjoyed looking at the sea from the window of the hotel where I stayed.

Do you have anything special planned for 2023?

Last year, our national team was lucky and successful. Their success in winning medals at continental and global competitions has inspired us and given us the energy to achieve our goals this year. On this occasion, I would like to express my gratitude to my coaches, colleagues and my parents and friends who have supported me, as well as the staff of the Khilchin Sports Club. I wish you all a bountiful, healthy and happy life!