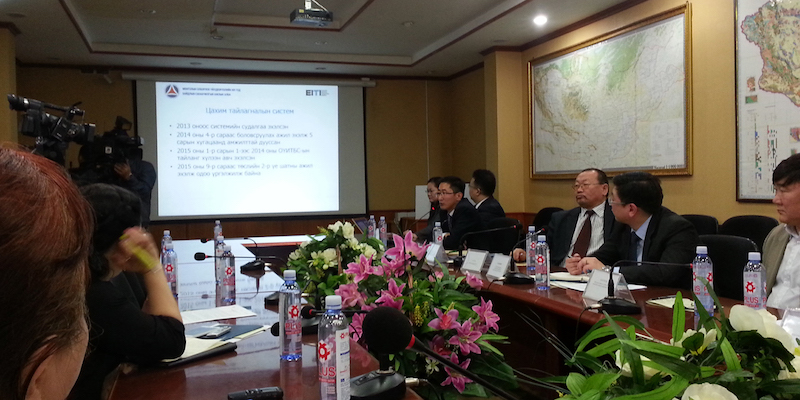 The Mining Ministry reported on the launch of the electronic data system of the Extractive Industries Transparency Initiative (EITI), and highlighted that all information related to the nation’s mining sector, including special licenses, production, sales, tax payments, donations, and support, are now centralized and available to the public. Mongolia first joined the EITI in 2006, and since then has been publishing EITI reports for international and domestic audiences. The Ministry reported that since 2006, a total of 4,701 entities engaged in mining, oil, and uranium activities have released reports, making transparent information about company tax contributions. The government has reported on tax income from 6,858 entities. Mining sector representatives underlined that when they were publishing their reports on paper, it required many materials and was time consuming, that the reports weren’t always accurate, and the value of the information and access to it was poor. From 2014 to 2015, Interactive LLC has been implementing the project to introduce the EITI electronic reporting system in Mongolia, with assistance from the Adam Smith International Institute, to provide integrated electronic EITI reports to the public and to improve the comprehensive reporting of mining sector information. Information Technology Advisor of the EITI G.Ganbat said, “We started conducting studies on the electronic reporting system in 2013. In April 2014, the system processing work started and was successfully completed within five months. Staring from January 2015, we started receiving EITI reports, and the second stage of the work started in September 2015 and is now ongoing.” Senior Counsel from the European Bank for Reconstruction and Development Paul Moffatt underlined, “Our bank has been consistently supporting the EITI over the past few years. We are grateful to have cooperated in transforming information into practice.” President of the Mongolian National Mining Association N.Algaa said, “Launching the integrated electronic information database is a great advance. However, consumers do have their own needs and demands. If we could provide information to target groups, that would be better.”
SHARE
Share on Facebook
Tweet on Twitter
Previous article Assessment of gender equality in the artisanal and small-scale mining sector
Next article The Opportunity to Join the Tomujin team has become available!