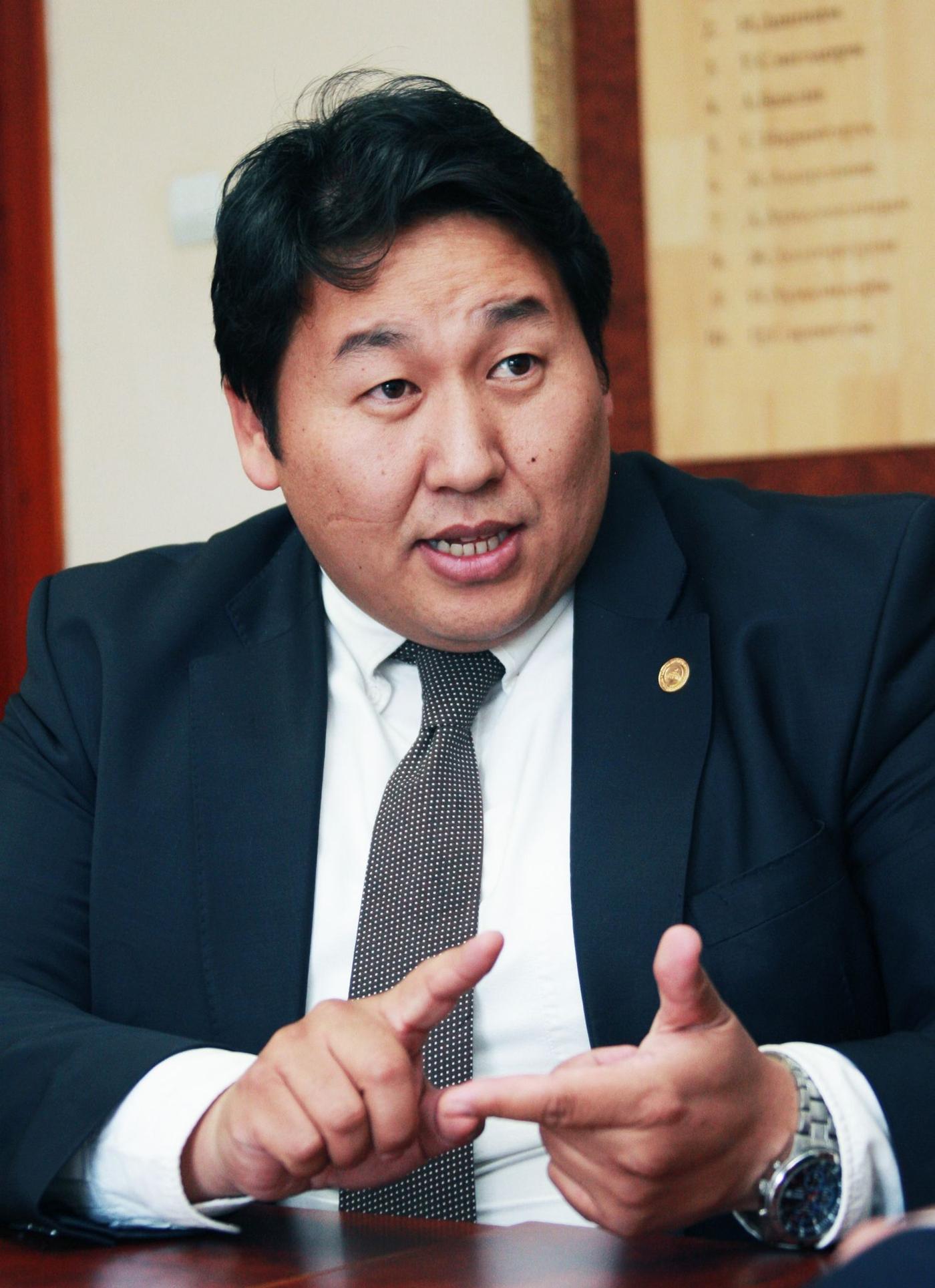 The following is an interview with Associate Professor of the School of Law, National University of Mongolia Dr. A.Byambajargal.

President Kh.Battulga initiated a parliamentary resolution on special measures to overcome the impoverishment and social and economic difficulties caused by the coronavirus pandemic to implement policy and measures to provide a 1 million MNT stimulus to all families. You believe that the draft resolution violates the Constitution.

As a citizen, I am grateful for the president to take the initiative to protect the country and people during the pandemic. But after a while, the pandemic will probably be behind us. But in order to resolve this problem, we must not create the wrong standards of the Constitution and distortions in the distribution of power. In accordance with the Constitution, the president has only the right to initiate legislation.

What is the difference between a law and a parliamentary resolution?

There is a fundamental difference. But in a unified sense, they are both legislation. In some ways, they can be used together, and used separately. The main difference is what kind of relations are regulated and what are the legal consequences in the future.

First, it is considered that the president violated the Constitution because he did not submit a bill, but submitted the resolution alone. The Constitution, the Law on President and Act of Parliament state that the president only has the right to initiate legislation. However, it is a different matter if a draft parliamentary resolution is initiated, implemented or accompanied by a law in accordance with this constitutional right.

Third, in accordance with the Constitution and the Law on President, the president has the right to address Parliament and the people, to participate in the session freely, and to report and comment on important issues of the country's internal and external situation. In the past, presidents have exercised this right by directing the government, making joint decisions, and signing them together. The process of canceling pension-backed loans was done in exactly the same way.

Fourth, within the framework of the 2019 amendments to the Constitution, it was considered to limit a president's right to initiate laws. Accordingly, the Act of Parliament sets limits on the powers of the 76 lawmakers, the government and president, respectively.

In which areas and issues should a president not initiate legislation on?

The right to initiate a decision to give a 1 million MNT voucher to all families belongs to the government. Article 38.3 of the Act of Parliament stipulates that only the government shall initiate bills and other decisions of Parliament on fiscal framework statements, state budget, its execution, development policy and planning documents, as well as public finance policy issues, such as property and taxes. It deprives the president of the right to initiate legislation on this issue. The reason is very simple. It is the constitutional principle that the executive branch should not be divided.

In 2019, the Constitution was amended to limit the scope of the president's executive and judicial powers in order to streamline the control and balance of power. Subsequently, Parliament made the president an institution that guarantees the unity of all the people of Mongolia. This means that executive power will not be taken away from the government.

The institution of the presidency has changed significantly in principle since the 1992 version (at which time the prime minister was appointed by Parliamentary majority in consultation with the president) after the 2000 and 2019 amendments
to the Constitution. One of the main changes is a constitutional restriction on the powers of the president. In the past, presidents have initiated, enshrined, and expanded many of their unconstitutional powers. According to last year's survey,
about 40 laws added non-constitutional powers. There are several reasons for this. The primary reason is that party leaders try to maintain their political power by becoming president and then by gaining legitimate authority. The second is the tendency to see the president as head of state or, on the one hand, supreme leader. And the main card to retain these powers has been the judiciary. In other words, the president has been influencing the judiciary. Past presidents have followed this path. Therefore, the 2019 amendments to the Constitution have taken a real step to limit the powers of president within the framework of the Constitution in order to ensure the control and balance of power.

Let me give you just one example to explain the situation. It is right that the people demand the discipline and accountability of judges. In the previous Law on Courts, there was the Judicial Ethics Committee. All members and chair of this organization are appointed by the president. However, in the last year-and-a-half, the committee has not been able to convene, because the president did not appoint members and chair. In addition, two members of the Judicial General Council have been out of office for more than a year. The president also did not appoint replacements. The president does not appoint the nominee. The chief justice of the Supreme Court has been replaced twice in a single year. Under the previous judicial law, the independence of the judiciary simply remained on paper and became too dependent on the institution of the presidency. Furthermore, the prosecutor and the Independent Authority Against Corruption were made entirely dependent on the president, Parliament, and prime minister. In other words, we have seen the basic principles of the Constitution become a political tool through direct empowering an unconstitutional body called the National Security Council, creating a serious conflict of power.

This time, I hope that the Law on Courts was amended to put an end to these unconstitutional issues and create a legal opportunity for the judiciary to operate independently. There is an arrangement to find and hold judges accountable, with equal representation in the judiciary and minimal dependence on politicians. In addition, there are regulations to ensure the internal independence of the judiciary.

This year, for the first time, the president will be elected for six years. What will be the result?

In the past, the average term of office of the government of Mongolia has been about 1.8 years. Only two governments served their full term when P.Jasrai and N.Enkhbayar served as prime minister for four years. One reason for this is that the president has split the executive branch and then disbanded the government by joining a minority or a group within the majority. However, there will be another political environment for the government to be stable. In 12 years, the parliamentary election will be held in 2032 and the presidential election in 2033, and the frequency will be the same as today. After that, the time between the two elections will be regularized gradually. In the long run, this will be a real legal incentive for a political party that won the majority in elections to exercise its executive power and to be able to formulate its policies.

It is also important to remember that the 1992 Constitution states that the president is a position appointed by Parliament. In this sense, it is wrong to demand the president to exercise executive power. Amendments to the Constitution in 2019 were made within this framework.

In connection with the upcoming presidential election, there are different views on whether the current president has the right to run for re-election. Does Kh.Battulga have the right to run in the 2021 election?

I cannot say much about that. However, the answer lies in the Constitution and the Law on Procedures for Enforcing Amendments to the Constitution. In accordance with the amendment, one provision on re-electing the president was repealed. I mentioned the principle that it is prohibited unless it is allowed by the Constitution.

You are a researcher who has participated in all stages of the discussion of the draft amendments to the Constitution. How satisfied are you with this amendment? Could you briefly summarize this process that has been going on for the last two or three years?

There are about 40 laws to be amended in accordance with the 2019 amendments to the Constitution. This is a huge job. In particular, the Law on Administrative and Territorial Units and Their Management was recently adopted. In accordance with this law, there are conditions to make major or minor amendments to about 300 existing laws. Maybe the next government will not complete it on time. Parliament is required to work without the right to rest. We have begun to update our basic social laws. On the one hand, this legal reform is a matter of deciding the fate of Mongolia for at least the next 30 years. However, in addition to passing laws, it may be even more difficult to implement them in the right way. Therefore, the Ministry of Justice and Legal Affairs is developing the Legal Reform-2 program. We need to spend a lot of time to address
the problem completely and to carry out legal reforms in accordance with the meaning of the constitutional amendment.

As a member of the working group in charge of preparation of the revised Law on Administrative and Territorial Units and Their Management, what changes do you expect from this law?

First, this law will be the beginning of further administrative reform in Mongolia. Second, the law does not provide for local development, but for local governments to have real power to resolve their own problems.

Third, local governments have the opportunity to develop through the implementation of property management and tax rates within the limits set by law. But this does not mean that we are a federal state. The law is written in such a way to ensure the principle of a unified Mongolia.

The most difficult thing is to implement this law properly. The law will come into force on January 1, 2022. The government needs to take the initiative and work diligently to lay the groundwork for the implementation of this law.

First of all, the implementation of the law will need to radically change the current “traditional” approach. The government and ministries need to get rid of the current centralization of governance and adopt new approaches and methods in implementing the Constitution and the Law on Administrative and Territorial Units and Their Management.