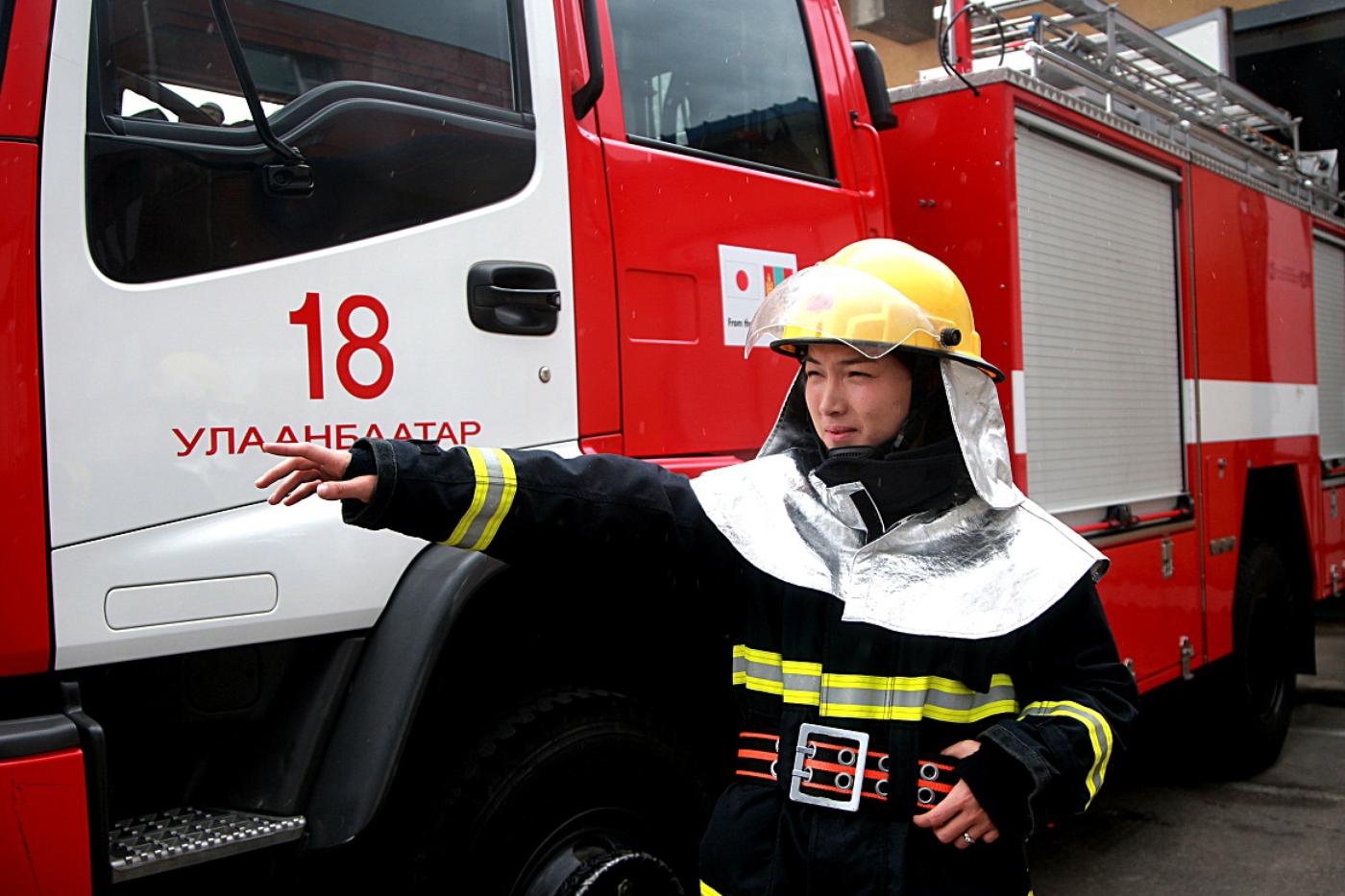 "A man asked me for a photo as his home burned”

Firefighting isn’t an occupation for everyone as it takes tremendous amount of bravery to plunge into scorching fire to save another person every time. In addition to being life-threatening, it requires rescuers to undergo intensive training on a regular basis and be on call at all times. A firefighter’s role overlaps with the roles of the police and emergency medical services as they investigate the cause of fire and provide some degree of emergency medical service.

Lieutenant B.Uuriintuya isn’t an ordinary firefighter. She’s one of the rare few female firefighters to ascend to the position of a battalion chief in the fire department. This 24-year-old currently serves as the battalion chief at the Fire Brigade and Rescue Unit No. 18 of the Ulaanbaatar Emergency Department. Here is an extensive interview with B.Uuriintuya who risks her life for others.

Firefighting is a dangerous job that scares away many men. What led you to become a firefighter?

In 2009, my grandfather went on a vacation with his colleagues on International Day of the Elderly (October 1) but didn’t come home for much longer than expected. And so, we searched for him at the vacation site for seven to eight days. We found out that he’d drowned but still couldn’t find him. Then, we called the National Emergency Management Agency and they found his body within a day. This is when I decided to become someone who rescues people. For some reason, I didn’t and still don’t think this job is hard.

A year after working in this sector, I realized that even a woman can be a firefighter. My father is a border soldier. I knew that I wanted to work in this line of work ever since I was a kid and started going around military bases with my father. After losing my grandfather, I became resolute on becoming a rescuer/ firefighter.

Rescuing someone who fell in water and rescuing someone in fire are different. Apparently you used to be scared of water. Is that why you didn’t become a water rescuer?

I used to be really scared of water when I was younger. I fought against my fears and slowly learned to swim. As I’m in the fire brigade, I only respond to fire calls. However, the search and rescue team saves people who are drowning or have drowned. Both rescue people’s lives and protect property. If there’s a person drowning, I will dive into the water to save them even though I’m not the best swimmer.

You’re the youngest in your family. How did your family react when you told them you wanted to become a firefighter?

They opposed it at first. Firefighting is the third most dangerous occupation. At the site of a fire, you could get injured, suffer from carbon monoxide poisoning, get crushed by a construction collapse or even die. But since I’m with a great team, I don’t get scared.
I was assigned to this team with the most skilled and capable people. As it was my wish, I fought my way to become a firefighter. I can’t imagine myself doing anything else. I’m happy doing what I wanted most.

Can you tell us about your first fire call?

I graduated from the Law Enforcement University in 2018 and was immediately assigned to the Fire Brigade and Rescue Unit No. 18 of the Ulaanbaatar Emergency Department. I started my work on July 16 last year and went on a mission that day. My first firefighting experience was rather large scale. A fire had broken out in the foam factory next to Makh Market Company. I was terrified after getting the call but nevertheless, our experienced firefighters put out the fire quickly.
Luckily, nobody was at the factory as the fire ignited after work hours. That was the first time I came face to face with an actual fire. Back then, I wore my fire protective mask and tried to go into the fire but older rescuers told me it was best that I stayed outside (because I was a rookie). I’m grateful to my superiors who always teach, advise, guide and help me. Since then, there wasn’t any major fire cases in our jurisdiction.

How much damage was prevented at the foam factory thanks to your team?

As it was a large factory, our team prevented damages amounting to over 200 million MNT. Besides our team, two other teams came as backup. We’re required to move out from the brigade in under a minute after receiving a call. We managed to do that but got delayed due to traffic and wrong address.
Our jurisdiction covers large factories, the first and second thermal power plants, and ger areas. It’s relatively calm during summer but in winter, we get many reports as people tend to dump ashes in open spaces and electrical wires are easier to break or have problems in the cold. It’s really nice when we hardly have any calls because it means that at least one family or one factory is safe and peaceful.

How many missions did you go on since starting work?

Our station doesn’t get as many calls as those in charge of other jurisdiction. Since the beginning of this year, we received 84 calls to date and the battalion I’m in charge of worked on 20 to 30 of them. Since we’re the first battalion, we’re the frontrunners for everything. Most of the reports we get are of fires that were started by children who were left alone and tried to use the stove or heater. Another common cause of fire is forgetting to pull out plugs before leaving the home.
I hardly get to go into fire as I’m the battalion chief, but I do if it’s necessary. My main role is to check fire protective clothes and equipment firefighters use and give instructions during fire.

What kind of requirements do people have to meet to become a firefighter and battalion chief?

I enrolled into the School of Non-Commissioned Officers of the Law Enforcement University in 2013. To get accepted into this school, you have to take an academic exam and then pass a physical fitness test. The physical fitness test includes running, athletics and strength tests. For example, you have to lift a 16-kilogram barbell, run 100 meter, one kilometer and three kilometers, do sit ups, do push-ups and do all of this in at least 66 repetitions. You have to pass this type of tests to enroll and graduate the Law Enforcement University.

The uniform and equipment firefighters have look very heavy. Do you have trouble carrying them?

When I was in university, I used to think it would be hard while watching my seniors carry fire hoses. In fact, women are as strong as men and very tolerant. The Emergency Management School has a course on fire technical rescue. You say that it’s a form of sport. If you attend this course for two years, you learn various attach techniques which you can use to participate in all kinds of competitions and tournaments. Now, I don’t find physical work hard. It’s true that the clothes are big and bulky and the equipment is heavy. The smallest shoe size we have, for example, is size 39 (equivalent to 8.5 in US size and 6.5 in UK size). I wear size 36 (5.5 in US size and 3.5 in UK size). I wear three or four layers of socks before heading out on a mission.

Are all of the clothes, equipment and tools safe to use and meet international standards? Do you have any problem using them?

I heard that a long time ago, firefighters only receive a recue belt, a helmet and a pair of boots. Now, we have uniforms made with nanotechnology that can protect us in up to 800 degrees Celsius for 16 seconds. Our battalion has sufficient uniforms and equipment.

How do people react when they see a female firefighter on duty?

As the uniform is quite impressive many people are very respectful. There even was a man who asked to take a photo with me while his home was burning. Some people get surprised to see me get out of the fire truck. I like that people notice me and take interest in me.
You get this exhilarating feeling every time you’re able to extinguish a fire before it gets out of hand. It’s always nice to hear people say “thank you”. On the contrary, there are times when I see people wailing as they watch their home burn and just want to cry with them but a firefighter has to manage and control her emotions. Those times are hardest.

Are there any other female battalion chiefs besides you?

Last year, 11 women graduated as battalion chiefs with me. There are five women in Ulaanbaatar and six outside of the capital who work as battalion chief. I was assigned to this position from the start but other women started off as assistants to battalion chief. My friends are being promoted to chief this year. Battalion chiefs are responsible for managing personnel for the fire stations under their command, make sure there’s enough people on duty and ensure their safety.

What do you do when there isn’t any fire report?

We have a 24-hour schedule. Shifts begin at 8:00 a.m. and our staff train every day and take care of their equipment. Everyone reports in at night and in the morning, and we run.

What are the advantages of being a firefighter?

It’s a job you can be proud of. We aim to rescue and protect. It’s reputable and it’s nice to help people. The police are obliged to prevent crimes and enforce the law but we try to rescue people and work when a dangerous situation has already occurred. Albeit risky, it’s something I’m obliged to do so I have no complaints.

Lastly, what’s your next goal?

I want to raise the reputation of emergency workers and my father who’s a border soldier. Whilst gaining more experience in this sector, I want to train to become a better firefighter and leader. I will do my best until the end. Apart from being physically fit and strong, it’s important for a firefighter to be able to neglect and risk themselves to save others.
We need to take preventive measures for potential disasters and accidents and pay attention to protecting the environment -- not just care about people’s welfare and property damage.
I’d like to take this opportunity to wish a happy 15th anniversary of the establishment of the emergency department in Mongolia to everyone who work in this field.