Mongolia and Korea to expand aviation and economic cooperation 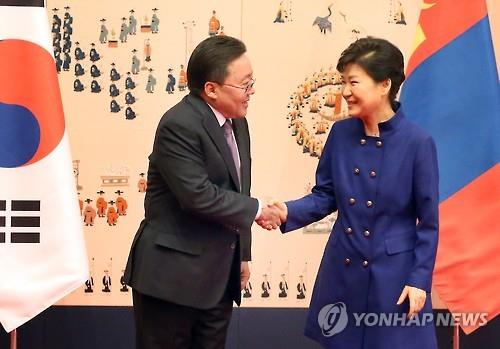 The Presidents of Mongolia and Korea agreed yesterday to increase flights between the two nations and expand cooperation in infrastructure construction and overall economic development. President Ts.Elbegdorj is on currently on a state visit to the Republic of Korea at the invitation of President Park Geun-hye. The counterparts signed three memorandums of understanding (MOUs) on strengthening bilateral economic cooperation and an MOU on cooperation in the sports sector. One of the MOUs signed concerns joint efforts to actively discuss ways to increase the number of flights between the two nations.  According to Yonhap News Agency, there are currently 12 weekly passenger flights between Korea's western port city of Incheon and Ulaanbaatar, despite a recent increase in the number of passengers. Last year, nearly 190,000 people traveled between the two cities. Under another MOU, the two sides will seek to bolster cooperation in Mongolia's urban development projects. Seoul officials explained that the MOU will help Korea export its "Smart City" model to Mongolia. The two countries also signed an MOU to enhance cooperation in the quarantine process for Mongolia's livestock products. Yonhap reports that Korea has been struggling to cope with illicit livestock imports from Mongolia, which could pose health risks. To expand Korea's support for Mongolia's development projects, an MOU was also signed to enhance cooperation in energy, education, urban development, environment, and public administration reform. As part of his state visit, President Ts.Elbegdorj met with the Mayor of Seoul, Park Won-soon. Recalling his meeting with the President in Ulaanbaatar and at the World Economic Forum in Davos, Mayor Park acknowledged Ts.Elbegdorj’s achievements and success in spreading democracy and protecting human rights, and highlighted Mongolia’s peaceful democratic development. “We are paying close attention to addressing the social issues of Mongolians who are residing and studying in Seoul. The city administration of Seoul has opened the Dongdaemun Global Center,  offering consultations on legal, labor, and immigration issues. “Moreover, there is a need to pay more attention to increasing the capacity of schools for Mongolian children in Seoul. We are searching for new opportunities to educate Mongolian students in the trade sphere and letting them practice in Seoul. We believe that mutual cooperation between Ulaanbaatar and Seoul will further expand,” said Park Won-soon. President Ts.Elbegdorj said he appreciated the Mayor paying attention to the social issues of Mongolian's residing in Seoul. He said, “There are many Mongolians who are working and studying in the Republic of Korea. Therefore, we would like to ask you to support opening the Mongolian Weekend School in Seoul, where the children of Mongolian residents will be able to study Mongolian language, culture, and traditions.” He added that as the President of Mongolia, he will pay attention to and support strengthening bilateral relations and cooperation between Ulaanbaatar and Seoul.
SHARE
Share on Facebook
Tweet on Twitter
Previous article President responds to Constitutional Court letter
Next article Justice ministry to cooperate with NHRCM to monitor human rights