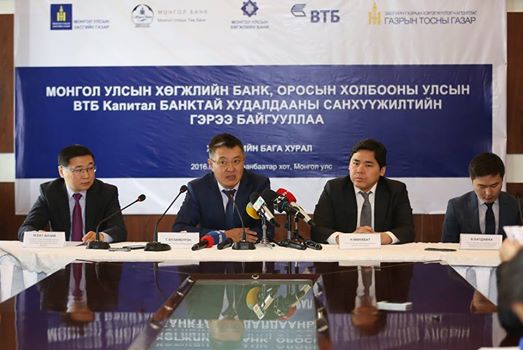 On April 18, Development Bank of Mongolia signed a trade financing agreement for 300 million USD with Russia’s VTB Bank to ensure financing for domestic oil importers and to prevent foreign currency exchange rate fluctuations. Mongolia is taking out the loan for a three-year term with a 7.6 percent annual interest rate, and the money will be spent on creating sustainable financing for domestic importers of oil and oil products from Russia. Mongolia and Russia agreed to draw in the financing partially in accordance with the nation’s oil import volume. Director of Development Bank N.Munkhbat said, “Mongolia’s oil product import hasn’t been utilizing a modern, sophisticated trading system until now. Oil importers purchase oil from Russia through their own funding. They have been paying in full to buy oil products. Now the situation has changed and oil importers can pay after a set period of time. If Mongolia fully uses its foreign trade lines, its turnover could reach nearly 1.4 million USD. This agreement will also have a positive influence on the flow of foreign currency.” Studies have shown that oil import makes up around 25 percent of the nation’s total import volume. Mongolia’s spending on oil import equals 1.4 billion USD, but in recent years, the country has been spending 700 to 800 million USD for fuel purchases. Officials underlined that oil procurement has been carried out with 18 to 22 percent annual interest rate loans, but now interest has decreased to a single digit.
SHARE
Share on Facebook
Tweet on Twitter
Previous article Assessment of gender equality in the artisanal and small-scale mining sector
Next article The Opportunity to Join the Tomujin team has become available!