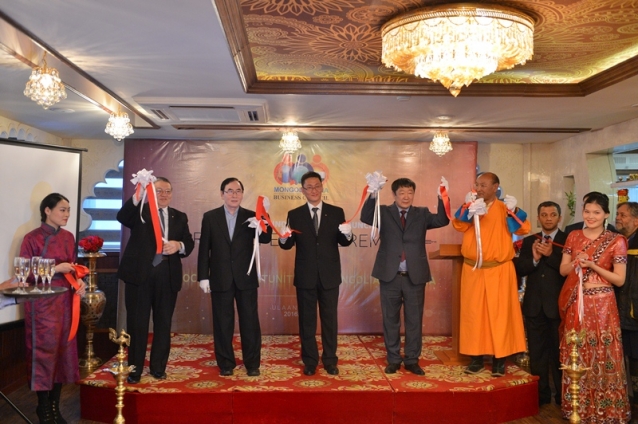 Last Friday, Mongolia India Business Council (MIBC) was established to support the businesses of the two countries and help in expanding their cooperation. At the opening ceremony of the council, President of the MIBC B.Gantulga said that Mongolia has been importing only religious items and souvenirs from India. He noted that some of India's biggest companies have expressed interest in investing in Mongolia’s engineering infrastructure. He said, “During his state visit to Mongolia paid last year, Indian Prime Minister Narendra Modi said that India will consistently support Mongolia in every sector. In order to develop the trade and economic cooperation between the two countries, we are establishing the MIBC at the initiative of Indian entrepreneurs.” “In recent years, the electronics business is developing around the world. In addition to importing religious items and souvenirs, we are interested in cooperating to develop e-commerce between the two states. Any kind of business relationship develops based on mutual trust. That’s why our council will provide the two countries' businesses with real and current market information.” Honorary President of the MIBC O.Nyamdavaa pointed out that 95 years have passed since Mongolia and India established diplomatic relations. “During this time, political and cultural relations and cooperation of Mongolia and India have been intensively developing. First Prime Minister of India Jawaharlal Nehru consistently supported Mongolia in joining the UN. Last year, Prime Minister Modi paid his first official visit to Mongolia. The visit was crucial in taking the strategic cooperation of the two countries to a new level. Involving the private sectors of the two states is important in advancing economic cooperation between Mongolia and India. The MIBC will work toward providing support in this matter.” During the council’s opening ceremony, Mongolian representatives and Executive Director of the MIBC Surendra Kumar Bansal spoke about current economic cooperation between Mongolia and India. It was noted that even though trade turnover between the two countries has been reaching around 50 to 60 million USD per year, the volume has decreased since 2010. In 2014, trade turnover fell to 15 million USD, which the MIBC believes should be improved. Executive Director Bansal said that if Mongolian products are being sold abroad in countries like the U.S. and France, they can also be exported to India, highlighting that India is one of the biggest retail markets in the world. Bansal said that the council will conduct studies on which Mongolian brands can be introduced to the Indian market, and what kind of activities Indian businesses can carry out in Mongolia. He said that the council will present the results of their studies and provide Mongolian and Indian businesses with information about mutually beneficial business opportunities. Bansal underlined, “We could say that India is a country of farming. Farmers make up around 70 percent of the country’s population... We will study possibilities for introducing Indian farming experience and equipment to Mongolia.” “Mongolia can supply wool and cashmere products to India. The country can also supply food products, including meat and meat products, but processed as sausages. The world believes that Mongolian food products are organic and healthy. Not only in India, but in the region, there is a water shortage. That’s why we should also study the possibility of supplying pure water from Mongolia,” Bansal noted. He emphasized that Mongolian food products will meet India's quarantine standards, but that beef export will not be an option.
SHARE
Share on Facebook
Tweet on Twitter
Previous article Assessment of gender equality in the artisanal and small-scale mining sector
Next article The Opportunity to Join the Tomujin team has become available!