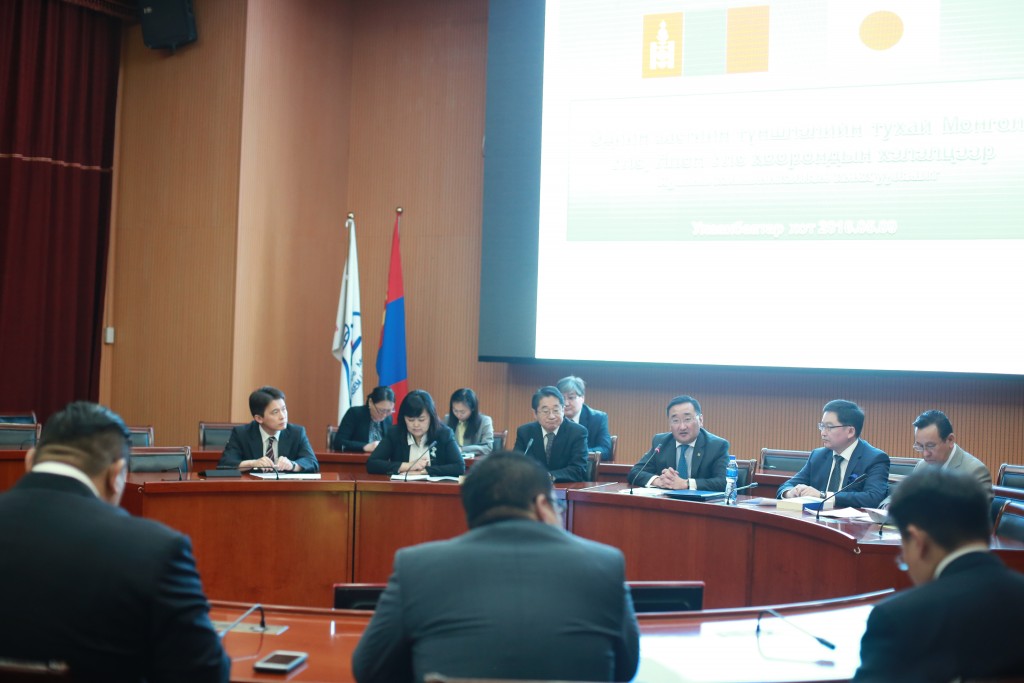 On Monday, Mongolian and Japanese government representatives held a meeting to discuss the economic partnership agreement (EPA) and provided information to businesses regarding the agreement. The representatives said that the EPA will become effective on June 7. At the meeting, Minister of Foreign Affairs L.Purevsuren said, “Yesterday (Monday), foreign ministries of Mongolia and Japan exchanged notes in relation to the launch of the EPA. The EPA will be effective within 30 days of signing the note.” Through the EPA, Mongolia and Japan agreed to directly or gradually lift 90 percent of import taxes within 10 years. In particular, Mongolia will decrease import tariffs on 5,700 goods in 97 categories, while Japan decreases tariffs on 9,300 goods in 97 categories. Ninety percent of Mongolian exports to Japan is cashmere, cashmere products, spar, and coking coal, while 70 percent of Mongolia's imported goods from Japan are vehicles and equipment. The annual trade turnover between the two countries stands at around 300 to 500 million USD, which makes up three to four percent of Mongolia’s total foreign trade. Mongolia and Japan expect trade turnover between the two countries to increase by 50 to 60 percent within two years of establishing the EPA. In the first stage, customs tax on 3,423 goods will be exempted starting June, while Japan exempts customs tariff on 8,004 goods. Officials explained this will provide more benefits to businesses that export to and import from Japan. For example, if an entity exports 100,000 USD worth of cashmere products, it pays 10 to 14 percent in customs taxes. After June 7, the company will no longer have to pay 10,000 to 14,000 USD in customs taxes. Local media also reported that taxes on imported cars from Japan that have been in use no longer than three years will be lowered by five percent, and taxes on leather products will be decreased by 24 percent. Head of the Economic Cooperation Department of the Ministry of Foreign Affairs A.Ariunaa said that a total of 17 sub-committees were created through the EPA. She said that the sub-committees will hold a joint meeting on June 7, and resolve EPA-related issues. A.Ariunaa said that Mongolia and Japan agreed on issuing one, three and five-year visas to businesses of the two countries. “Mongolians need to focus on meeting Japan’s quality requirements and receive certificates of origin,” she noted. During the meeting, officials and business representatives underlined that the EPA is a great opportunity for small and medium enterprises to expand their operations. Shimizu Takashi, Director of Sanko Group said: My father established our company 52 years ago. We are soon to celebrate our 64th anniversary. In 2005, we officially opened our branch in Mongolia, and currently three of our companies operate here. The EPA signed between Mongolia and Japan not only touches upon trade relations between the two countries, but also relates to relations between people. Collaboration between the two countries’ entrepreneurs is vital in implementing the EPA. Small and medium enterprises have advantages over biggest companies, because they can make decisions quickly and are flexible. I believe that Mongolia needs to support small and medium enterprises through policies. They will improve and grow once the interest rate for loans becomes more flexible, and Mongolia studies experiences of other countries. Head of the Mongolian Fruits and Berries Association D.Nasanjargal: This agreement is very beneficial for Mongolia. Mongolia negotiated to export heat-processed meat to Japan. Since 2010, Mongolia has been exporting sea buckthorn to Japan. We did approve standards of Mongolian sea buckthorn juice. We need advice from the Japanese side on sea buckthorn reserve, cluster, technology and packaging. Many Japanese companies are interested in importing sea buckthorn from Mongolia. That’s why we should increase sea buckthorn reserves and export final products to the Japanese market. President of Royal Plaza D.Dagvadorj: I see that the EPA will benefit Mongolians more. It’s important for Mongolia to focus on products that will be profitable for long periods of time. If we export high-quality products, we won’t be limited only by the Japanese market, but we will be able to export domestic products to China and Southeast Asia, improving the nation’s economic situation. There is a place in Mongolia that has a similar climate to Japanese Hokkaido. Our company is aiming to cultivate rice. This year, we are planning to plant on 2,400 hectares of land. We are also conducting laboratory analysis to produce beauty product with placenta. However, we have problems with transportation. We are going to export our products from Dornod, through Russia, to Japan. Even though we are wasting time, there is no business without risk. But the issue of transportation needs to be resolved. Director of ESSI International LLC B.Soronzonbold: Since 2008, our company has been producing peanut butter with the aim to export it to European countries. Mongolia and Russia are capable of becoming large peanut butter producers. Mongolia has possibilities to make its peanut butter a global brand.
SHARE
Share on Facebook
Tweet on Twitter
Previous article Pandemic control and immunization coverage to determine speed of economic recovery
Next article World Bank: Stimulus program will drive economic recovery