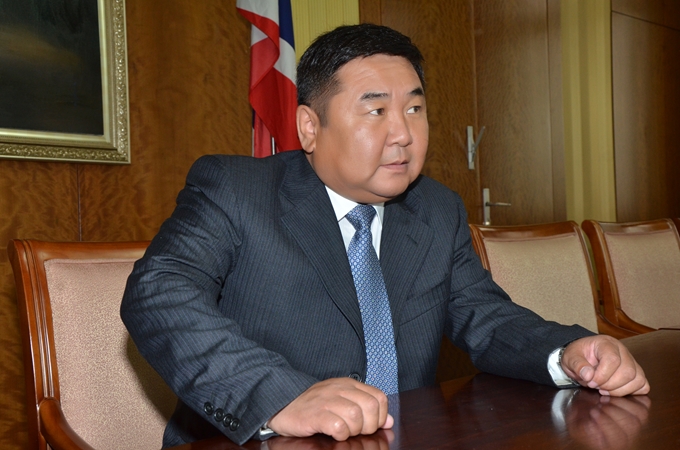 Parliament held a final discussion last Friday of bills on criminal procedures and law enforcement, as well as amendments to criminal legislation. Head of the Standing Committee on Legal Affairs MP D.Ganbat shares some important content in these legislations in the following interview.

Head of the Standing Committee on Legal Affairs MP D.Ganbat[/caption] What are the main changes being made to the Law on Criminal Procedures? The Criminal Code of Mongolia was revised in 2015. The Law on Criminal Procedures, on the other hand, specifies the process for applying the Criminal Code in real life. People in the legal sector call it the “Process Law”. The Process Law was first adopted in 1963 and amended in 2002. Now, it has been revised once more. In general, the previous Criminal Code prioritized Soviet-style methods, meaning that it was based on a legal environment that proves guilt or innocence through the confinement and interrogation of suspects. This type of legal environment imprisons a society. Moreover, victims aren’t able to claim compensation for damages and suffer even more. All of this will completely change on September 1, when the new, revised version comes into force. The amended law will create a legal environment that doesn’t elicit useful information through interrogation alone but through various means. In other words, it prohibits the confinement of people for many months based on an individual’s suspicions, and ensures that people accused of a crime are arrested only when reasonable evidence is found.

Mongolian law enforcement officials used weapons on July 1, 2008. It exposed the fact that the use of weaponry wasn’t regulated and many started to debate on the topic. The inadequacy of law enforcement activities was shown through the deaths of five people.

Does this mean detectives cannot forcefully detain and interrogate people? That’s right. Detectives and investigators will actually start to work in a different environment. This means that field activity will increase. Only methods permitted by the law can be used. The state will be responsible for restoring violated rights of victims. We must approve a law on a compensation fund for damages so that victims can claim compensation and reimbursement. This way, compensation will not be given directly from convicts but from the fund. Afterwards, the amount will be retrieved from the convict. There are 6,000 to 10,000 people imprisoned in Mongolia. This is a high figure compared to the total population. Yet, the Amnesty Law is passed every four to five years, demonstrating the fact that Mongolia’s legislations were no good. Before there were four or five crime categories, including light, less serious, serious, and exceptionally serious crimes. The revised law separates crimes into two categories. Following the adoption of the revised Law on Criminal Procedures, Parliament will discuss a bill on Court Decision Enforcement, aimed to improve the protection of human rights at detention centers. Parliament passed the Law on Law Enforcement, which is completely new to Mongolia. Can you briefly talk about the law? In 2015, the Criminal Code was revised and a completely new law, Law on Conflicts, was passed. The Law on Law Enforcement has 12 articles and will become effective on September 1. With aims to set public order, ensure public safety and security, combat crimes, and examine and resolve conflicts, the new law provides ground rules for law enforcement and creates conditions for protecting human rights and freedom. It legalizes basis of operations of organizations and workers in charge of setting public order and stopping demonstrations when a person illegally enters others’ property and premises, a quarantine regime is imposed during times of crisis and any other crimes. A special instrument for any type of legal enforcement operation, a special instrument that will influence on many people, and regulations for the use of weapon have been specified in the law. For instance, in the provision about weaponry, it states that environmental inspectors and rangers can use weapons or truncheon if two of 11 legal grounds in the law is met. The public was speculative about the competence of authorities that manage the use of weapons under joint or internal regulations. But now, all organizations permitted to use weaponry will follow a single law, right? Yes. In the past, Mongolian law enforcement officials used weapons on July 1, 2008. It exposed the fact that the use of weaponry wasn’t regulated and many started to debate on the topic. The inadequacy of law enforcement activities was shown through the deaths of five people. Many police officers were wound up in trouble. All of this has now been specified in the law. In addition, the law specified the types of surveillance and control devices to be used for law enforcement activities, their requirements and regulation on the use of these devices (yet to be approved by the cabinet), and enabled voice recordings and videos to be used for resolving cases and conflicts.

By putting the Law on Law Enforcement into force, law enforcement agencies will get the right to infiltrate homes to stop domestic violence.

Are you saying that videos can be shown during court trials as evidence? If a voice recording or a video has been confiscated under special protection, it will be accounted as evidence. The law was amended so that the police takes immediate action to stop and prevent any criminal conduct that might harm people’s lives and health as soon as it has been reported. Combat and suppression of domestic violence has been specified in the law. There have been cases when serious injury to health have been inflicted among family members behind closed doors. Some victims of domestic violence died in some occasions. Law enforcement agencies hardly got involved in family affairs. By putting the Law on Law Enforcement into force, law enforcement agencies will get the right to infiltrate homes to stop domestic violence. Can you elaborate on that? Basically, it means that the law will enable police officers and investigators to open doors by any means to stop domestic violence occurring inside the home. Moreover, we have determined grounds and procedures of secret investigations conducted by the Independent Agency Against Corruption, the Police, investigators, agencies that enforce court decisions, and the General Takhar Office to ensure public order, find intelligence about crimes, and prevent crimes. A regulation on state prosecutors’ surveillance range and on activities of law enforcement agencies has also been approved. The Law on Conflicts will become effective on September 1, 2016 as well. Measures to examine and settle violations has been included in the Law on Law Enforcement within the framework for determining quick, effective and appropriate procedures for the Conflict Law’s implementation and transparency. In the past, examination and settlement of conflicts and violations used to be regulated through the legislations on customs, competition, banking, and administrative procedures. We’re starting to inspect individuals’ belongings and properties, confiscate document and possessions, and take samples for laboratory tests according to provisions approved for specific sectors. It is close to violating some articles in the Constitution about discrimination and equal rights as well as legislations specifying that inspection and law enforcement activities are to be conducted regardless of status and position. However, the Law on Law Enforcement creates a general standard for operations related to investigating and resolving violations. Private companies are towing vehicles parked on the first lanes of roads. Is it true that the police will supervise this operation when the Law on Law Enforcement takes effect? Only staff of organizations with the right to check ID, licenses and other documents can do these things or if they have special permits to check and inspect people. Not anyone can tow whatever they want. Companies and organizations can’t tow cars even if they received an order from the mayor or administration head. They must be affiliate to one of the groups specified by the law. In the future, only those with special rights to tow vehicles will be in charge of towing cars. Everything will go by the law. People will not be able to do as they wish with somebody else’s property. This includes towing vehicles.

The Law on Law Enforcement was amended so that the police takes immediate action to stop and prevent any criminal conduct that might harm people’s lives and health as soon as it has been reported.

Open letters from heads of the Independent Agency Against Corruption, General Police Department and the General Intelligence Agency were publicized during the discussions of the two bills. The letters stated that the power of these bodies would weaken and that the number of solved crime cases would decrease if the bills are passed. Can you comment on this? As the head of the working group in charge of these bills, I met with the heads of the Independent Agency Against Corruption, General Police Department and General Intelligence Agency, as well as the Minister of Justice. The issue was resolved by omitting some provisions in the bills that could be removed without causing major damage to the main principle and concept of the legislations. We considered the best options for both sides. Urgent measures will be taken for things that can’t be delayed, but it should be conducted under some extent of supervision and permission. The three heads did raise some important facts that needed to be considered.
SHARE
Share on Facebook
Tweet on Twitter
Previous article Smartphone addiction harms children’s mental health
Next article The EU-funded ‘Sustainable Plastic Recycling in Mongolia’ project is helping to improve waste management in Mongolia