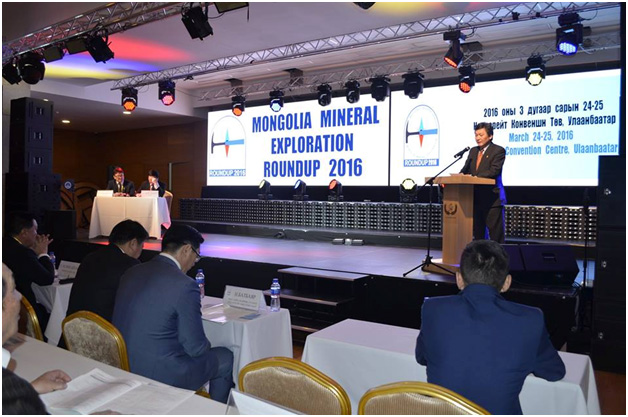 The Mining Ministry, Mongolian Society of Economic Geologists, and professional associations organized the eighth Mongolia Mineral Exploration Roundup 2016 from March 24 to 26, at Corporate Convention Center. Mining Minister R.Jigjid presented the opening remarks at the forum, underlining that since the government started issuing exploration licenses, activities of the nation’s geological and exploration sectors are intensifying, having a positive influence on drawing in foreign and domestic investment, strengthening the sector’s future development, and improving its competitiveness. He said that the issuance of new exploration licenses is also important to infrastructure, the creation of new jobs, and increasing the population in rural regions. Beginning the forum, a discussion on special exploration licenses was held. Entities engaged in geological and exploration activities asked state officials about when application numbers for exploration licenses will be issued through petitions, and when it would be possible to submit exploration plans online. Officials from the Mineral Resources Authority (MRA) said that the MRA has great workload, and acknowledged that companies are interested in submitting their plans online. They said that the MRA is cooperating with Germany to create an integrated system for reviewing operational plans for exploration. Government representatives said they are working toward accurately studying the nation’s geological features, finding mineral resource deposits, and improving the scope of regional geological studies. During the three-day meeting, geologists underlined that the falling prices for raw materials and the economic slowdown has impacted exploration projects. The Geological Department of the MRA noted that the private sector invested around 300 billion MNT for conducting exploration last year. Even though Parliament approved 11.3 billion MNT in funding for the geological sector in 2016, due to difficult economic conditions, the budget was cut to 9.3 billion MNT. Minister Jigjid emphasized that even though the prices for mineral products have been falling in the global market, over 250 mining companies carried out activities in 2015, making up 16.1 percent of GDP, 67.2 percent of industrial products, and 78.8 percent of export revenue. R.Jigjid also announced that the Mining Ministry started negotiations with Centerra Gold, which owns the exploration license for the Gatsuurt deposit, and Areva, which owns special exploration licenses for uranium deposits in Zuuvch Ovoo and Dulaan Uul, to establish deposit development and investment agreements.
SHARE
Share on Facebook
Tweet on Twitter
Previous article Advisory Board of German-Mongolian Business Association
Next article Foreign reserves and gold purchase shatter records in 2020