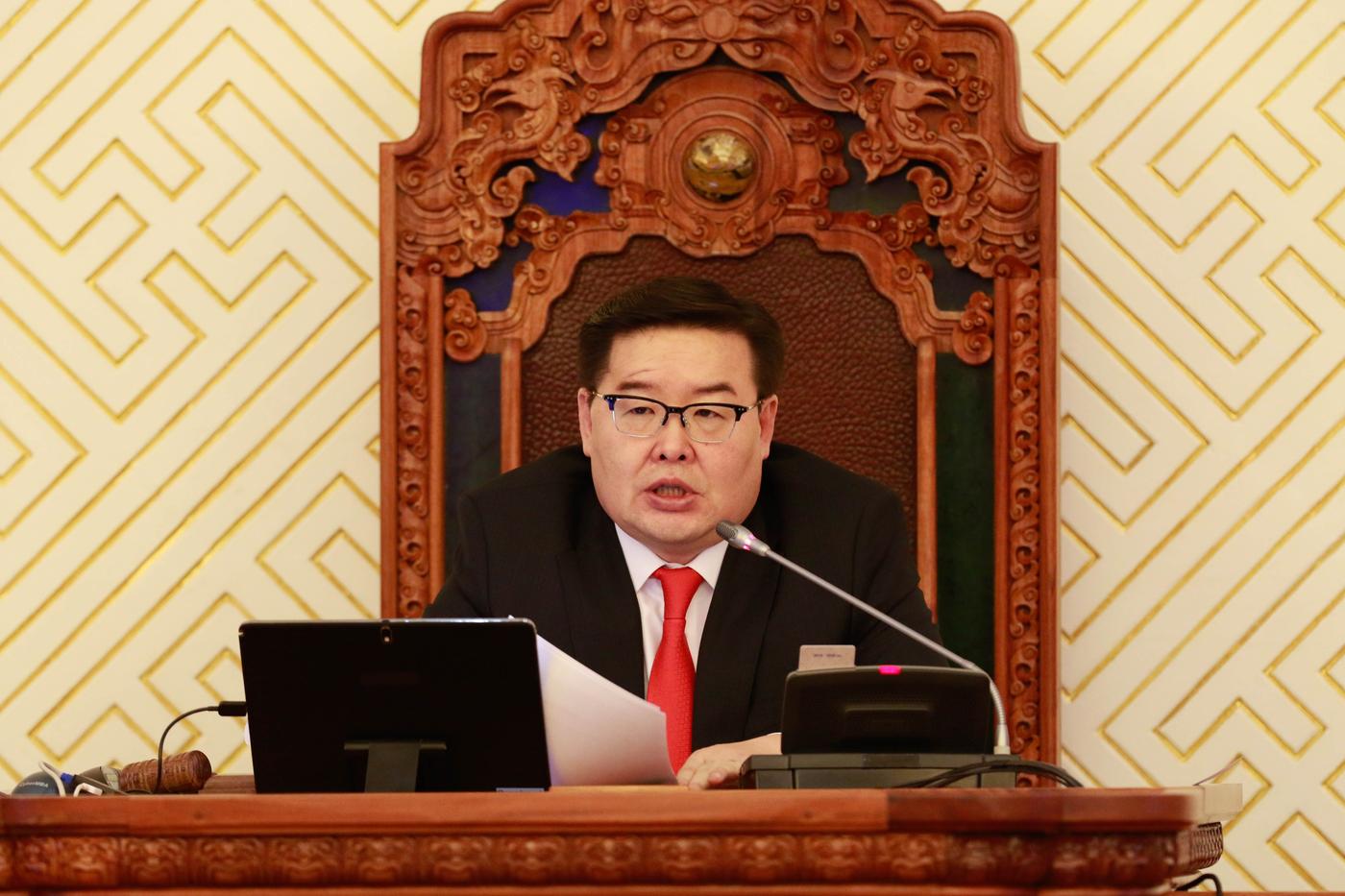 Spring session of Parliament will be held via video conference. Is the meeting prepared?

The spring session of Parliament will be held on time as planned. During the online meeting, we will hold open discussion on important issues and pass many new laws. Parliamentary activities have their own special feature. Activities such as attending meetings, registering attendance, holding discussions, and voting are all governed by special laws. The e-meetings must be organized properly, without hindrances and risks. Accordingly, technological and organizational issues were resolved in a short period of time and preparations were completed. According to risk and time conditions, the spring session of Parliament will be held in three modes: regular, partial and online.

In this regard, will the Act of Parliament be changed?

Yes. During the spring session of Parliament, we will discuss the amendments to the Act of Parliament. During the restriction period, how will Parliament members decide to register attendance, discussion, debate, and voting through online? What is the international experience? What about our country's situation? We will consider these kinds of issues during the meeting and new regulations will be added to the Act of Parliament. Countries around the world never held online Parliament sessions before the spread of COVID-19. In connection with the current situation, all countries are using e-meetings and conferences. As such, Mongolians have never held e-meetings previously. A new step is about to be taken. There is no doubt that it will be successful.

What is Parliament doing to prevent COVID-19 infections and economic crisis?

Parliament has been working continuously and making related decisions. We have been working with medical supply organizations, food markets, the Mongolian National Chamber of Commerce and Industry, and other related organizations, and conducted research, calculations and reviewed the situation. The Standing Committee on Security and Standing Committee on Foreign Policy held a meeting and gave directions to the government.

Led by Parliament Member J.Ganbaatar, a task force of the Standing Committee on Economic Affairs and Budget, including over 10 members, has been working on exemptions for business entities and organizations, ensuring food supply stability, not reducing herders' incomes and supporting cashmere producers with purpose to expand the economy. We see their working results. The government improved the supply of food without disrupting it. Increased production and supply of masks and disinfectants are being monitored.

Led by Parliament Member D.Togtokhsuren, a task force has been working together with the government in the field of developing proposals, conclusions and plans to support the economy. Based on the recommendations of the working group, the government introduced measures to be taken.

Mongol Bank, Development Bank, Financial Regulatory Commission and other commercial banks discussed the regulation on reducing policy rates and extending loan terms. How is the implementation?

The task force has been working to monitor reduction of interest rates, extension of loan repayment, related discounts, banking transparency and governance of commercial banks, according to petitions and complaints from citizens.

Incidentally, according to citizens' comments and complaints, we created a task force to monitor and inspect human rights violations in the Ulaanbaatar Land Administration Department and law enforcement agencies, and their operation during the restriction period. The conclusions of the working group will be discussed by Parliament.

The world is saying that an economic recession is inevitable. Probably, our country will face a crisis. What measures should be taken to prevent this?

It is clear that the crisis will affect the world, and each country is taking action. But nobody knows how long the coronavirus will affect the world, how many people will get sick, and how many families will be affected. It is necessary to discuss and resolve the problem based on scientific calculations, facts and evidence, and not to kick up dust. International organizations are constantly changing their estimates.

In such uncertain circumstances, it is calculated and planned in three stages, according to the theory of crisis management. The newly established Parliamentary Research Institute conducted science-based research and calculations. Based on this, the main directions of policy and activities have been developed.

What are the three stages?

Crisis management theory looks at long-term, medium-term and short-term assessments, and conclusions on issues based on scientific research and evidence. Based on the results, determining and planning the course of action are considered in the three stages of risk.

For instance, the impact of the coronavirus crisis on the Mongolian economy and people's lives are estimated as follows.

First, what will the situation be like during the baseline scenario, which means if the current situation continues normally or improves?

Second, what will happen during a risk scenario, which means the effects are long lasting and risky?

Third, what will happen during the worst case scenario, which means the risk continues for a long time?

All around the world, countries are facing those three stages.

It is estimated that about 80 percent of the world's major economies will experience an economic crisis.

What will be the situation in our country?

We calculate by the above standard. During the first scenario, our GDP in 2020 is calculated to decrease by one percentage point from the previous year and become 4.1 percent. Large mining investments will continue, state budget spending will expand from the previous year, one-time debt repayment for seniors, household consumption will increase in connection with the government’s measures to boost economic growth.

In the second scenario, economic growth will decrease by 2.8 percentage points from the previous year to 2.3 percent. In the third scenario, there is a risk that it will reach only about one percent and possibly reach minus figures.

What should we do in such a difficult situation?

Moral and spiritual unity is very important during this period. In fact, the coronavirus crisis is sending shock waves in all directions around the world. Shock itself is looking for change. It demands moral progress and social unity. Both the government and the people have to try for this. In this situation, Mongolians can overcome difficulties together. Our citizens are able to fulfill their responsibilities and protect themselves, their families from dangerous viruses. The coronavirus outbreak is also changing the global order. We are in the same boat, no matter what country or nation it is. The air we breathe is the same. Our drinking water belongs to this planet where we live together. We live together on the same soil of the planet. Thus, it makes us realized that we are interconnected no matter the differences.

President of Mongolia Kh.Battulga proposed to cancel or postpone the elections. But Prime Minister U.Khurelsukh didn’t agree with the president. What do you think about it?

The issue needs to be resolved based on scientific calculations, research and evidence. I think it is right to consider it in three stages and relevant organizations are preparing A and B plans.

First, if the situation continues normally, the election will be held on time as required by law.

Second, if we face risky situations, special procedures should be established and organized.

For instance, South Korea was scheduled to hold parliamentary elections on April 15. However, the coronavirus is widespread in the country, so they didn’t change their schedule. Voters will stand three to five meters away from each other and they will be provided masks and hand sanitizers. Similarly, many countries are taking steps to postpone or not postpone scheduled elections. They are also carrying out research on online options.

Third, an option to postpone the election might be chosen during an emergency situation.

So what does the current situation look like in Mongolia?

Parliament and the General Election Commission have issued a report considering those three scenarios. It was concluded that there is no need to postpone the election as long as the virus does not spread among the population. However, decisions might be changed depending on the current situation. Parliament is ready to make decisions and organize in any situation. According to the law, parliamentary elections can be posponed only if a state of emergency is declared. Currently, we are in a state of high readiness to prevent viruses. High readiness is not a state emergency. Parliament has a right to declare emergency nationwide. In the end, it is up to Parliament to decide whether or not to postpone the election according to the law.

During the spring session of Parliament, new laws will be discussed. Can you briefly mention the main concepts of the laws?

According to the Act of Parliament, Parliament members have the right to pass laws. Previously, they had three major powers: legislature, to be appointed or appoint someone, and participate in budgeting and financing issues. The law cuts pParliament members’ right to appoint ministers. Some Parliament members used to appoint people who helped their election to higher positions. This will not be the case after the law changes. All chances to become all-powerful, coordinate tender selection, distribute fund assets, and receive benefits will end. Only the knowledge and experience will matter and decide if you can become a Parliament member or not. In addition, ethical criteria will be added.

In the Law on Political Parties, it is legislated that the head of the majority party will become prime minister. The people will have the opportunity to decide who will work fairly for us and for our country. And many other related laws will be decided.

Some lawyers say that the current government will need to resign when the new Constitution comes into effect on May 25. Is it true?

No. They need to learn before talking. People have to stop their serious politicization leading up to the elections. We have passed the Law on the Procedure for Complying with the Amendments to the Constitution. Everything is clear there. For example, the issue of amending the Law on Government will be decided during the spring session. When the law is approved, the deadline will be specified. This means that the amendments to the Constitution will start to be implemented from that day. Until that time, the previous law will be in effect. So, this needs to be understood before they start talking.