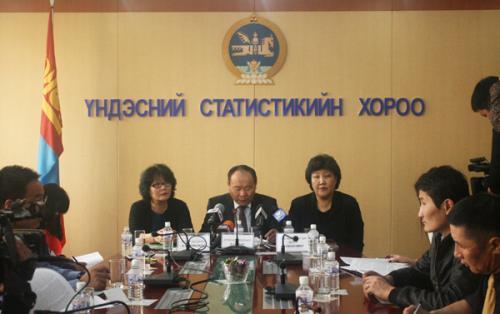 The National Registration and Statistical Office (NRSO) reported on social and economic conditions in April 2016, highlighting data concerning the nation’s employment and monthly average income. The NRSO reported that Mongolia’s total population has reached nearly 3.6 million, 1.9 million of which are employed. A total of 320,000 people are working in agriculture, 210,000 in the industrial sector, and 560,000 people work in the service sector. As of the first quarter of 2016, a total of 143,500 people were registered as unemployed, which is a result up by 55,000 people compared to the same period in 2015. The NRSO underlined that the number of unemployed is expected to increase in comparison to last year. There are around 33,400 people registered with employment agencies that are actively looking for jobs, 52 percent of which are women, and 49 percent of which are people with secondary education. The average monthly salary for Mongolians now equals 849,500 MNT, while average household expenditure equals 965,000 MNT. Around 14.4 percent of families have a monthly income of 300,000 MNT, and 17.8 percent have income ranging from 300,000 to 500,000 MNT. Families with incomes of more than 1.6 million MNT per month make up 9.3 percent of the population, which means that one out of every three families has a monthly income of up to 500,000 MNT, while one out of ten families earn 1.6 million MNT on average. As of the first quarter of 2016, Mongolia traded with 108 countries from all over the world and total external trade turnover reached 1.5 billion USD, 959 million USD of which was made up by exports and 599.1 million USD by imports, the NRSO reported.
SHARE
Share on Facebook
Tweet on Twitter
Previous article Pandemic control and immunization coverage to determine speed of economic recovery
Next article World Bank: Stimulus program will drive economic recovery