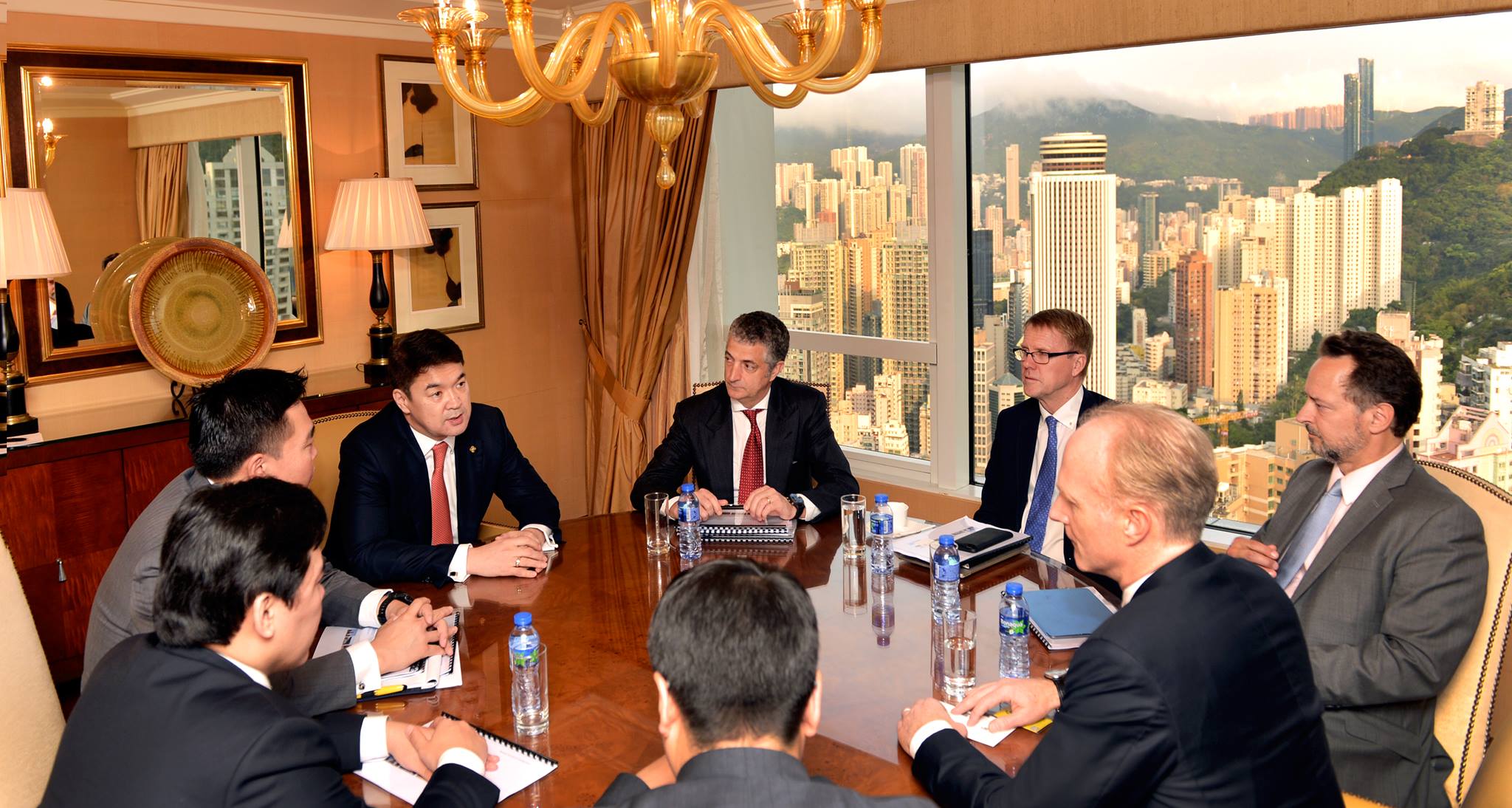 Official meetings and negotiations are continuing in Hong Kong for Prime Minister Ch.Saikhanbileg, who is attending the Asian Investment Conference (AIC) being organized from April 5 to 8. The Prime Minister attended the Investment Strategy Reform meeting organized during the AIC by Erdenes Mongol LLC. He was joined by State Secretary of the Finance Ministry Kh.Gantsogt, Executive Director of Development Bank of Mongolia N.Munkhbat, Executive Director of Erdenes Mongol B.Byambasaikhan, and the President in Charge of International Investment from the Canada Pension Plan Investment Board. During the meeting, the PM presented information on the nation’s current economic conditions, and talked about state policies in the mining and industrial sectors. He emphasized that the Government of Mongolia will work toward creating a more pleasant business environment for foreign investors. B.Byambasaikhan told investors that Erdenes Mongol is aiming to make strategic reform, strengthen the company’s investment management, and carry out the company’s operations in accordance with improved business principles. He underlined that the company is cooperating with Asian Development Bank to improve the management and investment capacity of its subsidiaries. The parties exchanged views on cooperation possibilities during the Investment Strategy Reform meeting. PM Ch.Saikhanbileg met with Executive Director of the Hong Kong Trade Development Council (HKTDC) Margaret Fong. The sides shared views on boosting trade and investment cooperation and relations between Mongolian and Hong Kong businesses. The PM said that Mongolia is interested in participating and partnering in meetings organized by the HKTDC. The sides discussed organizing an event to promote Mongolian brands in Hong Kong in 2017. The HKTDC promised to study their operational plans for 2017 and review the possibility of organizing the event. After the meeting with Fong, the PM was interviewed by CNN in Hong Kong. Afterwards, PM Ch.Saikhanbileg and representatives from the finance and foreign affairs ministries met with President of Asian Infrastructure Investment Bank (AIIB) Jin Liqun. During the meeting, the Prime Minister said that under Mongolia’s Taliin Zam, China’s Silk Road Economic Belt, and Russia’s Eurasian Economic Union projects the three countries decided to establish an economic corridor. The PM noted that Mongolia is working on a program for establishment of the economic corridor and expressed interest in resolving financing issues with the AIIB’s support. The AIIB expressed interest in implementing its first projects in Mongolia, and Jin added that if there are any infrastructure projects ready for investment he will study them. He emphasized that the AIIB is ready to resolve investments in a short period of time for mega projects important to Mongolia.
SHARE
Share on Facebook
Tweet on Twitter
Previous article Meet Biirchin - An Entrepreneur Running Two Successful Ventures in Food and Information Technology
Next article Sendly International Remittance Company prepares for IPO