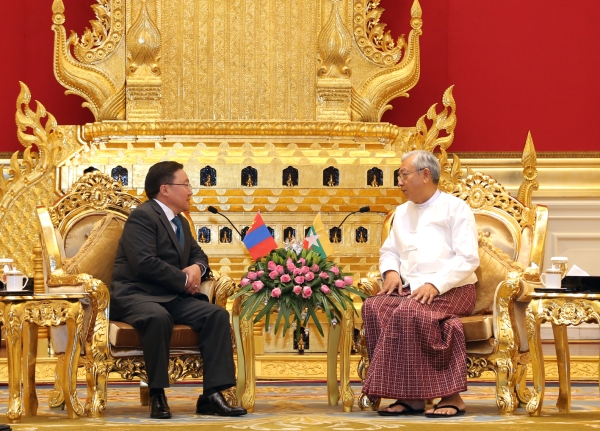 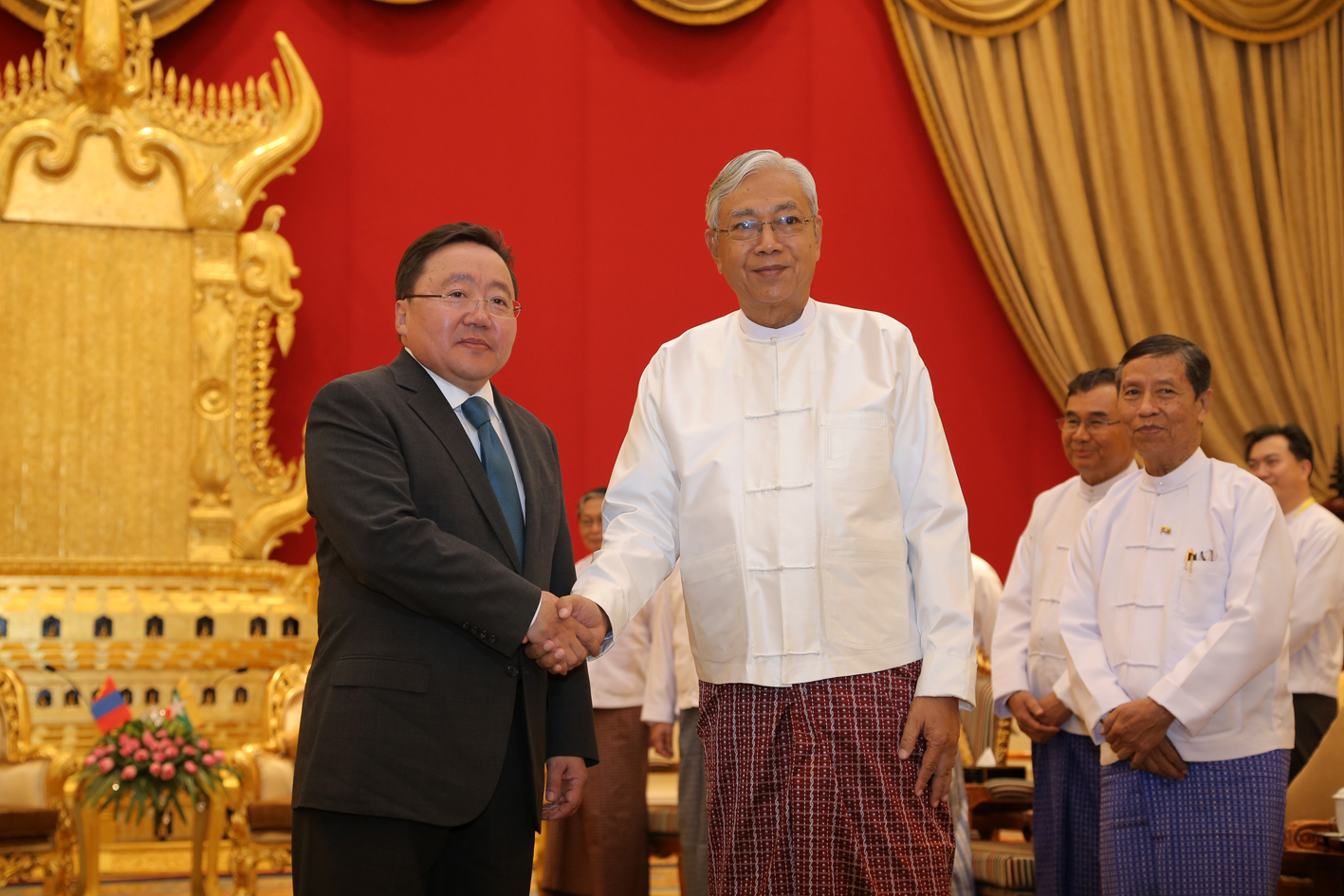 President of Mongolia Ts.Elbegdorj, who paid an official visit to Myanmar from June 14 to 16, met with his counterpart, Htin Kyaw, to hold official negotiations. Beginning the meeting, President Kyaw thanked the Mongolian delegation for visiting Myanmar during the 69th anniversary of diplomatic relations between the two countries. President Elbegdorj thanked his counterpart for the warm welcome. The Mongolian President noted that Mongolia and Myanmar have great opportunities to expand cooperation and relations in many sectors. Ts.Elbegdorj said that he was happy that the number of high-level meetings between the two countries is increasing, and underlined that as a result of good relations, citizens of the two nation’s are interested in exchanging experience and supporting one another. “In 1990, Mongolians chose democracy and a market economy. There is a big difference between discussing reforms and implementing them. We overcame many difficulties and want to share our experience with others,” said President Elbegdorj. In response, President Kyaw said that he is proud of Mongolians, who chose democracy and are now living with successes and achievements. “We are happy to exchange experiences in this field. We appreciate that Mongolia has good relations with its neighbors, the region, and other countries and international organizations, including the United Nations,” said President Kyaw. The Mongolian President said that citizens of the two countries are connected by religion, history and culture, and noted that Mongolia and Myanmar can cooperate in exchanging students between their schools of Buddhism. Ts.Elbegdorj underlined that Mongolia actively participates in international peace operations, and organizes multinational military exercises. He said that Mongolia will welcome representatives from Myanmar’s armed forces for joint training. At the end of the meeting, President Ts.Elbegdorj said that the two countries can develop economic, education, and tourism collaboration. He also noted that the Asia-Europe Meeting is going to take place in Ulaanbaatar soon, and that he hopes Myanmar will actively participate in the summit. Following their meeting, the sides took part in a ceremony for the signing of a memorandum of mutual understanding between the Ministry of Education, Culture and Science of Mongolia and the Ministry of Religious Affairs of Myanmar. President Elbegdorj also met with Minister of Foreign Affairs of Myanmar Aung San Suu Kyi to discuss cooperation and relations between the two countries. The Foreign Affairs Minister said, “We are happy that you are paying a visit to Myanmar in times when relations between our countries are intensifying. I am confident that your visit will greatly contribute to expanding and strengthening cooperation between the two countries.” During the President’s visit, the Mongolian delegation also took part in the Mongolia-Myanmar CEO Conference held on Wednesday. During the business meeting, President Ts.Elbegdorj said that cooperation and relations between Mongolia and Myanmar are expanding and said that he was happy that business partnership between the two countries’ entrepreneurs is intensively developing. The Mongolian President underlined the importance of expanding agricultural and industrial sector cooperation, and said that Mongolia and Myanmar can also cooperate in the tourism sector. President Elbegdorj also took part in the international Sound Management of Natural Resources 2 workshop, which touched upon vital issues about how to properly spend income from natural resources, and how to create good governance to equally distribute profits to citizens. During the Sound Management of Natural Resources 1 workshop, held in Ulaanbaatar in March, participants discussed mining sector development, challenges facing the mineral resources sector, and exchanged views and experience about their achievements. Yesterday, the Mongolian delegation held meetings with state servants, teachers, and students of Myanmar to promote and introduce Mongolia’s democracy, social situation, and experience in the mining and economic sectors.
SHARE
Share on Facebook
Tweet on Twitter
Previous article Smartphone addiction harms children’s mental health
Next article The EU-funded ‘Sustainable Plastic Recycling in Mongolia’ project is helping to improve waste management in Mongolia