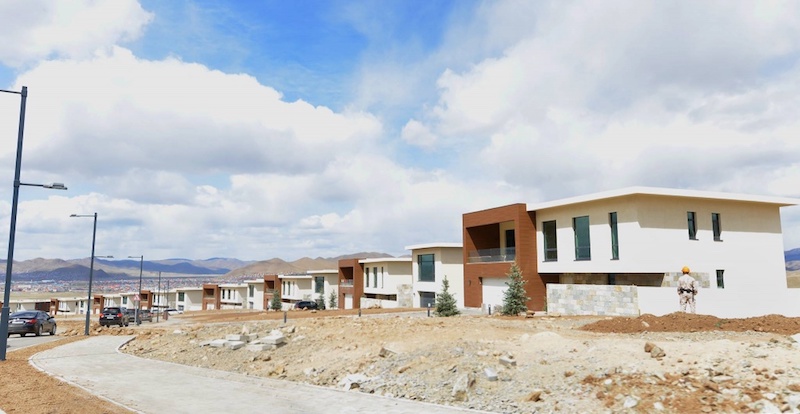 More than 60 officials from 19 ASEM partner countries visited the key sites of the 11th Asia-Europe Meeting Summit (ASEM11) on May 16, reports the official website of ASEM 11. The security and protocol staff from countries, such as Luxembourg, Portugal, the Netherlands, Belgium, Republic of Korea, and the European Union, made visits to Shangri-La Hotel and Mall, ASEM Villa, Chinggis Khaan International Airport, and the Chinggisiin Khuree complex. The ASEM Villa, which will accommodate all the heads of state during the Summit retreat, consists of 53 modern villa houses. The Mongolian ASEM officials explained that the villa construction and interior furnishing have been completed, and that the landscaping and gardening would be completed by the end of June. In regards to Chinggis Khaan International Airport, nine additional aircraft aprons of 4C class have been built, bringing the total aprons to 34. A new transit lounge capable of handling 1,200 passengers an hour has been built anew, and the repair and maintenance of the business class lounge, baggage handling, and departure halls, as well as the air bridges, have been completed. The meeting venues at the Shangri-La Hotel are ready, and the ASEM Office is working on setting up the Press Center at the Shangri-La Mall for foreign and local journalists. The National Council to oversee and organize the ASEM Summit meets every Wednesday. The government and the National Council plans and oversees the budget and action plans for ASEM-related preparations. The Prime Minister apprised the preparations as going as scheduled, with human resources planned evenly. "We Mongolians must organize this large-scale event to create prestige around it. Only after our private, public, and non-governmental sectors are cooperating, can we get behind this daunting task. Many enterprises are actively supporting our activities, this is good. I would like to encourage the citizens to cooperate with the government," said Prime Minister Ch. Saikhanbileg. A total of 5,000 delegates are expected for ASEM11, including presidents of 15 countries, prime ministers and foreign ministers of 21 countries, leaders of international organizations, and media delegates. ASEM Senior Officials Meeting held As a part of ASEM11 Summit side events, the ASEM Senior Officials Meeting was held in Ulaanbaatar on May 12 and 13. The officials discussed commitments to improve connectivity between Asia-Europe peoples, the 20th anniversary of ASEM, cooperation status in 16 fields, and directions for the next 10 years. The officials also held discussions to delineate the Chair's Statement, which will be available at the end of the 11th ASEM Summit, as well as the Ulaanbaatar Declaration. ASEM senior officials hold regular meetings for coordination of ASEM activities, including reaching consensus on decisions to make at the ASEM Summit and ministerial meetings. Another Senior Officials Meeting in Ulaanbaatar is expected to be held from July 12-14. The meeting was attended by over 170 representatives from 51 ASEM partner countries, the European Union (EU), Association of Southeast Asian Nations (ASEAN), and the Asia-Europe Foundation (ASEF). Turkish delegates visit Arkahngai, Bayankhongor and Uvurkhangai A Turkish delegation led by Murat Karagoz, Ambassador Extraordinary and Plenipotentiary from the Republic of Turkey to Mongolia, paid a working visit to Arkhangai, Bayankhongor, and Uvurkhangai provinces from May 11 to 15. The visit was designed to develop relations and communication with local administrators, to study trade and economic opportunities, to promote Turkish culture to local residents, and to present the public with information about the diplomatic operations of the embassy. The Turkish delegates met with the governors of provinces, local entrepreneurs, and area students. Ambassador Karagoz shared his views on agriculture and the tourism sector with Arkhangai Governor D.Bat-Erdene.  In Bayankhongor Province, he met Governor D.Jargalsaikhan and exchanged views on enhancing the education, health, and infrastructure sectors. The delegates raised issues of animal husbandry, tourism, and agriculture during their  meeting with Uvurkhangai Province Governor D.Togtokhsuren, and delivered detailed information on large programs and projects directed at infrastructural development in Uvurkhnagai Province being implemented by the Turkish International Cooperation and Development Agency.
SHARE
Share on Facebook
Tweet on Twitter
Previous article President responds to Constitutional Court letter
Next article Justice ministry to cooperate with NHRCM to monitor human rights