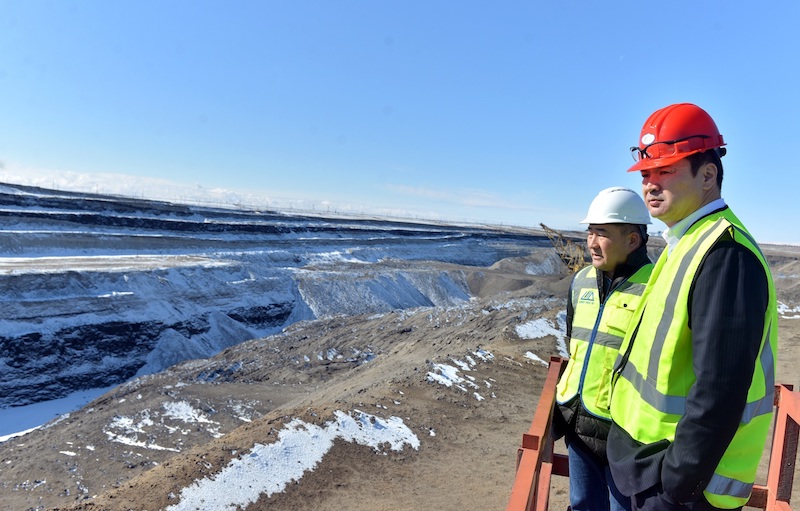 Prime Minister at Shivee Ovoo coal mine site[/caption] Prime Minister Ch.Saikhanbileg conducted a working visit to Dornogobi and Govisumber provinces on March 29 and April 1 to get acquainted with the recent developments in the provinces. During his visit to Dornogobi Province on March 29, the Premier learned about the wind farms in Mandakh and Khatanbulag soums and that work has started to connect the two soums to the central power transmission lines. Other soums of the province have been connected to the central high-voltage power transmission line. The authorities of the province have set a strategic goal to make the province’s economy develop independently by improving the production of goods with potential for commercial success in other sectors, in addition to the construction of the Sainshand industrial complex and a free trade zone at the Zamiin-Uud border point. The Governor of Dornogobi Province, P.Gankhuyag, told the Prime Minister that the province's livestock population has increased in recent years, and cultivation has been improving gradually over the last four years with the support of local residents and authorities for irrigated agricultural production and greenhouse farming. He also mentioned that an experiment was carried out to grow buckwheat and rice in the Gobi with the cooperation of experts from Japan’s Shizuoka Prefecture. Governor P.Gankhuyag said that much attention and care is being devoted to the tourism industry, and the construction of a 42 kilometer road from Sainshand, the center of the province, to Khamriin Khiid, and international energy center being built with an investment of 17.5 billion MNT. “The plan to make Khamriin Khiid a tourism center is successfully underway,” he noted. Noting that one of the main pillars of the development of tourism in Dornogobi is that the province is now connected to Ulaanbaatar with a paved road, the Prime Minister emphasized that the province has great potential to become a leading tourist destination in Mongolia. On the following day, Ch.Saikhanbileg arrived in Govisumber Province to get acquainted with the operations of the Shivee Ovoo coal mine. The Shivee Ovoo coal mine provides 30 percent of Mongolia’s energy consumed coal and 50 percent of the coal demands of Thermal Power Plant No. 4. The authorities of the coal mine said it employs 547 staff, paying an average salary of 1.2 million MNT. The Shivee Ovoo coal mine has not received any investment from the state since 2012. It started operating as the daughter company of state owned Erdenes Mongol LLC in 2013. Mine representatives said that stripping at the mine has increased and that the company conducted upgrades of mining tools and equipment from 2013 to 2015, and that the company funded the purchase of 30.2 billion MNT in new mining machinery and technical equipment. According to a mine official, the company is also organizing work to improve Shivee Ovoo's production potential and to reduce product costs by executing drilling, blasting, the maintenance of electric motors and generators independently, instead of hiring specialists from foreign companies at expensive rates. A non-stop operational system will commence at the mine in 2017, which is expected to result in 2.3 million cubic meters of the mine's surface to be mined in 2017, and 4.6 million cubic meters surface to be mined annually from 2018 to 2020.
SHARE
Share on Facebook
Tweet on Twitter
Previous article Government to raise benefits for children with disabilities
Next article Production and export of heat-processed meat temporarily suspended

Government to raise benefits for children with disabilities

‘Some lawmakers’ budget for their constituencies have been raised’