Public and private sectors to cooperate for disaster risk reduction 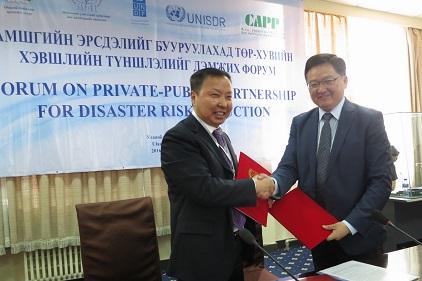 The National Emergency Management Agency (NEMA) and Mongolian National Chamber of Commerce and Industry (MNCCI) signed a partnership agreement during the Forum on Private-Public Partnership for Disaster Risk Reduction, held on June 9, to prevent and reduce disaster risks. Deputy Prime Minister of Mongolia Ts.Oyunbaatar, representatives from nine ministries and government agencies, along with 10 CEOs and several senior directors from 30 major domestic companies attended the forum. “It is important to forge public-private partnerships in disaster risk management for a more resilient Mongolia, and we are delighted that the Chamber of Commerce has come on board in this joint effort. “This represents a significant shift from dialogue to action, and is part of the government’s commitment to the Sendai Framework, which we will implement at all levels. And as the country faces an increased number of hazards, it is important that the private sector itself spread the word on the importance of disaster risk management,” said Ts.Oyunbaatar. President of MNCCI B.Lkhagvajav noted that the organization would play a key role in engaging the private sector in the government’s pursuit. “This is a good opportunity for generating an effective partnership for disaster resilience. Reducing disaster damages and sustaining growth is good for individual businesses and the whole economy,” he said. NEMA and the MNCCI had previously expressed an interest in establishing a branch of the United Nations Office for Disaster Risk Reduction’s (UNISDR) Private Sector Alliance for Disaster Resilient Societies (ARISE) in Mongolia. They invited ARISE’s Asia representative Sandra Wu to the forum to outline the opportunities of this initiative, which already has national branches in Japan and the Philippines. Wu said that the only way to attain disaster risk reduction and resilience is when businesses work together supported by, and supporting, governments. During the forum, NEMA also signed an agreement with the Centre for Asia Pacific Partnership (CAPP), an independent research institute focused on policy research and partnership initiatives to strengthen socioeconomic development. CAPP’s Chairperson S.Lkhagvasuren said that private and public partnership under the leadership of the Mongolian government was the best way to build national resilience. “CAPP is honored to work with NEMA as its partner to promote private and public partnership for disaster risk reduction in Mongolia as one of the vital mechanisms to build a disaster risk resilient community in the country. “We are committed to contributing to the strengthening of disaster risk reduction capacity at all levels, and localizing the best international practices in this field through supporting an establishment of ARISE Mongolia and launching training on disaster risk management in cooperation with UNISDR,” said S.Lkhagvasuren. NEMA has initiated the Public-Private Partnership Platform for Disaster Risk Reduction, for the public and private sectors to work together to strengthen the implementation of the Sendai Framework for Disaster Risk Reduction 2015 to 2030 in Mongolia. It is currently working with ministries to update the implementation plan of the State Policy and Program on Disaster Protection 2012-2020, which will serve as a new national strategy for disaster risk reduction. The program’s initiators believe that doing so will integrate Sendai Framework implementation and monitoring into national systems. The Sendai Framework 2015 to 2030 is a global agreement which aims to bring about substantial reductions in disaster mortality, the number of people affected by disaster, and economic losses by preventing and reducing disaster risk. Source: UNISDR
SHARE
Share on Facebook
Tweet on Twitter
Previous article 224 buses to be imported as part of public transport fleet renovation
Next article 3 implementing agencies of UB closed down