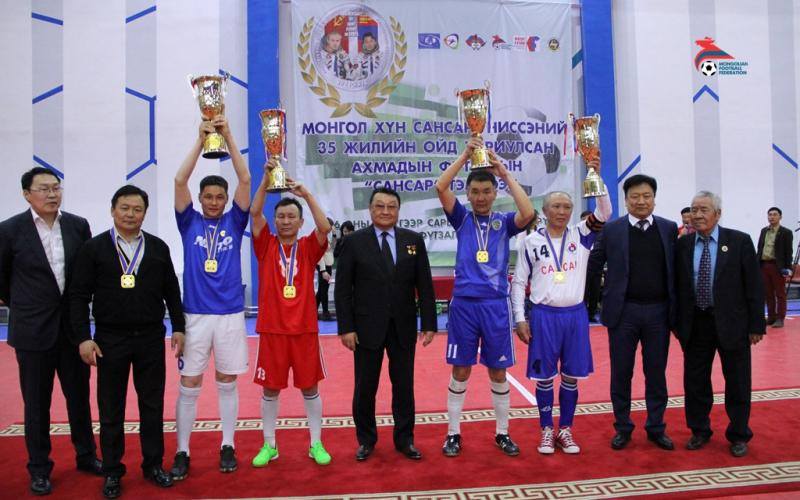 On the occasion of the 35th anniversary of the launch of a Mongolian astronaut into orbit, the Mongolian Football Federation has organized Sansar Cup among senior players from April 4 to 8. The tournament was held specifically in honor of Mongolia’s first and only astronaut to reach orbit J.Gurragchaa. A total of 19 teams competed in the four age categories: 37 to 42, 43 to 48, 49 to 59, and above 60 years of age. In the 37 to 42 category, Goyo FC won first place. Goyo was followed by Sumiyasuren San and Khad. Erchim FC won a gold medal in the 43 to 48 years old category, and was followed by Oyutan-1 and Goyo. In the 49 to 59 years old category, Sukhbaatar team won gold, Oyutan won silver, and Soyombiin Barsuud won bronze. In the above 60 years of age category, Sansar FC came in first place, and was followed by Aldar and Khilchin. Astronaut J.Gurragchaa came to see the tournament and handed medals and prizes to the winners. During the prize handing ceremony, two senior football players met the criteria for the title International Sports Master. J.Gurragchee gave certificates for the title to Continental FC’s G.Davaa-Ochir and head of Ikh Talyn Duulian NGO D.Terbaatar. Khuyagchuluun of Sukhbaatar District team was named Best Goalkeeper of the tournmanet. Aldar Sports Committee’s senior footballer Buyanjargal was named Best Player. Erdenebat of Sukhbaatar District team became Best Forward and Erchim FC’s Otgonbaatar was awarded the Fair Player prize. The Best Referee prize went to Javlhlan. Coach of Oyutan team Batsaikhan was given the Best Coach prize.
SHARE
Share on Facebook
Tweet on Twitter
Previous article Ts.Tsedev-Ochir: We will never give up
Next article Ex-Olympian Gan-Erdene inks Promotional pact