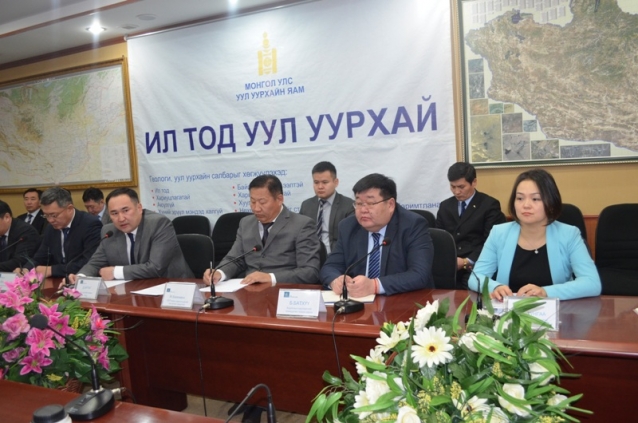 On Wednesday, the Mining Ministry held its regular Transparent Mining meeting, reporting on the sector’s latest news and providing information about mining industry issues. In February, the nation’s mining sector explored 3.6 million tons of coal, 1.1 tons of gold, 199,200 tons of oil, and produced 22,100 tons of fluorspar concentrate, 246,800 tons of copper ore concentrate, 72,400 tons of iron ore concentrate, and 12,300 tons of zinc concentrate. A total of 273,800 tons of copper concentrate, 575,300 tons of iron ore concentrate, 1.7 tons of gold, 1.4 million tons of coal, and 194,900 tons of oil was exported in February. The Mineral Resource Authority generated 5.3 billion MNT for the state budget, while the Petroleum Authority of Mongolia earned 20.7 billion MNT. A parliamentary working group created by order of Prime Minister Ch.Saikhanbileg held the first stage of negotiations on establishing a deposit utilization agreement with Centerra Gold on March 8 to 9 in Toronto. Centerra Gold owns a special license to utilize the Gatsuurt deposit. The second stage of negotiations was held from March 22 to 25 in Ulaanbaatar. The Canadian side expressed interest in establishing deposit utilization, investment and cooperation agreements with local authorities. The sides will work on a program funded by Centerra to protect cultural heritage, and take measures to promoting cultural heritage sites near Noyon Mountain, conduct permafrost research with professional organizations, make and implement a monitoring plan for water resources. Concerning nuclear energy waste and Mongolia's joining of international conventions on nuclear waste, General Secretary of the Nuclear Energy Commission G.Manlaijav told journalists that the public has misunderstood some issues concerning these developments. He said, “Articles 11 and 12 of the convention on nuclear waste management states that a country that creates radioactive waste will be responsible for burying it. But even if Mongolia exports its uranium, there will be no grounds for returning the waste. There are big countries and entities exporting uranium, but there is neither a legal sanction nor convention that says nuclear reactors working with your uranium now return fuel and waste. Such a situation won’t occur.” The Agency for Fair Competition and Consumer Protection announced that prices for fuel can be lowered by 100 MNT. Head of the PAM G.Ulziiburen said that prices for oil are not stable and went up over the last month. He said, “At that beginning of January, prices for oil decreased to 27 USD per barrel. At that time, politicians were making noise, but when prices went up again they became silent. Soon, the mining sector will start working intensively, at that time the prices for fuel will go up again, but we will regulate this issue.” G.Ulziiburen noted that the fuel market is fluctuating by 7.5 to 10 percent, and added that prices for fuel are generally expected to increase.
SHARE
Share on Facebook
Tweet on Twitter
Previous article Advisory Board of German-Mongolian Business Association
Next article Foreign reserves and gold purchase shatter records in 2020