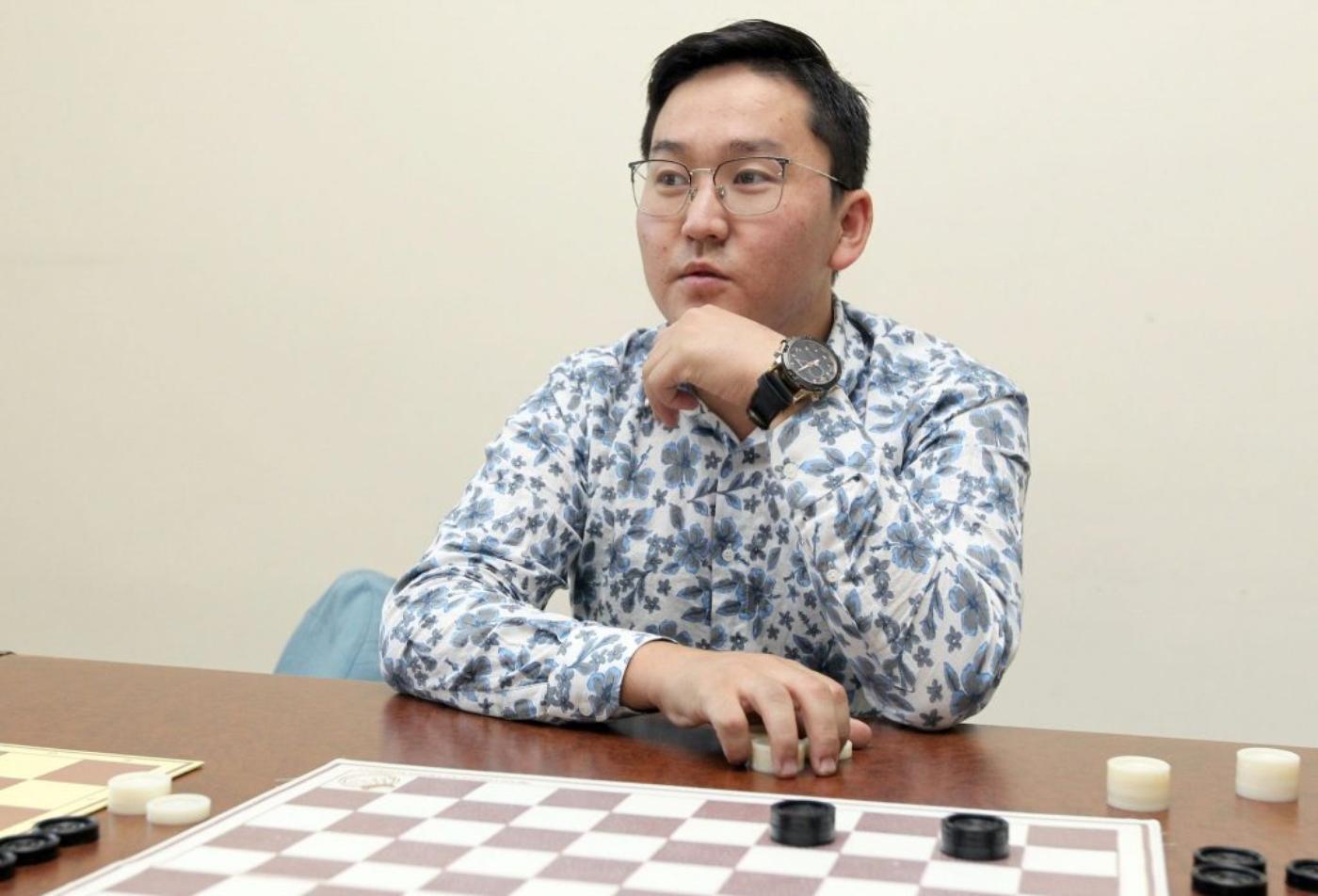 Ts.Sukhbat, master of the World Draughts Federation, athlete of Khasu Megawatt LLC and coach of Khiimori Khulug Club and Mongeni Complex School, is one of the leading athletes in intellectual sports in Mongolia. He won the 2013 Asian Junior Draughts Championship and won a bronze medal at the World Youth Draughts Championship in Dabki, Poland the following year. At this year’s World Championship, he competed against World Champions Alexander Schwarzman of Russia, Martijn van Ijzendoorn of the Netherlands and Yuri Anikeev of Ukraine, finishing fourth in his group with two wins. Ts.Sukhbat gave the following interview to talk about his sports journey.

In the semi-finals of the 2021 World Draughts Championship, held in June in Tallinn, Estonia, you competed against Oum Christian Niami of Cameroon and Yuri Anikeev of Ukraine, right?

The best athletes of the world participated in the 2021 World Championships. In Group D, I competed against four-time World Champion Alexander Schwarzman of Russia and World Champion Martijn van Ijzendoorn of the Netherlands, winning two of nine games and finishing fourth in the group with seven draws. Grandmaster Ijzendoorn won in Group D, followed by Alexander Schwarzman in second place and Grandmaster Oum Christian Niami in third place. They qualified for the finals.

Didn’t you qualify for the finals after players of Russia and Cameroon?

Christian Niami defeated the African athlete. Alexander Schwarzman won the last two rounds and came ahead of me.

The strongest player I competed with was Martijn van Ijzendoorn. It was not easy to play against him. I drew with him twice, but eventually lost to him at the previous World Championship. I made a few moves that I used at the World Youth Championships, but he defended very well. I tied with him in the middle of the game. He excels at classic checkers and has unpredictable moves.

I also found it interesting to play against Schwarzman. His first move was very fascinating. When we played, he made the first move the same way he did against Chinese Grandmaster Zhou Weiqi in 2016 and 2017. I noticed that he studied me very well in a short period of time. I used to watch his games. As I knew his style of play, I decided to make some of his most successful moves against him. He was very lucky in his group. In the sixth round of the finals, he defeated African Grandmaster Joel Atse, creating a competitive atmosphere.

During a competition, do you study tactics and techniques of your opponents, as well as their personality and coach?

From their eyes, body language, movements and moves, I can see my oppenent’s direction and tactics of the game. At the World Championships, Rul Bumstra from the Netherlands showed the most interesting game among the world’s top 40 best draught players. His moves were excellent, perfect if you will. The grandmasters were like, “His moves are like a computer’s. He tries to be precise with every move.” So far, he has not lost a single game. During competitions, he does not make any movements, and does not show emotions through his facial expressions. He reads his opponents’ psychology from their eyes and movements, and even manages to predict their next moves well.

Are you coaching the Mongeni School’s checkers team?

Yes, after the World Championship, I started preparing the school’s national team players for some tournaments. We plan to participate in next year’s World Championships and the Asian Championships. Together with my students, World Champion B.Yesui has been training under my guidance since last year. She competed in the 2018 World Draughts Junior Championship in Gomel, Belarus and became the world champion in blitz. Mongeni School offers advanced chess and draughts training.

When did you become an athlete of Khasu Mega Stars Club?

I didn’t participate in the Junior World Championships for three years because of financial problems. During that time, I studied the moves of the best athletes. In 2014, I started working with the club’s director J.Tumen-Ayush and participating in international competitions.

Asians lead the world in intellectual sports. It’s not easy to compete with best players and qualify from Asia, is it?

When draughts players from five countries competed at the 2013 Asian Junior Championships, I played against fellow Mongolian player Ts.Otgonbileg. I defeated him at the end of the match. Then, I beat Chinese Champion Hyung Jion. At that time, I couldn’t believe that I had become the Asian champion.

In 2017, I trained with athletes of several countries in Shiliin Gol League of Inner Mongolia. During this time, I met and learned a lot from Latvian World Champion Guntis Valneris. In particular, I learned about tactics, how to change direction in the middle of a match, how to manage my time properly, how to study opponents’ physical movements and game moves, and how to use body language in decisive games. A month before this year’s World Championships, I played with him virtually and got advice from him.

“You’ve changed a lot. You were not good in quick checkers before. You played well this time,” he told me shortly after the World Championships. We are always in touch. When I was a kid, Guntis Valneris was called the greatest athlete in the world. He is currently ranked second in the world.

Are you good friends with Valneris?

We became friends when we stayed together in a hotel in Shiliin Gol for more than 50 days. Draughts athletes played for many hours, so we must do some exercises after games. He plays table tennis after training. During his visit to Mongolia in 2017, he learned about the nomadic life and culture. I respect him as a coach.

Have you ever competed in a major competition against Martijn van Ijzendoorn?

After the World Championships, I studied his moves. When I played with him three times, I always had white pieces. I know how he plays, but I cannot guess how he calculates his moves. So I need to make every move smoothly and well. If I move with one sharp or average move, I may lose my momentum and get beaten.

The World Draughts Federation’s updated rankings of players have just been released. At the World Championship in Estonia, you scored 11 points from nine matches and improved your ranking by 36.6 points. You also earned one point for acquiring the international master’s title. Can you talk about that?

The World Draughts Federation updates its rankings every quarter. According to the rankings released on October 1, my participation in the last World Championship gave me a high score, raising my international ranking. I also earned one point for obtaining the international master title.

I am ranked second in Mongolia and third in Asia. Currently, Chinese player Pan Yiming is ranked first, State Merited Athlete D.Erdenebileg is second, I am third and R.Manlai is fourth (in Asia). Our athletes have a high level of intellectual ability, but our success is low due to the lack of governmental support. Russia and China support their athletes well. While training in China, I saw that the country supports its athletes in all respects. From 9:00 a.m. to 1:00 p.m., athletes train and take a nap after their lunch. From 4:00 p.m. to 6:00 p.m., they train again and then play tennis. Initially, it was difficult to adjust to this schedule, but I got the hang of it later.

How do you prepare mentally for international tournaments?

I start preparing mentally three months before a competition. Competitions in Europe start at night in Mongolian time. Therefore, in order to keep my brain active, I prepare during that time. Before participating in the World Championships, I trained with International Grandmasters R.Manlai and Ts.Erdembileg. R.Manlai has many interesting books about draughts. I’ve read most of them.

Can you tell us about your third place finish at the 2014 World Junior Draughts Championships in Dabki, Poland?

In 2014, I became a member of the Khasu Mega Stars Club and competed at the World Championships for the first time. I had become the Asian champion and won a lot of silver medals at the Junior World Championships before this competition. In the seventh round of the World Championships, I defeated Kunitsa Alexey of Belarus. However, I lost to Arthur Tunkiewicz of Lithuania, dropping two places in the eighth round. In the final round of the decisive match, I defeated Yakovlev Sergey of Russia and qualified to play for a medal. Kunitsa Alexey with whom I played against, was the European champion at that time. He is 17 years old now, but he won a bronze medal at the 2013 World Youth Championships. I beat him in an incredible way in a classic game. In the last round, I played against Yakovlev Sergey and won by using “Killer” draughts.

Kunitsa Alexey finished fourth in Group A at this year’s World Championships for adults. The bronze medal I won at the 2014 World Junior Draughts Championships is the second in the history of Mongolian draught players. It is the first bronze won in the men’s category. In 2000, N.Munkhtuya, master of the World Draughts Federation, won a silver medal in the women’s category.

Are you one of D.Elbeg’s students?

When I was in fifth grade at School No. 39 of Chingeltei District, I became a student of teacher D.Elbeg. Prior to that, I had won two district junior and youth championships in chess and one in the adult category. I play chess, but I am strongly drawn to checkers. I practiced both for a while and later specialized in draughts.

In 2013, I trained under the guidance of Master of Sports T.Purevdorj and then chose coach D.Battulga to improve my skills and win the Asian Junior Championships. My goal is simple. Athletes want to be masters, but I aim to be one of the best athletes in the world. 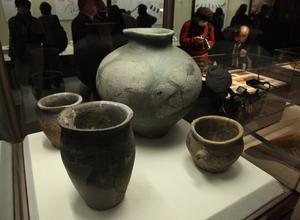 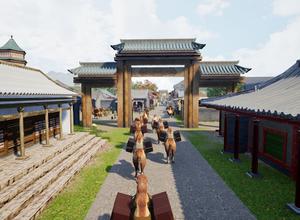