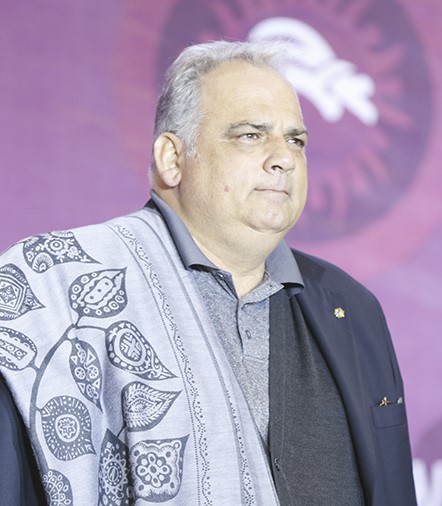 The first Olympic Games World Qualifying Tournament for Rio 2016 in freestyle wrestling and Greco Roman was held at Buyant-Ukhaa Complex in Ulaanbaatar from April 22 to 24. Over 650 wrestlers from 80 countries competed for 48 available Olympic qualification. Following the conclusion of the tournament, News.mn spoke with president of the United World Wrestling (UWW) Nenad Lalovic regarding the organization of the tournament and other matters related to wrestling. How would you evaluate the Olympic qualification tournament organized in Mongolia for the first time? This year is amazing for sportsmen. Everyone is waiting for the Olympic Games that will be held in Brazil in few months. Especially, it is a very responsible time for all sportsmen. This year’s competition for Olympic qualification for Rio 2016 is being organized twice, one of which was successfully held in Mongolia. Over 600 wrestlers from 80 countries made the tournament very competitive. I thank the Mongolian Wrestling Federation for successful organization of the event. I am grateful to all people who helped and provided support for organizing the tournament, including the Government of Mongolia. For the first time, an intense competition for Olympic qualification took place in Ulaanbaatar, and 48 wrestlers received their qualification. Wrestlers from many countries have gathered in Mongolia for the first time and they all competed for Olympic qualification. What is your impression of Mongolian wrestlers? Top freestyle wrestlers came to Mongolia. Young wrestlers also participated in the tournament, showing great performances. In recent years, achievements of Mongolian wrestling teams are advancing. This time, Mongolian wrestlers competed for three Olympic quotas, but they didn’t win them. However, the next opportunity will be provided at the tournament in Turkey. I felt that Mongolians really do love wrestling, after hearing cheers from the people gathered at the tournament. I am thankful to all Mongolians for supporting freestyle wrestling. Seeing the atmosphere in the audience, I was happy from the very first day. Even though Mongolians didn’t compete in Greco Roman, I am confident that Mongolian wrestlers came to aspire after watching the matches for Olympic and World Championship qualification. Do you think Mongolia will host many more world-class competitions in the future? Getting a right to host a tournament for Olympic qualification isn’t easy for any country. In the past, Mongolia successfully organized the Asian Youth Wrestling Championship in 2014 and the World Cup for female freestyle wrestlers. Mongolia showed that it can organize such reputable competitions before, that’s why the UWW decided that Mongolia is able to host the tournament for Olympic qualification. There are some issues that Mongolia needs to pay attention to and improve, such as accommodation for athletes and training halls. The UWW has high requirements for organizing any kinds of competition. Previously, host countries paid 500,000 CHF to the UWW for the right to host, but the money was raised to 2.5 million CHF. Requirements for prizes to wrestlers are also becoming higher. That’s why countries that want to host tournaments need to be well prepared. I am confident that Mongolia, a country which loves wrestling, will host many more competitions in the future. Thank you to all Mongolians who have been present with all the amazing victories and defeats of freestyle wrestlers.
SHARE
Share on Facebook
Tweet on Twitter
Previous article Ts.Tsedev-Ochir: We will never give up
Next article Ex-Olympian Gan-Erdene inks Promotional pact