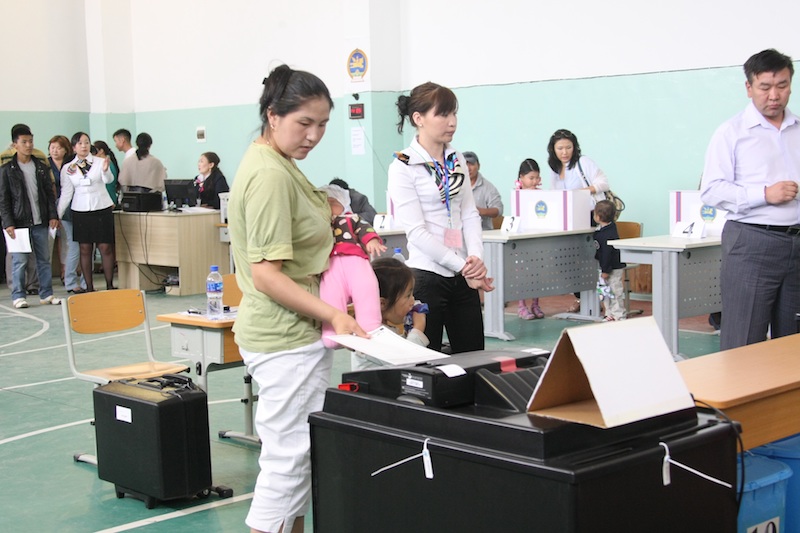 Today, June 29, 2016, Mongolians are writing a new chapter in history and determining the country’s future by casting votes in the parliamentary and  Citizen's Representative Khural elections from 7:00 a.m. to 10:00 p.m. Nearly two third of Mongolians expected to vote A total of 1,912,901 voters are eligible to participate in the legislative elections nationwide, and there are 924,629 citizens eligible to vote for candidates to fill 397 posts representing nine districts in Ulaanbaatar. Some 498 candidates participated in the 2016 parliamentary elections, and 2,786 candidates ran campaigns in Citizen's Representative Khural elections in the provinces and the capital . Polling stations prepared Pursuant to the Law on Elections, some 2,687 voting machines and 2,500 ballot counting devices were distributed to polling stations. Special entrances and exits for people living with disabilities were set up at polling stations, and ballots were printed in Braille for visually impaired citizens. Some 3,978 citizens will cast their votes in a mobile polling station due to their health conditions. Some 450 foreign observers to observe the 2016 elections Around 20,000 state servicemen are part of the election organizing team. According to the General Election Commission, a total of 413 journalists and reporters from 51 domestic media outlets are reporting on the election. Around 450 foreign observers from over 50 countries are observing 2016 election procedures in the capital and the provinces. No license plate restrictions on Election Day On Election Day, the Metropolitan Traffic Police Department will not be enforcing license plate limitations, allowing all citizens to participate in traffic to cast their votes. Alcohol sales prohibited for 3 days Ulaanbaatar Mayor E.Bat-Uul issued a decree prohibiting public events and alcohol sales on Election Day. The decree states that it is not permitted to organize any public events, cultural events, or indoor and outdoor entertainment and sport activities. According to the mayor’s decree, alcohol won't be sold or served on Election Day or the day after (June 30), followed by July 1 (a regularly scheduled alcohol-free day) to prevent criminal activities. Large trade centers closed Under the law, Election Day is officially a public holiday. Therefore, all businesses and organizations must provide employees with the opportunity to vote. Large grocery stores, outdoor markets, trade centers, construction material markets, and auto part sales and service markets will be  closed to avoid potential crimes and violations related to the election, as well as to reduce traffic congestion.
SHARE
Share on Facebook
Tweet on Twitter
Previous article Can code of ethics ‘educate’ lawmakers?
Next article What’s stopping privatization of State Bank?