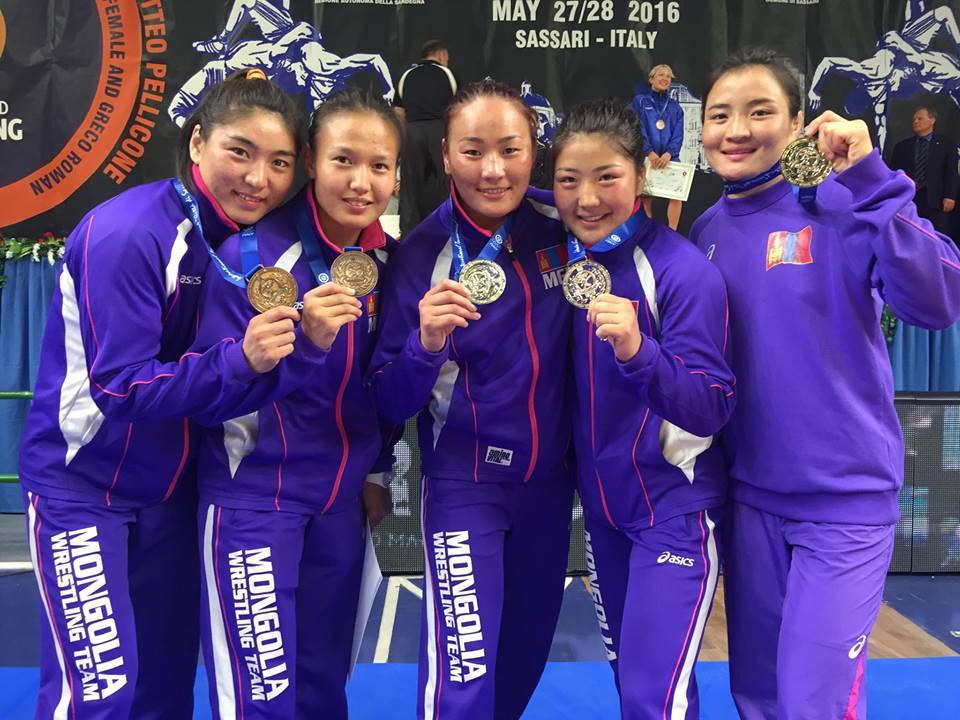 The women’s national freestyle wrestling team of Mongolia won three gold and two bronze medals at Memorial Matteo Pellicone 2016 held in Sasari, Italy, on Sunday. Freestyle wrestlers S.Tserenchimed, E.Gantuya, P.Orkhon, B.Shoovdor, S.Battsetseg, and O.Nasanburmaa were joined by coaches B.Batbayar and Z.Duvchin for the international competition. P.Orkhon defeated fellow Mongolian S.Tserenchimed in the second round, and beat another of her compatriots, E.Gantuya, in the semifinal of the women’s 58 kg division. P.Orkhon claimed a gold medal after easily defeating her Russian rival in the finale. E.Gantuya won the 58 kg bronze medal after defeating S.Tserenchimed in the semifinal. B.Shoovdor won against wrestlers from Kazakhstan and Italy in the preliminaries, and had a difficult match against a Canadian wrestler in the semifinal, which she won 11:7. She defeated an Italian wrestler in the finale for the women’s 60 kg division and claimed a gold medal. O.Nasanburmaa found an easy victory against an Italian wrestler in the first round of the women’s 69 kg, and eventually landed a gold after defeating a French wrestler 10:0 in the finale. S.Battsetseg earned a bronze medal in the women’s 63 kg after losing to a Russian wrestler in the semifinal. The women’s national freestyle wrestling team will next compete in the 20th Poland Open, set to take place from June 17 to 19, in Spala, Poland.
SHARE
Share on Facebook
Tweet on Twitter
Previous article Smartphone addiction harms children’s mental health
Next article The EU-funded ‘Sustainable Plastic Recycling in Mongolia’ project is helping to improve waste management in Mongolia