11TH ASEM SUMMIT '20 YEARS OF ASEM: PARTNERSHIP FOR THE FUTURE THROUGH CONNECTIVITY' 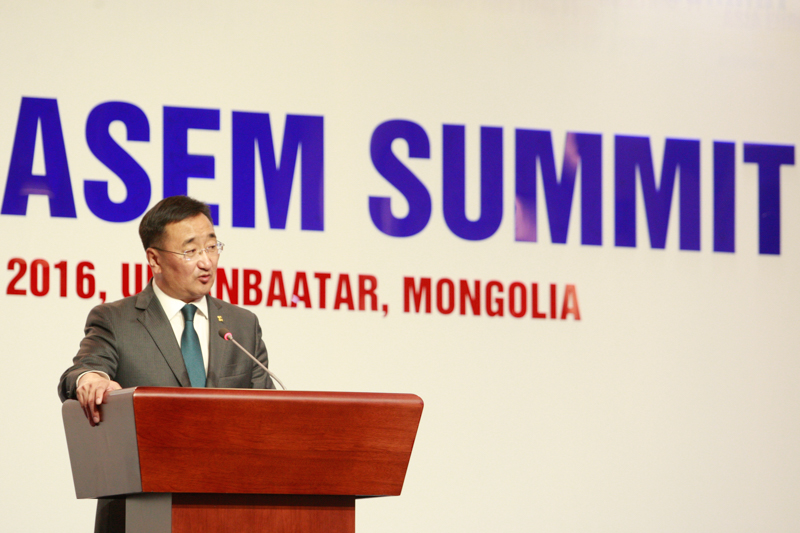 ASEM11 Summit leaders presented the ASEM Chair’s Statement on July 16, concluding the Summit. process and their vision for its future was reflected in the Ulaanbaatar Declaration adopted by the Leaders on the occasion of the 20th Anniversary of ASEM. They also exchanged views on the current political and socio-economic situation in the world and their respective regions, and discussed ways and means to address the existing and emerging challenges to international and regional peace, security, stability and sustainable development. Shared Common Goals for Future the need to use energy including natural gas more efficiently, increase the deployment of renewable energy sources and to promote research and development of innovative sustainable energy solutions and technologies. With regard to the development of nuclear energy for peaceful purposes, they are committed to promote nuclear safety, nuclear security and safeguards. They reaffirmed their support for strengthening global and regional cooperation in the peaceful uses of nuclear energy, including in the field of nuclear safety, and for upholding a strong commitment to the IAEA safety requirements and standards in order to continuously improve safety of nuclear facilities around the world. It was noted that several ASEM member states are pursuing ambitious nuclear energy programmes, considered as part of their strategy for clean energy and climate change. Leaders acknowledged the need for continuous cooperation within ASEM and with the International Atomic Energy Agency (IAEA) on safeguards, nuclear safety and security, the sharing of experience and best practices among relevant policymakers and experts. Leaders noted the importance of the establishment of the Low Enriched Uranium Bank (LEU) under the auspices of the IAEA, recognizing this as a significant step that will facilitate peaceful cooperation and strengthen nuclear non-proliferation. Leaders also welcomed the upcoming EXPO 2017 in Astana dedicated to “Future Energy”, which will give an excellent opportunity for cooperation in the field of science and technology. encouraging firms to take up their responsibility and apply, where relevant, international guidelines including the ILO Tripartite Declaration of Principles concerning Multinational Enterprises and Social Policy (ILO MNE Declaration), the UN Global Compact and the UN Guiding Principles for Business and Human Rights. They encouraged that international labor standards and domestic laws regarding work-related health and safety rules are upheld and protection of the environment is given due consideration in their supply chains. In that regard, Leaders stressed the need for promoting labour rights and safe and secure working environments for all workers, including for migrant workers, in particular women migrants and those in precarious employment, and also acknowledging the need to, inter alia, end all violence and discrimination against them. They also expressed their support for deepening joint engagement of all stakeholders including governments, businesses, civil society and labour organizations in the ASEM process. Enhancing Connectivity in All Dimensions Members’ trade policies and settling disputes, Leaders welcomed the positive outcomes of the Tenth WTO Ministerial Conference held in Nairobi in 2015 including the process of enlargement of WTO and considered of primary importance the implementation of Bali and Nairobi decisions. In their view, these elements as well as advancement of negotiations on the remaining Doha issues and achievement of an early entry into force of the Trade Facilitation Agreement would bring significant economic results. Cooperation on Political and Security Issues (IAEA) safeguards and achievement of denuclearization of the Korean Peninsula in a complete, verifiable and irreversible manner. They called for vigilance against nuclear and missile related procurement by the DPRK and any other assistance to its nuclear and missile programme. emergencies, migration and refugee challenge, smuggling and trafficking in persons occurring in Asia and Europe. They highlighted the need for comprehensive regional and international responses, including those related to addressing the root causes of irregular migration and forced displacement and to providing support to people in need of protection, including access to education, livelihood and services, support for the most vulnerable displaced and host communities and raising awareness in at-risk communities consistent with relevant international standards and in accordance with domestic laws, regulations and policies. They underlined the responsibility of the countries of origin, transit and destination to cooperate to promote safe and orderly movement of persons; to ensure return and facilitate reintegration; to respect international law including international humanitarian law and international refugee law. They further noted the upcoming 9th Global Forum on Migration and Development in Dhaka in December 2016, which will provide an excellent opportunity in forging meaningful cooperation in this particular field. Rethinking Working Methods Meeting  in  2017  and  instructed  the  Senior  Officials’  Meeting  on  Trade  and Investment which is planned to be held in Mongolia later this year to make a decision on this matter. Summit as a valuable input to ASEM activities. They also expressed their appreciation for holding in Ulaanbaatar the 7th Model ASEM as one of ASEF’s flagship youth projects and agreed to continue this event on a regular basis in conjunction with the ASEM summits. Ministers’ Meeting (ASEM FMM13) in the second half of 2017 in Nay Pyi Taw.
SHARE
Share on Facebook
Tweet on Twitter
Previous article Smartphone addiction harms children’s mental health
Next article The EU-funded ‘Sustainable Plastic Recycling in Mongolia’ project is helping to improve waste management in Mongolia