The Independent Authority Against Corruption compiled the 2020 declarations of income and assets of high-ranking state officials, including lawmakers and Cabinet members.

In 2020, Mongolia’s economy shrank for the first time in 27 years by 5.3 percent due to the COVID-19 pandemic. Statistics show that 27,000 businesses lost revenue due to long-term lockdowns and border restrictions, and 98,000 companies were inactive in 2020.

It is interesting to see how the income of parliamentarians and ministers has changed during this time, and here are the most interesting numerical facts.

INCREASE AND DECREASE OF ASSETS AND INCOME

D.Unurbolor has been working as director and board member of Seoul LLC since 1997, while L.Enkh-Amgalan owns shares in Intergroup International LLC and S.Amarsaikhan owns shares in Oyuny Undraa Group LLC and Evo Wellness LLC.

According to the 2020 report, the assets of five parliamentarians had increased compared to 2019. For instance, lawmaker and Minister L.Enkh-Amgalan increased his assets and income by 14.8 billion MNT, legislators Ts.Munkh-Orgil by 7.2 billion MNT, B.Choijilsuren by 4.4 billion MNT, N.Uchral by 2.5 billion MNT, and E.Bat-Amgalan by 2 billion MNT.

In 2020, L.Enkh-Amgalan has the highest income of 8.3 billion MNT, followed by B.Delgersaikhan with 5.5 billion MNT and B.Choijilsuren with 5.02 billion MNT.

This shows that Minister L.Enkh-Amgalan is leading in terms of revenue and capital growth.

For them, the economic crisis of the pandemic has had a positive, rather than a negative effect.

In contrast, the assets and income of 13 lawmakers, including B.Delgersaikhan, S.Batbold and J.Ganbaatar, decreased compared to 2019. In particular, J.Ganbaatar’s assets decreased by 16 billion MNT due to decline in savings.

LAWMAKERS WITH SAVINGS OF OVER 6 BILLION MNT

B.BAT-ERDENE HAS THE LARGEST HERD

B.Bat-Erdene has the most livestock. He declared that he had 2,100 sheep and 407 horses. Fifteen Parliament members have race bred horses. In particular, P.Anujin has 240 horses, J.Bat-Erdene has 60, and Sh.Adishaa has 51.

Prime Minister L.Oyun-Erdene was among the 10 people whose livestock value increased the most. The value of his livestock increased by 14.4 million MNT to 114.9 million in 2020.

Among Cabinet members, Minister of Energy N.Tavinbekh has the most livestock, with 583 horses, 1,510 sheep and 180 goats.

27.6% OF PARLIAMENTARIANS DON’T OWN JEWELRY

Energy Minister N.Tavinbekh and Minister of Environment and Tourism N.Urtnasan stated that they did not have jewelry.

G.AMARTUVSHIN HAS THE MOST LOANS

According to the 2020 report, 47 percent, or 36 lawmakers have taken out loans. Legislator G.Amartuvshin has the largest loan of 1.02 billion MNT, N.Uchral 500 million MNT and Ts.Munkh-Orgil 410 million MNT, while O.Tsogtgerel has 6.8 billion MNT in receivables and S.Byambatsogt has 4.9 billion MNT.

G.Munkhtsetseg has the lowest amount of debt of 3 million MNT. Other members received loans of more than 13 million MNT.

10 LAWMAKERS DON’T OWN A CAR

The majority of lawmakers have Toyota Land Cruiser 200 and Lexus 570. Three lawmakers reported that they had Mercedes Benz G-500.

This time, lawmaker J.Erdenebat’s assets and income were not registered. He was released from prison and his mandate was ratified by Parliament last March. On January 15, the Supreme Court annulled the verdict of the primary and appellate courts regarding former Prime Minister J.Erdenebat’s corruption case and decided to return it to the prosecutor for further investigation. Therefore, his 2020 income data may not have been included.

Moreover, the assets and income of Minister of Culture Ch.Nomin were not included. She was appointed as minister this year, so her declaration was not registered in the 2020 report.

Last year, some members’ incomes and assets had increased dramatically, while others declined sharply. Generally, their income and assets are higher than the average Mongolian household. However, among the wealthy lawmakers, there is one who took a government soft loan for his child.

Deputy Prime Minister S.Amarsaikhan’s son acquire a soft loan from the Education Loan Fund under the Ministry of Education and Science. His son A.Erdenekhuslen received a loan of 27,166 USD, or 77,423,100 MNT, from the fund for tuition fees at the University of Bristol in the UK. The Education Loan Fund transferred the loan on February 16, shortly after S.Amarsaikhan was appointed as deputy prime minister on January 30. 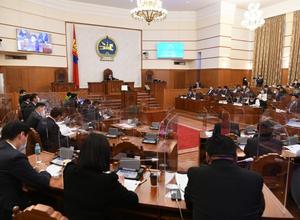