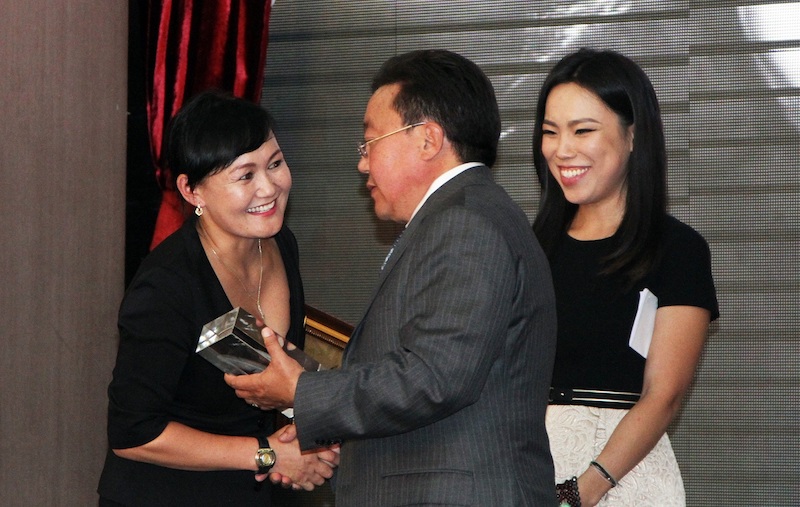 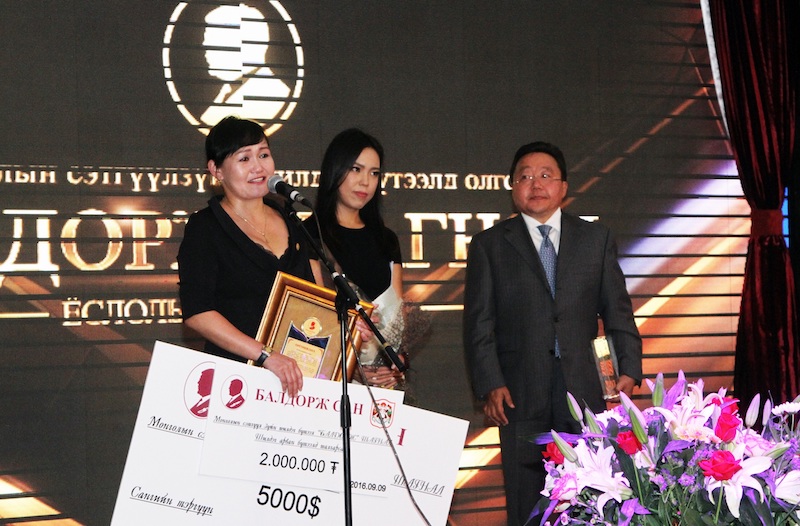 The eighth Baldorj Awards ceremony for journalists kicked off grander than ever on September 9 at the Ulaanbaatar Hotel, in line with the 20th anniversaries of Mongol News Group and The UB Post. President of Mongolia Ts.Elbegdorj, first President of Mongolia P.Ochirbat, Members of Parliament, notable journalists and publishers joined the biggest and most prestigious annual event for journalists in Mongolia, the Baldorj Awards. The ceremony was opened by President of Mongolia Ts.Elbegdorj, CEO of Unuudur and The UB Post B.Nandintushig, and chairman of Baldorj Foundation and former President N.Bagabandi, whose speech was presented by the host as he could not attend due to personal reasons. While N.Bagabandi and Ts.Elbegdorj’s speeches alluded to the contribution and significance of journalists in society, B.Nandintushig shared memories of her father, Ts.Baldorj, the founder of Mongol News Group and a well-respected journalist who advocated for the freedom of the press. The Grand Prix of the Baldorj Awards went to Zasgiin Gazar Medee’s deputy editor Ts.Tseveenkherlen, who was a student of Ts.Baldorj himself. She burst into tears the moment her name was announced. Her “Chonon Surgiiin Suulchiin Uchil” (The Final Plea of the Wolf Pack) and “Chenj Tuluvluguunii Zolios” (Victims of Dealers’ Plan) series of articles, published earlier this year, impressed many environmental experts and the judges of the Baldorj Awards, making her the winner of the eighth Baldorj Awards.

President Ts.Elbegdorj presenting Grand Prix of the Baldorj Awards to Ts.Tseveenkherlen[/caption] “I became interested in the environmental field thanks to my chief editor. Protecting the environment requires a lot of effort I’m happy to receive this award on the 20th anniversary of Unuudur newspaper. I’d like to pass on my chief editor’s words: Think of the future and protect the environment without seeking personal gain,” shared Ts.Tseveenkherlen during her acceptance speech. Ts.Tseveenkherlen started off her career at Unuudur newspaper of Mongol News Group. She holds high reputation among fellow journalists and media representatives for her series of investigative journalism in the environmental field. The second prize was awarded to journalists D.Ayurbuni and B.Undarmaa of TV 25 Channel for their joint program, “1,000 MNT”. Unuudur’s social and breaking news columnist L.Ganchimeg was name the Best Young Journalist by the Mongolian Youth Federation at the Baldorj Awards. This year, 62 articles were submitted for the awards and through three stages of evaluation, the top 10 were chosen and prized.
SHARE
Share on Facebook
Tweet on Twitter
Previous article Smartphone addiction harms children’s mental health
Next article The EU-funded ‘Sustainable Plastic Recycling in Mongolia’ project is helping to improve waste management in Mongolia