A MONGOL WITHOUT A HORSE IS LIKE A BIRD WITHOUT WINGS 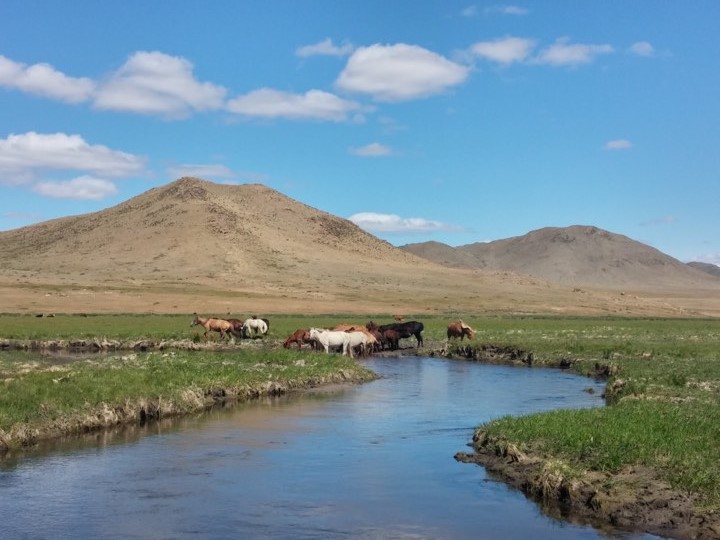 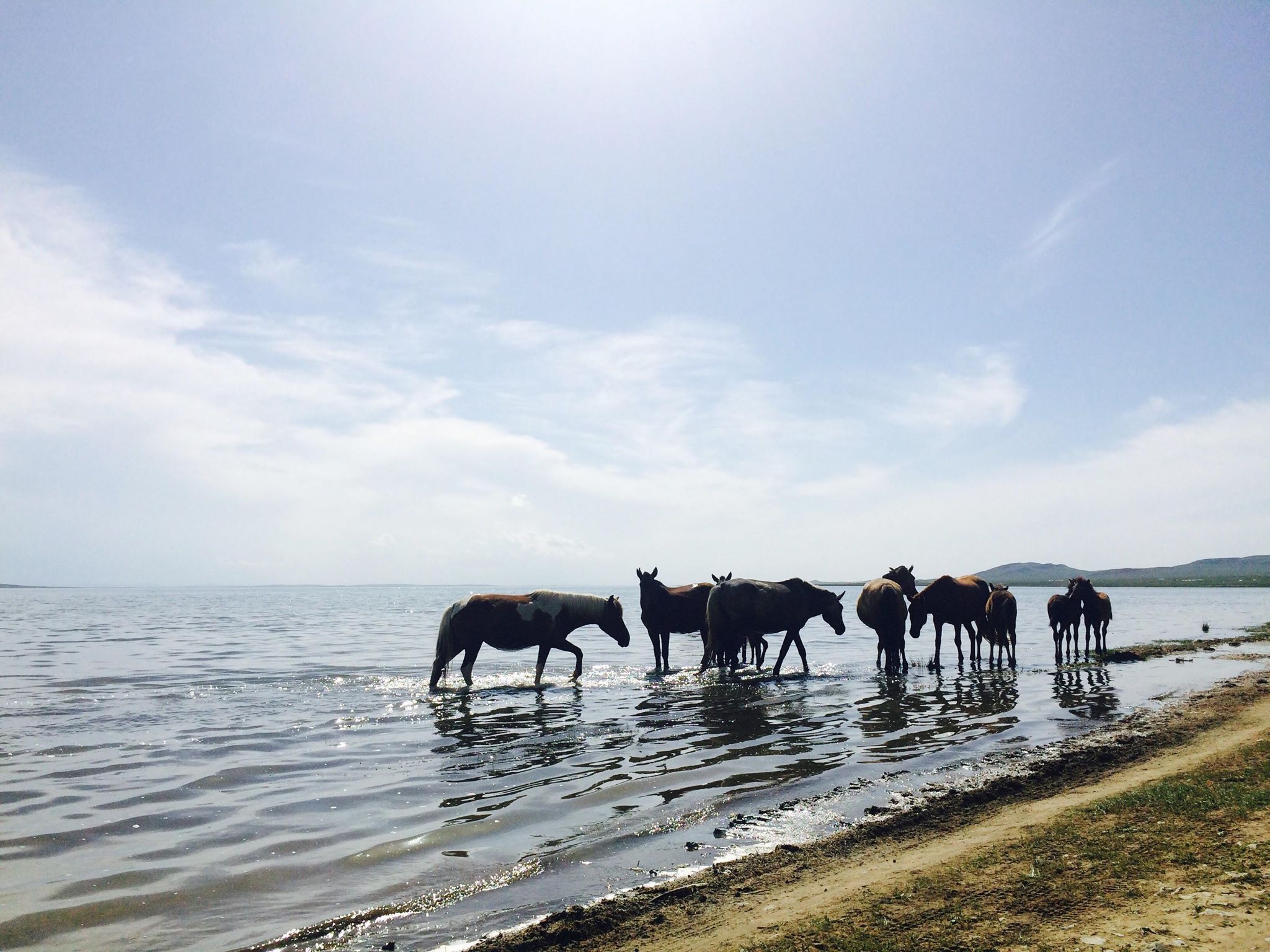 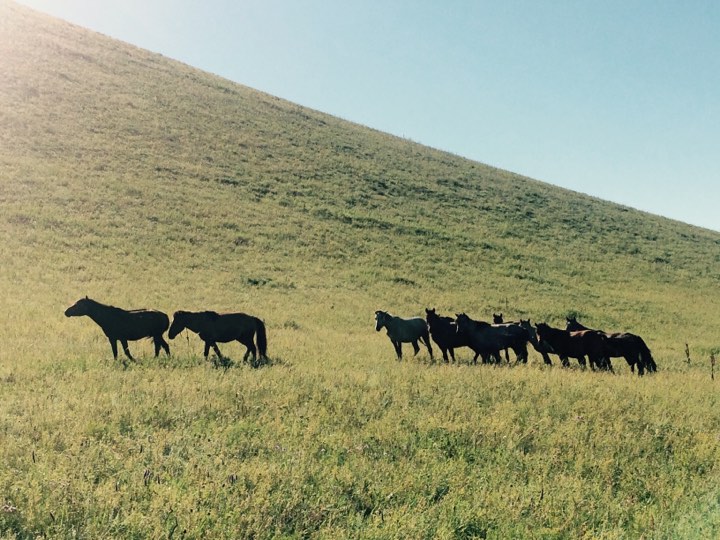 There are around 3.3 billion domestic animals in the world, of which 1.7 percent are horses. In other words, there are over 60 million horses of around 250 breeds, of which two percent are in Mongolia. Mongolia is ranked first by the number of horses per 1,000 people. In a landlocked country of only three million people, the three million horses remain integral to everyday life in Mongolia. Mongolia remains one of the last places on earth where the relationship between man and horse is symbiotic. Nomads of the central Asian steppes have been documented as riding horses since 2000 BC. Tests have shown that among all horse breeds, Mongol horses feature the largest genetic variety. This indicates that it is a very archaic breed suffering little human-induced selection. The data also indicate that many other breeds descend from the Mongol horses. The Mongol horse was approved in 1990 as an independent breed. THE MONGOL HORSE Mongol horses are of a stocky build, with relatively short but strong legs and a large head. They weigh about 270 kg and range in size from 122 to 142 cm in height. Their cannon bone external circumference is about 200 mm. Mongolian horses have great stamina although they have small bodies, they can gallop for 10 km without a break. When pulling a cart, a team of four Mongol horses can draw a load of 2,000 kg for 70 to 80 km a day. In Mongolia, horses live outdoors all year, dealing with temperatures from 45 °C in summer, down to −45 °C in winter. Horses typically eat nothing but grass and require very little water, a trait useful for survival in environments like the Gobi Desert. A horse may drink only once a day. In the winter, Mongol horses remove snow with their hooves to eat the grass underneath. For water, they eat snow. As such, horses are not an expensive luxury item as in Western culture, but a practical necessity of everyday life for herders. Herdsmen regard their horses as both a form of wealth and a source of the daily necessities such as transportation, food, and drink. Despite their life in semi-feral conditions, most horses live to be 20 to 40 years old. A nomad with many horses is considered wealthy. Mongolians do not give their horses names. Rather, they identify them by their color, markings, scars, and brands. Over 500 words in the Mongolian language describe the traits of horses with 250 terms for coat color/pattern alone. Additionally, in the mountains, the number of dark horses is large, while horses with the light color such as sandy are many in the Gobi steppes. This is a feature that adjusts to the weather conditions. The most interesting thing is that Mongol horses are able to find their homeland at any time.

Of the five kinds of herd animals typically recognized in Mongolia (horses, camels, oxen/yaks, sheep, and goats), horses are seen to have the highest prestige. Mongol horses are valued for their milk, meat, and hair. Other than that, they serve as riding and transport animals. They are used both for the daily work of the nomads and in horse racing. In the summer, mares are milked six times a day, once every two hours. The milk is used to make the fermented drinks of Mongolia, airag or kumis. Of the various animals milked by Mongolians, horses give milk for the second longest period of time beginning midway through July and last until late November. In addition, mare's milk has been used in ceremonies of purification, prayer, and blessing since antiquity. Horse meat is considered the healthiest, most delicious kind of meat. Each 360-400 kg Mongol horse yields about 180-200 kg of meat. There are 2,500-3,000 calories in one kg of horse meat. During the extremely cold Mongolian winter, some people prefer horse meat due to its low cholesterol. It is kept unfrozen, and traditionally people think horse meat helps warm them up. But also, horse meat and fermented mare’s milk are used for healing many diseases such as lung disease, hepatic, osteoporosis, chronic colitis, chronic kidney inflammation, and hypertension. Mongols have many stories and songs about horses. The horse has long played a role as a sacred animal, and Mongols have a variety of spiritual beliefs regarding them. The mane is believed to contain a horse's spirit and strength. For this reason, the mane of stallions is always left uncut. The horse's hair can be used for a number of products, including rope, fiddle strings, and a variety of ornaments. Tail hair was also used in the creation of musical instruments. The traditional Mongolian morin khuur has two strings made of horse hair. Due to the spiritual significance of a horse's mane, black and white mane hair was used to make spirit banners. Black hair indicated a war tug (banner) and white hairs a peace tug. The black hair was taken from bay horses. Warriors wore a peaked helmet with a plume of horsehair on top. The skin of horses was preferred over that of other animals because it was said to keep its flexibility despite the frigid temperatures of the steppe. Mongol warriors also wore armor made from horse leather soaked in horse urine. The drums used by shamans in rituals were often made of horsehide. Moreover, the horse dung is gathered as fuel for fire due to little wood on the steppe.

Horse racing is one of the three manly arts. Horse racing is the second-most popular event in Mongolia, after traditional wrestling. Mongolian races are long, up to 30 km, and can involve thousands of horses. The native horses have excellent endurance. Though foreign breeds are faster than Mongolian horses, they are usually exhausted by the end of the run, while the Mongolian horses still have wind. Racing horses with a child in the saddle run in full gallop over 35 km at a time. Children are used instead of adults because they are lighter. The breed is purported to be largely unchanged since the time of Chinggis Khaan. WAR HORSE Mongol horses were a key factor during the 13th-century conquest of the Mongol Empire. The Mongol army’s battle tactics depended on their sturdy, agile and durable horses. With their Mongol horses and compound bows, the Mongol armies conquered lands from China to Hungary, from northern India to Russia. The Mongol soldier relied on his horses to provide him with food, drink, transportation, armor, shoes, ornamentation, bowstring, rope, fire, sport, music, hunting, entertainment, spiritual power, and in case of his death, a mount to ride in the afterlife. Mongol horses made excellent warhorses because of their hardiness, stamina, self-sufficiency, and ability to forage on their own. The main disadvantage of the Mongol horse as a war steed was that it was slower than some of the other breeds it faced on the battlefield. Soldiers preferred to ride lactating mares because they could use them as milk animals. In times of desperation, they would also slit a minor vein in their horse's neck and drain some blood into a cup. This they would drink either plain or mixed with milk or water. Each warrior would bring a small herd of horses with him (three to five being average, but up to 20) as remounts and he would switch from riding one to another during a day’s campaign, ensuring that no one horse was ridden to exhaustion. This greatly enhanced the Mongol army’s mobility as they could and did travel great distances, often covering 90 to 150 km in a day. Because of this unheard of mobility, no other army could match them. Mongol battle tactics stemmed from the Mongol’s nomadic lifestyle. Mongols spent their lives on horseback, herding and hunting. These skills easily transferred to warfare. The Mongol army trained every day in horsemanship, archery, hand-to-hand combat and in battle formations and drills. Their generals tried to anticipate every possible enemy move and then trained their soldiers to counteract those moves. All Mongol warriors and their horses received this constant training, making them the best-disciplined fighting force in the world. Furthermore, during the World War II, Mongolia was the only supplier of horses for the Soviet Union. During the four years of war, over 500,000 horses were supplied from Mongolia. One of every five horses in the war front was a Mongol horse. A memorial statue depicted a Mongol horse carrying heavy guns to Berlin were set up in Moscow in May 2015.

MONGOLIAN HORSEMANSHIP The education of a modern Mongolian horseman begins in childhood. Parents place their children on a horse and hold them there before they can even hang on without assistance. By age six, children can ride in races, by age 10 they are learning to make their own tack. Materials such as books on horse training or medical care are uncommon and seldom used. Information is passed down orally from parent to child. Last years, the increasing number of herdsmen migrated to the city, making the beautiful countryside empty. The new generations growing in the cities don’t ride horses and have limited knowledge of words used for describing and explaining livestock. Moreover, the role of Mongol horses in daily life has shrunk due to the ubiquitous use of cars in Mongolia. Herdsmen have started using trucks to move and motorcycles to herd animals. With around 60 million live stocks, including 3.6 million horses, Mongols should keep developing agriculture instead of eliminating it. Instead of mining, agriculture and animal husbandry could play a central role in the development of the country, and as a bonus, Mongols will keep their nomadic tradition at the same time. Stock-farming and Mongol horses are an immovable part of Mongolian roots, as the saying goes “A Mongol without a horse is like a bird without wings”. Elizabeth Kendall, who traveled through Mongolia in 1911, observed, “To appreciate the Mongol you must see him on horseback,—and indeed you rarely see him otherwise, for he does not put foot to the ground if he can help it. The Mongol without his pony is only half a Mongol, but with his pony, he is as good as two men. It is a fine sight to see him tearing over the plain, loose bridle, easy seat, much like the Western cowboy, but with less sprawl.”
SHARE
Share on Facebook
Tweet on Twitter
Previous article DP’s internal strife intensify
Next article Does e-learning justify high tuition fees?