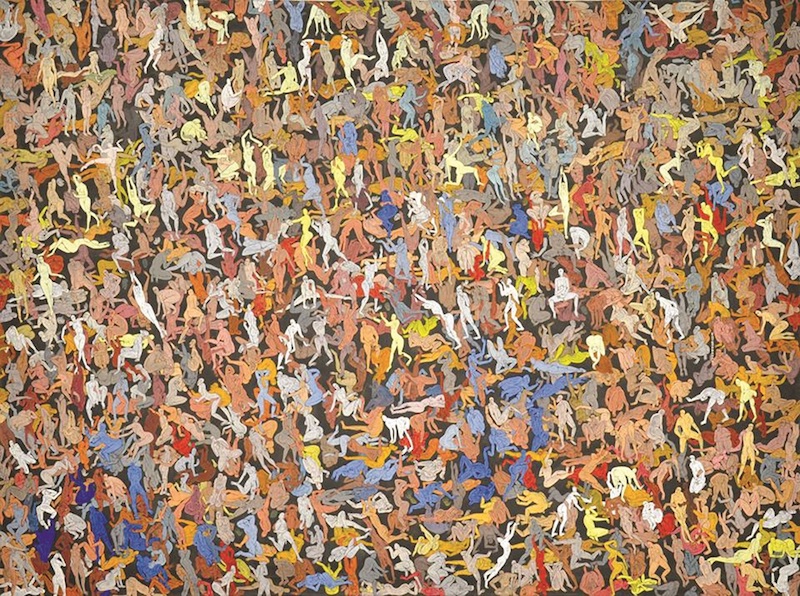 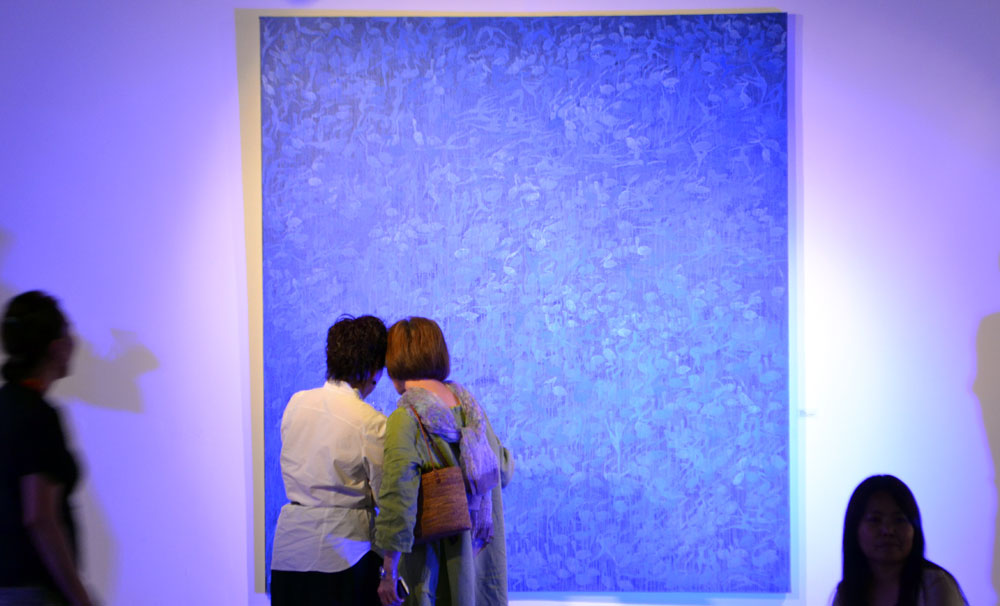 The winner of Grand Prix of the International Biennale of the Painting Chisinau – 2015, artist Otgonbayar Ershuu is presenting his works in his independent exhibition “Blue” at ART SPACE MONGOLIA Gallery in Shangri-La Centre until September 1. Known as to the world as Otgo, Otgonbayar is promoting Mongolia to the world with his art works. Living in between Berlin, Zurich and Ulaanbaatar, Otgo has already marked his name to the world with his works. The following is the brief discussion of his art works with reporter of “Unuudur” Daily newspaper Erdenetsetseg: One of your famous series of artworks “Roaring Hoofs” are on display. One color-oriented, the paintings look unfinished. Why is that? I was commented many times that when one look at them for the first time, they have an impression that paintings are one-color oriented and unfinished. But it is not. Initially, the main depiction of “Roaring Hoofs” were horses. Then in the long run, the context of the paintings has been enlarged and the expression of the whole series paintings  were featuring the art work’s context. Lately, I have been testing gold powder mix in my paints. Now I have defined my general technique upon long-term experiment and research. I am planning paint with gold powder tint mix. The paintings on display also were created with such technique and that’s its color looks unusual. The technique to use gold flakes in paintings is inherited from the ancient times. As for me, I chose to work with gold dust/powder. Your paintings depict the motion of human beings in ample ways. What did you want to express with motion of people among birds and animals? Intending to depict that every single human being has extraordinary features and are unique natures on their own, I painted them doing different motions. The reason that the painting has no beginning or ending, and illustrates nude people, is that I wanted to tell the truth with it. A man comes to the world naked and leaves naked. In my exhibition presented in 2012, I exhibited the paintings that I played with many bright colors. This time, I am presenting my modest and one color oriented works. The transmutation of colors in my work maybe express and individual’s change.

One of OTGO's unique characteristics is to paint his depictions directly on the canvas thereby evading the process of sketching. It is absolutely remarkable in which precise and loving detail Otgonbayar Ershuu fills his canvases. Lively, colorful depictions of paradise, erotica and flocks of horses mesmerize his pictorial surfaces into imaginative compositions, capture and challenge to explore the world of miniature paintings. Otgonbayar Ershuu has created detailed paintings in breathtaking filigree in tempera on canvas. His newest works present a whole new world of creation. The young artist composed a fascinating coexistence of detailed miniature painting and active abstraction of picture elements in acrylic on canvas. He grew up among seven siblings was fascinated by painting ever since his childhood. His talent was discovered and by the age of 15 years he had his own solo exhibitions. From 1996 to 1998 Otgonbayar studied "traditional Mongolian painting" in Ulaanbaatar and received his degree as a painter. Feeling a deep connection with his home country, he decided to learn the craft of Mongolian miniature painting. There was, however, no course of study in this subject, and he acquired the skill within a six-year period of auto-didactic study. During the years 1998 and 2004, Otgonbayar traveled to Mongolia's historic sites and took part in numerous cultural and social projects. During his academic studies he created around 400 pictures. After his studies he participated in several expeditions to historical sites in Mongolia as a painter and conservator. Otgonbayar studied the different techniques and iconography of the miniature paintings as well as their spiritual backgrounds at the Buddhist-lamaist monasteries. He has been active as a free lance artist since 1998. In addition to his free artistic works he has created around 600 "research images." Ershuu has been living in Berlin since 2005. From 2007 to 2010 he studied at the Institute for Art in Context, Faculty of Fine Arts, Berlin University of the Arts and graduated with a Masters of Arts in 2010. Otgonbayar Ershuu has been exhibiting his work in international exhibitions in Japan, Sweden, France, the Netherlands, India, Czech Republic, Switzerland, Poland, Romania, Germany, Moldova and Mongolia.
SHARE
Share on Facebook
Tweet on Twitter
Previous article White-naped cranes from the land of the rising sun
Next article Parliament approves law in a few days and undermines freedom of speech!