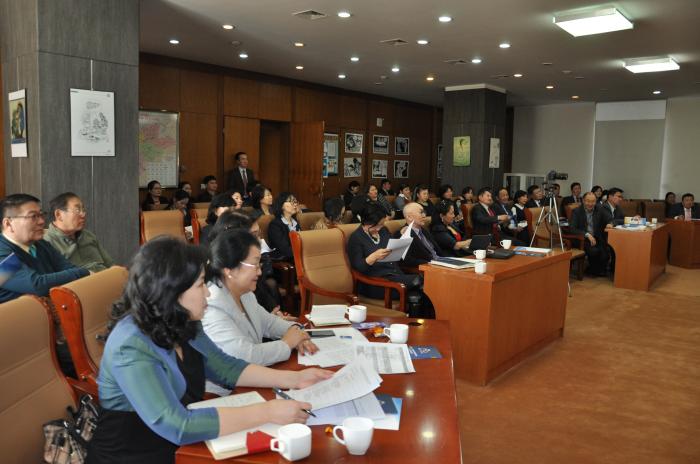 On March 25, the Asia-Europe Meeting (ASEM) preparation team met with administrators from local universities and discussed cooperation and the inclusion of university students as ASEM event volunteers. “ASEM is a significant international organization with 53 partners, 30 European and 21 Asian countries, and international organizations. It includes 60 percent of the world’s population and 58 percent of the world economy. For all I know, there hasn’t been an event which has gathered this many countries in Mongolia since the 1600s. Our government and state officials are brought to this responsibility after hundreds of years. This year is also special as it marks the 20th anniversary of ASEM. “First, it’s an honor to organize ASEM. Second, it calls for great responsibility. Over 10 big events will be organized from April until July 16 for ASEM, and more than 4,000 representatives and 800 to 1,000 journalists will participate in those events. Apart from the participation of experts from every field, we need the assistance of university students,” said Chief of Staff of the President of Mongolia P.Tsagaan. He asked the university administrators for 1,200 to 1,500 university students. The volunteer students will assist in welcoming guests, spreading documents and materials, translating, helping journalists, managing traffic, and in transporting items  when necessary. P.Tsagaan emphasized that it’s essential for the volunteers to be responsible, disciplined, and hard-working. Advisor to the President of Mongolia A.Ganbaatar noted, “The media is helping us promote ASEM and giving the public a positive impression of the meeting. After media personnel decided to cooperate, we hosted a fund raising party on March 16 for our supporting organizations. Media outlets have decided to donate air time and newspaper pages valued at up to 1.5 billion MNT.” He asked university administrators to cooperate and register students to volunteer. University administrators said that they will cooperate and help with human resources. Mongolia was chosen to host ASEM11 in October 2014, during the ASEM10 meeting in Milan, Italy. The ASEM Summit will take place on July 15 and 16. The first ASEM meeting of 2016, the 9th Asia-Europe Parliamentary Partnership Meeting, will be held on April 21 and 22.
SHARE
Share on Facebook
Tweet on Twitter
Previous article Park to be built on area of 250 hectares in Bayanzurkh District
Next article Expansion of further cooperation discussed with the Asia Foundation