Researchers say equal representation is vital for a functioning and effective democracy. In general, representatives of Mongolian women, youth and herdsmen have not been given enough opportunities to speak at the decision-making level. To find a solution to this problem and listen to the opinions of women politicians, the Women’s Leadership Network organized the Women’s Political Leadership Forum on October 27 under the theme “Intensify the Movement”. More than 60 percent of the 120 participants of the forum were locals. They shared their cooperation initiatives, experiences and obstacles, as well as expressed their views on what and how they should focus on intensifying their movement in the future.

Several discussions were held within the framework of the forum. In particular, during the discussion on strategy for intensifying the movement and directions of cooperation, representatives of political parties in Parliament, the National Committee on Gender Equality and civil society organizations presented their activities aimed to increase the political participation of women and discussed solutions and opportunities for cooperation.

All stakeholders concluded that divisions and partisanship within parties, lack of diversity in women’s participation and misconceptions about politics and political parties are barriers to increasing women’s political participation. They pointed out that the women’s leadership network has become a cross-party space and a great opportunity for women to work together regardless of party affiliation. Women politicians and leaders can learn from and support each other while sharing good experiences, the participants mentioned.

During the discussion on lessons of the movement for women’s political rights in Mongolia, political and civil society leaders reviewed projects and measures taken to balance political power and increase women’s participation at the decision-making level and how women need to support each other in the future.

‘STEREOTYPES THAT TIE WOMEN TO HOUSEWORK ARE STRONG IN RURAL AREAS’

During the discussions and forum, the following local representatives expressed their experiences and shared their opinions regarding women’s participation in politics.

Member of Chingeltei District Council and Director of the district’s House of Children’s Books B.Bolortungalag:

I was nominated by the Mongolian People’s Party (MPP) in the 2020 local election. Now I try hard to balance my work and personal life. Sometimes, I neglect my family issues. In general, it is true that a woman can participate in politics only if she has a good husband. Behind a successful woman or man is a supportive spouse.

Men have done most of the construction work but education and human development have been left out. I would like to see more women elected to political decision-making institutions because they are more sensitive to these issues.

The best thing about working as a member of the local council is the trust and respect I receive from local people. I try to be a leader and a good role model.

I have been working in the civil service for 19 years. After graduating from university in 2002, I started working and living in Ulziit soum because I believed that my voice and ideas are needed there. Now, I intend to challenge myself in politics. But rather than choosing a political career, I think that I should give my voice to society and lead the people. Stereotypes that tie women to housework and raising children are strong in rural areas. But nowadays, society is evolving as a whole. When I had just accepted the post of the head of the governor’s office, my close friend said, “You don’t deserve this job. Just do your previous work.” When I asked him why, he replied, “You will be responsible for organizing the military draft. But you don’t know anything about the military.” It’s been over a year since I took the job. I get called at night and sometimes, I don’t go home for many days. In addition to adapting to it, we need to prepare our family affairs in advance. My parents are very helpful when it comes to raising my two children. In general, the influence and support of the family are necessary for a woman to work in public service or hold a management-level position.

I have been involved in politics since 1998. I have been elected as a representative of the provincial council for the second time. After talking with my husband, I decided to participate in politics because I trusted him. My husband accepts and supports my choices.

I think that if the soum begins to develop as a town, young people will come to work from big cities and as a result, the city will decentralize. However, the soum budget may not be enough to start large construction projects.

It has been exactly two years since I worked as the governor of Luus soum. The implementation of our action plan has reached 75 percent. When I was nominated for the position, I made a promise to start a new soum project. This work has already started and is now 95 percent complete. In addition to agriculture, I am also planning some road construction measures to expand the economy of our soum and improve the finances of the people.

The political participation of women in Mongolia can be seen at the level of the highest legislative body. Today, 13 of 76 members of Parliament are women. This is much lower than the global and Asian average. The high participation of women at the executive level shows that they are already prepared to work at the management and decision-making level and that they perform executive-level tasks well.

There is a need to develop policies that promote women’s participation at decision-making levels. Some political parties have quotas for women in their internal rules. It is necessary to strive to increase the quota of 25 percent of MPP and 20 percent of the Democratic Party (DP) to 50 percent in accordance with global trends.

Another factor that prevents women from working at the decision-making level is the exorbitant expenses of political elections. We believe that the expenses of political parties will be relatively reduced in the 2024 elections. Political parties also need to make bold appointments. For example, MPP initiated a bold change in women’s participation in decision-making and for the first time in its 30-year history, appointed a woman as the governor of a province.

According to a World Bank study, a country can boost its economic growth by 10 percent if it raises the participation of women in decision-making levels by 2 percent.

Recently, a drawing competition was announced among elementary school children on the topic “Who is the president of Mongolia?” and 99 percent of them drew men. So, the gender stereotypes that men are leaders and women are executors must be changed.

Member of the National Policy Committee of DP D.Bolorsuren:

Women mainly cook and go grocery shopping for the family. On the other hand, men who take a dominant position at the decision-making level talk about global issues but neglect family-level issues. I believe that if we stand against such stereotypes, society will become healthier. Political parties need to free women from the minimal cash requirement for running for office during elections and help them financially.

I joined politics in 2016 after working as a civil servant. The lack of women’s voices even in the infrastructure sector made me take bolder choices. People are afraid to participate in politics. This is probably due to the fact that the attitude that “politicians are bad” has weakened “political immunity”. But we can’t just ignore it because its immune system is down. In order to clean it up and create a political culture, there is no other way than to enter politics.

The biggest barrier to women entering politics is money. But if we start competing with policies, this barrier will collapse. I believe that if women support each other regardless of party affiliation, nationality or age, it is possible to put this society on the right path.

Member of the Board of Directors of the HUN Party B.Munkhsoyol:

If we raise the number of women at the decision-making level, we can reduce corruption and bribery and boost the effectiveness of budget spending. Women can lead to correct solutions to any social problem and policy.

About 51 percent of Mongolia’s population are women. Therefore, it is necessary for the representatives of the majority of the population to work at the decision-making level.

It is very difficult for everyone to resolve their financial problems to enter politics. That is why we need to reduce the expenses of elections. In general, it is necessary to change the legal framework for new people entering politics.

On the other hand, the nomination process of political parties should be fair and transparent and follow the principle of merit. If we nominate people who are self-centered because of their high education, there will be no end to the cur- rent “sad” stories.

The HUN Party is going to announce its leadership focused on “encouraging women to participate in political decision-making” at its conference on November 4. Our party will support a higher quota level for women. In this context, we will also carry out works to improve and strengthen the capabilities of women. 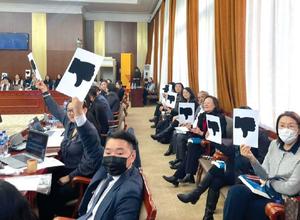