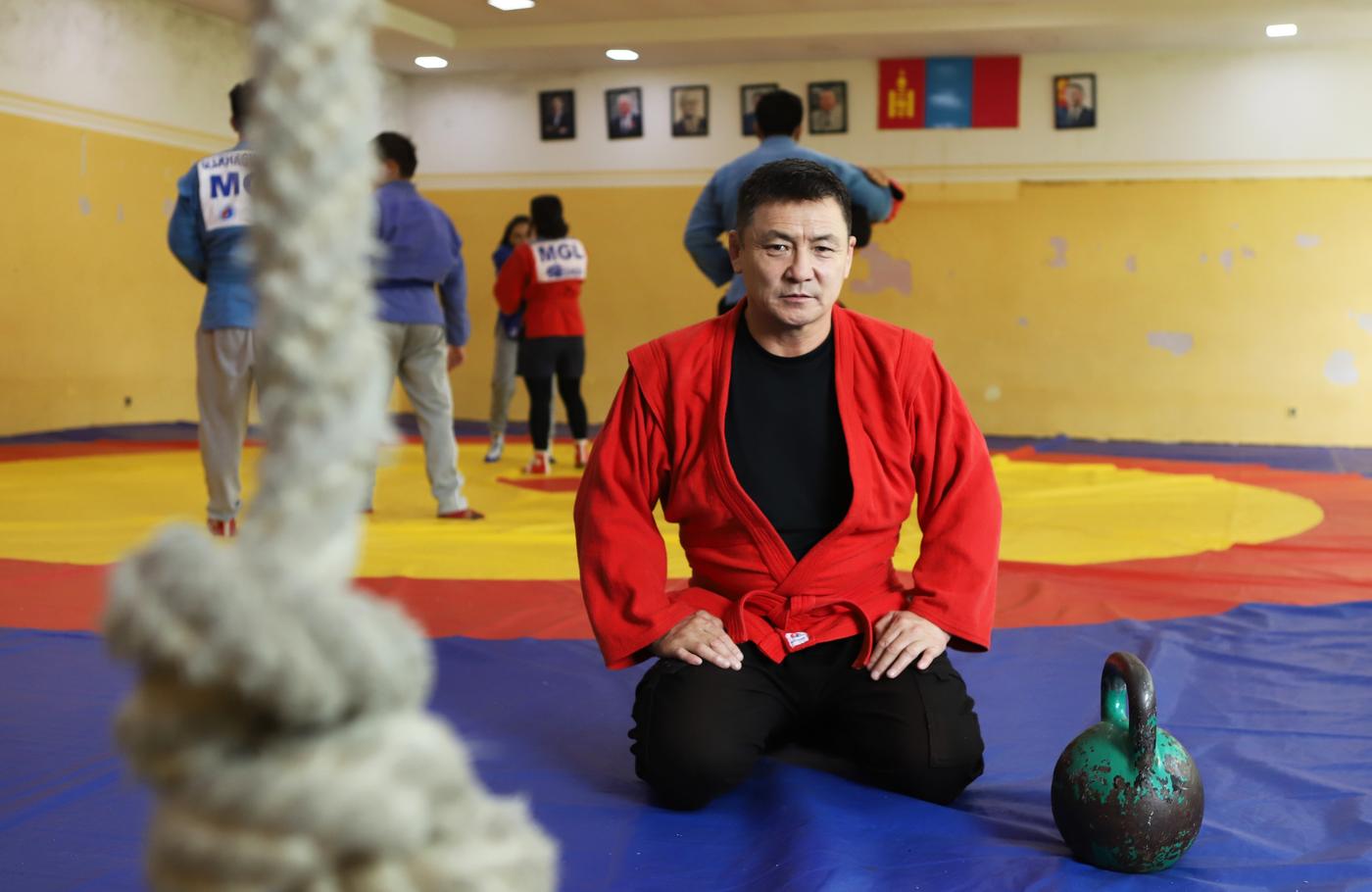 State Honored Athlete G.Uurtsolmon is currently coaching the national sambo team. The four-time world champion in sambo has a secret that trains his athlete in a unique way, which leads them to success. This is kettlebell training. He used kettlebells for his training and felt the results, so he began to train his students in addition to sambo wrestling.

Athletes under his guidance won one gold, two silver and one bronze medals at the Jakarta-Palembang World Championship 2018. The team took first place in the first Mazaalai Mixed Sambo World Cup under the auspices of the President of Mongolia, and took second place at the World Cup, which was held in Cheongju, South Korea.

G.Uurtsolmon competed in the senior category and won a silver medal at the World Cup of the World Kettlebell Sport Federation in May.

Senior athletes say that your wrestling style makes a lot of noise. Your career in sports is very interesting.

I never imagined that I would become an athlete. My father encouraged me to choose sambo, saying, “My son will become a good wrestler. Become an athlete who does everything to beat his opponent. ”

In 1984, after graduating from 10th grade, I went to Russia to study to become an electrician. One day, after class, some Russians were training in sambo wrestling in the hall next to the building. I didn't know the language, but I was driven by my curiosity and entered the gym. At that time, I knew just a few words such as “dad”, “mum”, and “bread”.

They were saying something and using their hands, but I didn't understand. Soon, they handed me sambo clothes. Apparently, they allowed anyone to train. After a lot of training with the Russians, I later became friends and improved my language skills. They are open to anyone. Just say, "Come on," and start talking.

After you returned from Russia, for how long did you practice sambo? I guess you showed what you learned from them to Mongolian athletes.

After six months of training in our northern neighbor, I came to Mongolia and worked for a while at the Baganuur mine. Then I served in the Erdenet military unit. After serving in the army, I was trained by Ch.Uvgunkhuu, a coach of Aldar Sports Association, and continued to train in sambo wrestling. My teacher was a real Mongolian man. When I was studying in Russia, my father passed away. I looked upon my teacher as my father when I lacked care and love.

The teacher treated the children equally, without discrimination. I worked hard to achieve my goal. I have learned the skills taught by my teacher and became famous when I connected with the national sambo wrestling team. I think it's because of my old teacher, not because I'm good.

Mongolians have many sambo champions. When you joined the national team, you may have been greeted by many who had already become world champions.

Of course, there were more than 20 world champions on the national team. Athletes are coached by Ch.Nasantogtokh, G.Purev-Ochir, and Sh.Chanrav. I have many strong competitors. I used to spar with sambo wrestlers Kh.Battulga (now president of Mongolia), N.Baatarbold and J.Ganbold, and others who are world champions.

It's a great achievement for me to compete with them and win the World Championships. It was a rare opportunity to beat them and fight on the world stage. It's harder to compete with top Mongolian athletes than competing in the World Cup. In the gym, athletes learn to respect each other and be proud of their achievements. You feel the pain, the happiness, the joys, the sorrows, the energy, and the strength of the sport in ring and the gym. I became a world champion in sambo by reprimanding, praising and following the advice of my teachers.

Yes, it was a successful year for me. That year, the Sambo World Cup was held in Mongolia. At the time, I was an athlete who belonged to the Aldar Sports Association. The coaches held a team meeting and matched up the names of the competitors. I was the athlete who lost the fewest points in domestic competitions. L.Enebish, who was Ulaanbaatar Mayor at the time, was also the president of the Sambo Wrestling Association, looked at the list and chose me for the competition.

When I scored four points within four seconds, the audience screamed and got up from their seats. At the shouts of the fans, it felt like the Sports Palace was collapsing. My friend was so happy to see me become a champion that he threw his TV away. We talked about it later and laughed a lot.

After the competition, President L.Enebish congratulated me on winning and said, “Well, son, the World Cup will be held in the United States in November. You will compete in the youth and adult categories. Good luck to you. In 1979, D.Tegshee and Ts.Damdin became the youth world champions and the next day, they won the adult championship. It is up to you to repeat the success of your brothers after 10 years. If you become a world champion, you will be rewarded with a three-room apartment. I know your life. I grew up an orphan like you. Athletes who achieved success have a right to participate in the World Cup. From now on, you are my wrestler.”

I couldn’t believe that the big boss considered me in such high regard. At that time, my efforts led me to fame and success.

I have heard more than once that you were regarded as the pride of Mongolia when you won the 1989 World Youth and Adult Championships in the United States.

In the fall of 1989, I traveled to the United States to compete in the World Junior and Adult Sambo Championships. On the first day of wrestling, I became the world champion in the youth category. The next day, exactly before the competition, a man came up behind and slapped me on the back. He was L.Enebish, and he said, “Hey, how is my son? Calm down, there's only one step left. I promised you. Go to Mongolia and get the keys to your apartment.”

You have been coaching the national sambo team since 2018. You train your athletes with kettlebell. I am interested in your coaching skills that helped your students succeed in a unique way.

What is forgotten is sometimes new. In addition to being a sambo wrestling coach, I am the head of the Mongolian Kettlebell Association. I started to train with kettlebelsl in 2010 and have studied how it can affect athletes' training. Kettlebell is an ancient sport, developed in the Russian Empire in the late 17th century. To protect their families from thieves, farmers used to lift weights and exercise. Our national team has been successful in many competitions since then and is now competing on an equal level with the Russians.

For instance, our athlete won one gold, two silver and one bronze medal at the Jakarta-Palembang 2018. The team took first place in the first Mazaalai Mixed Sambo World Cup under the auspices of the President of Mongolia and won second place at the World Cup, which was held in Cheongju, South Korea. The success story of the Mongolian national sambo team, which previously took second place in 1989, was repeated 20 years later. The Mongolian Sambo Wrestling Federation awarded me an apartment and my successful participation in the 2018 Jakarta Asian Games.

You have studied kettlebell training for many years. This training method seems ancient but has been gaining attention in Mongolia lately.

I still have close friendships in Russia. When I was a young athlete, I used to look at my skinny, unresponsive opponent who came out to fight, and I thought, "What's the point of beating this guy? I'll cut him off now."

But, actually, he was strong enough to fight. I was studying the secrets of his power even though he looked so much younger than me. Then I found out that he trained with kettlebell. At the time, I had never studied the method. Later, I tried it myself and felt the benefits. Kettlebell is now becoming a universal sport. I felt the results myself, so I decided to teach many people. The role of the coach is not only to educate athletes through sports, but also to develop the community through physical activity and to live a healthy and long life. Mongolians suffer from many diseases due to lack of exercise. From what I've seen, people put education first and health and longevity second. Today, it is rare to find a person who does not use medication.

People overcome the obstacles of life with mental strength, physical endurance, and tenacity. However, today's youth are less productive and less able to cope with work and life. Weight training not only develops the body but also the mind. Many people in Mongolia train this way. In particular, the military, police and law enforcement officers are training. Mongolian kettlebell coach T.Sambuu once said, "There are no secrets in sports, there are only secrets in work."

Your family also trains with kettlebell. I heard that you influenced your son to choose this sport.

Athletes develop not only themselves but also their family through sports. My wife is a gymnast. My son competed in the senior category of the kettlebells competition in Mongolia and won many times. My son is 18 years old and has returned from military service recently. He won the Kettlebell Championship of the Army. I taught my son this sport from an early age. Some women aged between 40 and 50 train with kettlebells with my wife. They suffer from chronic pain and muscular problems. Those women are training and this helps then return to a better health. You can live a long life by keeping your internal organs healthy. This is an example of how chronic diseases can be cured by exercising and not being poisoned by drugs.

The musculature of a person who trains with kettlebell, suppresses and destroys cancer cells in the body.

In Ulan-Ude, Russia, many elderly people train this way. There is a story of a person who was diagnosed with brain cancer and was cured with the help of kettlebell training. In this way, the sport continues to benefit in many ways.