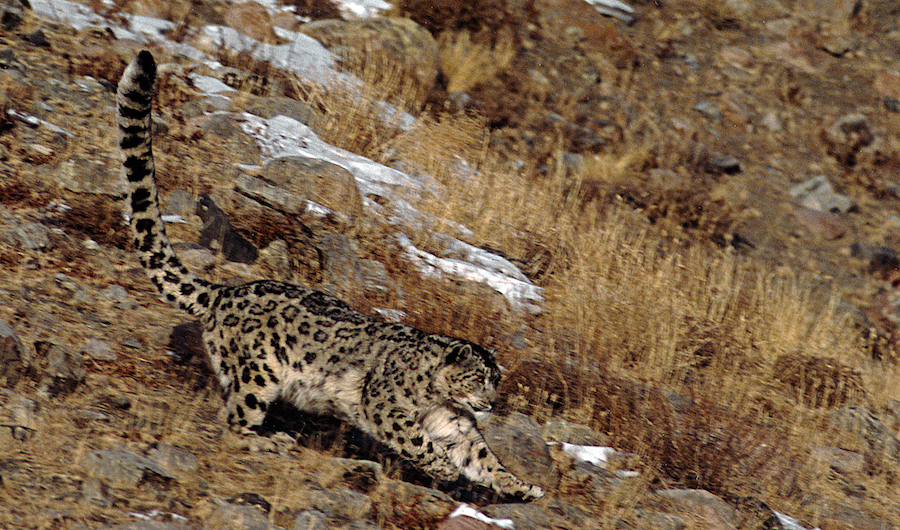 By Rebecca Cook On April 14, Parliament approved the proposal to form the Tost Tosunbumba National Park in Umnugovi Province. The decision is a significant achievement for the continued struggle to protect the endangered snow leopard species that resides there, as well as for the global conservation effort. The new National Park status means that the area will be immune to hunting, mining and other developments; only traditional procedures that pose no threat to the habitat will be permitted. This safeguarded region is unique as researchers discovered it is one of the most populated territories of the magnificent and rare snow leopard. Mongolia is renowned for its topography of vast vistas, ranging from barren desert to verdant grassland. The Tost Tosunbumba National Park is no exception, boasting extensive biodiversity as well as a rich cultural heritage. It is located in Umnugovi Province; the largest and most scarcely populated province in Mongolia. The area has long been of interest for conservationists, who have been working with the local herder families for years to ensure the preservation of the snow leopard and its prey through residential schemes organized by The Snow Leopard Conservation Fund (SLCF) and the Snow Leopard Trust (SLT). These schemes aimed to furnish local herder families with a constant source of salary, provided they guaranteed they would not hunt the snow leopard or its prey. The snow leopard is an elegantly striking creature and one that Mongolian law strives to maintain a high level of protection for against the persistent dangers of poaching and habitat destruction. It has been estimated that, of the 12 countries the snow leopard inhabits, Mongolia possesses the second highest population of the species. Due to the high population density of snow leopards in the Tost Tosunbumba area, it was chosen as the site for the most exhaustive study of snow leopards to date. The investigation was undertaken in 2008 as a joint venture between the SLCF, SLT and the Mongolian Academy of Sciences; a research station was built on location. The study aimed to observe the snow leopard over an ample period of time and determine its habits, prey and habitat through the use of GPS collars on an elect group of snow leopards. Initial results showed the Tost mountain range to be one of the species’ most substantially occupied areas, with a reliable reproducing populace of snow leopards. Despite the relative prevalence of the snow leopard in this region, there was a noticeable lack of lawful safeguards to ensure their survival. Mongolia is fortunate to have an abundant supply of minerals, the excavation of which accounts for a considerable portion of the national income. Although national development through the mining of these minerals can provide a plethora of benefits in the form of improved infrastructure, social services, education and employment, the effects on the environment can be crippling and, in severe cases, ruinous. Mines are large scale operations that require explosives, roadworks and railroads for supply transportation as well as the influx of swaths of people to work in the mines. The extensive disturbances can prove devastating to both local herder families, as their fields are lost, and to the local ecosystems. Mining licenses were granted in Tost Tosunbumba years previously, serving as a catalyst for conservationists to endeavor to gain legal protection for the wildlife, so the snow leopard habitat could be maintained and the research into the species could continue. “Within the 8,163 square kilometers that are being considered for the National Park, there are currently around twelve licenses for mining exploration, and two active mining sites,” explained Bayarjargal Agvantseeren, the leader of Mongolia’s SLCF and director of SLT’s Mongolia Program, on the SLT website. These pressing hazards endangered more than the snow leopard; the threat extended to the general environment, which has provided the local inhabitant’s livelihood for generations. The campaign to gain protection for this vital snow leopard habitat has been a process of several years, and is owing to the commendable dedication of the SLCF, SLT, local government, provincial government of Umnugovi and the local community. In 2010, a vital milestone was reached when the provincial and central government granted Tost and Tosunbumba the status of Local Protected Area. However, those involved understood that greater recognition was required for the rich wildlife and they therefore began working with locals and the government, conveying why snow leopard protection is valuable and feasible, to attain the State Protected Area status that Parliament permitted earlier this month. The mountain range has now been accepted as a Nature Reserve, ensuring the snow leopards and their ecosystem the highest degree of protection. The Tost Tosunbumba National Park solidifies Mongolia’s strong tradition of conservation, harking back to its creation of the world’s first National Park, Bogd Khan Mountain, in 1778. The government is currently deliberating on the precise borders of this National Park and whether the mining licenses will lie outside its confines or will be nullified and compensated for. It is commendable that Parliament had the prudence and tenacity to set this precedent for conservation in Mongolia as well as abroad, in spite of increasing pressure to succumb to the needs of the economy and development, which often compromise biodiversity and environments such as that of Tost Tosunbumba. Mongolia has successfully demonstrated to the global community the precautions necessary to ensuring the survival of endangered species and their fragile habitats.
SHARE
Share on Facebook
Tweet on Twitter
Previous article Public transportation: Reversing when world is advancing forward
Next article O.Tugs-Erdene: My biggest dream is to win medal at 2028 Summer Olympics