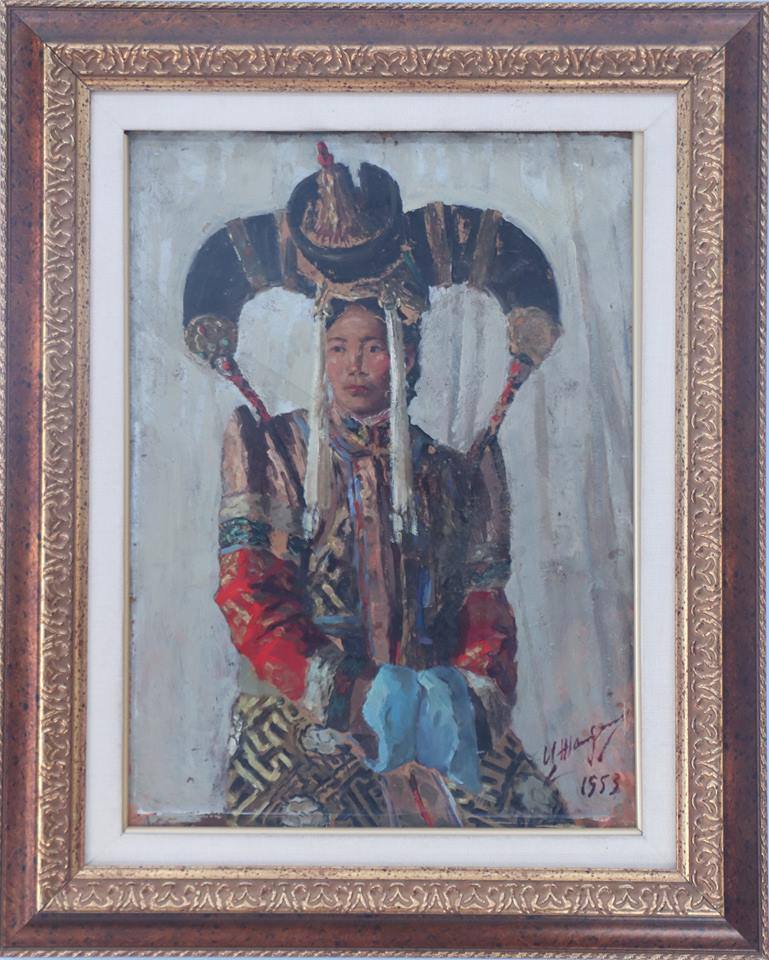 By B.DASHDULAM For art historians and art lovers alike, the last few years have been extremely eventful in regards to magnificent lost art being uncovered, causing a worldwide sensation. From a potentially 15 million USD Jackson Pollock painting to Leonardo da Vinci’s masterpiece “Salvador Mundi”, which was believed to have been painted around the same time he painted the “Mona Lisa” in the 16th century, proven to have once belonged to King Charles I, and is expected to reach an estimated price of 100 million USD in an upcoming Christies Auction. In the wake of these discoveries, there has naturally been a significant rise in the appreciation of art and a fervor to warrant a second look at art pieces in the lucky chance that they might be of value. One such lucky instance, occurred at the Bogd Khaan Palace Museum a few weeks ago, where a painting was discovered to have been of much more significant value than initially presumed. The painting in question was first uncovered by art historian and museum registrar Ts.Guchin-Ish, who uncovered it from the museum storage space after initially presuming it might have been a depiction of the late Mongolian Queen Genenpil and was displayed and placed in a picturesque position within the museum office after being carefully dusted and cleaned by the museum’s head of foreign affairs. Through a lucky and chance encounter, when only the aforementioned museum staff was present in the office, renowned Mongolian artist Ganbat Jamsran walked into the room where the painting was, and immediately recognized the piece and asked in disbelief, “Where did you get that painting?” After being assured of the unknown provenance, he stated, “That painting was created by my father!” The painting, called “Khalkha Wife”, was revealed to have been painted over half-a-century ago in 1957 by one of the most premier names in Mongolian art, Jamsran Tserendorj, and was up until then presumed lost for decades. The only known remnant and proof of this painting was an old black and white photograph taken by the artist in 1957. Ganbat Jamsran clarified that “Khalkha Wife” was created as part of an ethnographical series that depicted different traditional Mongolian clothing and includes paintings such as “Kazakh Woman” and “Uriankhai Lady”. He further went on to explain that the piece was one of his father’s earliest works, created only a few years after he made his first forays as an artist. The skill and mastery evident in this painting, which exhibits the careful juxtaposition of warm color hues and a clear attention to detail, was explained by Ganbat Jamsran as only the beginnings of his father’s eventual mastery of his craft, which is a testament to the skills and respect Jamsran Tserendorj would accumulate later in life. Jamsran Tserendorj (1923-1985) was one of the most premier artists of his time in Mongolia with near unparalleled skill and talent. Without a proper education, being self-taught and with no formal artistic training, he was a true example of pursuing an artistic career with only “god given talent”. Jamsran was talented in a variety of artistic fields and mediums such as oil painting, Mongol zurag, poster art, appliques, carpentry, designing intricate carpet patterns, and poetry. His keen modern sense and perceptiveness, which was mastered years ahead of its time, can be seen in the posters he created, which resembles the type of digital art currently made only using the employ of advanced computer programs. Some of his best masterpieces include those such as “Spring in Orkhon” (1962) and “Mongolian Woman” (1968) are displayed in the National Gallery of Mongolia as revered and select examples of Mongolian Art. Other pieces are currently displayed or part of many museums in Ulaanbaatar, provinces and abroad, in places such as the National Art Gallery, the National Museum of Mongolia, the Military Museum of Mongolia, Elbegdorj Gallery, the Selenge Museum, the Darkhan Museum, the Museum of Kyaktha and much more in personal collections. Considering the term polymath isn’t used lightly, and is used to refer to those such as Leonardo da Vinci and Undur Gegeen Zanabazar, and the fact that it could potentially be applied to reference Jamsran Tserendorj, this discovery of one of Jamsran Tserendorj’s early works through happy coincidence is an extremely important find for the development of continuous research into Mongolian Art History. It is also crucial for the preservation of Mongolian culture and art, especially taking into account that a significant amount of Jamsran Tserendorj’s pieces have been unfortunately lost, burnt or stolen. How the painting came to arrive at the Bogd Khaan Palace Museum in the past is still unknown, nor the methods of its procurement. But the future of the “Khalkha Wife” painting is seemingly extremely bright. Currently, Ganbat Jamsran is working to obtain a copyright for the painting and the painting has inspired several new research and publications, including a compilation catalogue of Jamsran Tserendorj’s works, where the painting will be featured and made available for public viewing for the first time in decades.
SHARE
Share on Facebook
Tweet on Twitter
Previous article Hydropower plant project is crucial for energy independence
Next article ‘Parliament will demand responsibility from ministers’

‘Parliament will demand responsibility from ministers’