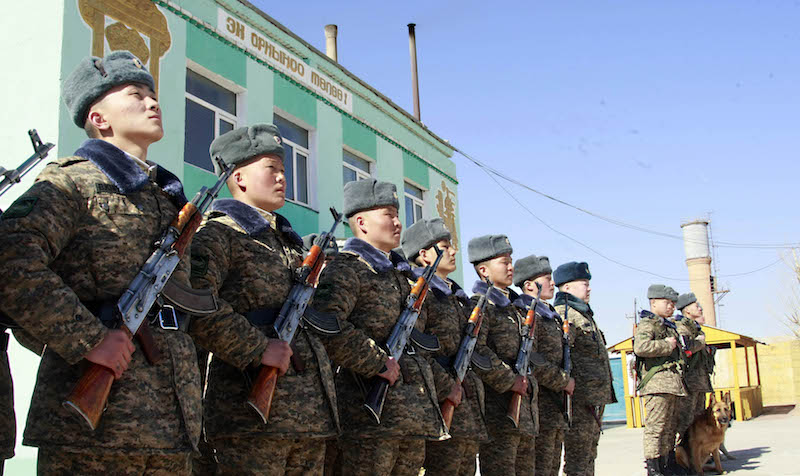 Today is Mongolian Soldiers’ Day and the 95th anniversary of the Mongolian
Armed Forces. It is the perfect day to congratulate patriots, soldiers, and mili-
tary ofcers who have fought for Mongolia’s independence and are working hard to defend
the nation.
Mongolians usually celebrate March 8 as a combination of Soldiers and Men’s Day. The government organized several activities as part of Mongolian Soldiers’ Day and the 95th anniversary. Two days ago, a Three Generation’s Meeting of Veterans and Youth and an open house day to introduce military and defense legislations and activities and promote the Mongol Tsergiin Javkhaa (Mongolian Soldiers’ Might) Competition was held at the Central Cultural Palace.
The meeting and open house day was attended by Deputy Mayor of Ulaanbaatar in Charge of Social Development Issues Ts.Enkhtsengel, Minister of Defense Ts.Tsolmon, Commander of the General Purpose Troops of the Mongolian Armed Forces Brigadier-General R.Sukhbat, Colonel B.Amgalan, Head of Border Protection Unit No.0252 Colonel J.Damdinbazar, Head of the Military Unit of the Ulaanbaatar City Governor's Ofce J.Boldbaatar, and other military officers.
Deputy Mayor Ts.Enkhtsengel gave an opening speech, congratulating past veterans and military soldiers. He underlined that the Mongol Tsergiin Javkhaa Competition was being held for the fourth time to ensure the healthy and safe living conditions of military personnel. Reportedly, the competition strengthens relations between the public and military personnel, improves soldiers’ status, and sparks feelings of patriotism.
During the event, a documentary film about Mongol Tsergiin Javkhaa 2015 Competition was
shown and military ID cards were handed to 18-year-old men who volunteered to join the military. Afterwards, the Mongolian Military Song and Dance Academic Ensemble gave a performance and the prize winners of a “Defense Operations that I Know” essay
contest received their awards.
Military marching bands held a performance yesterday at Chinggis Square to mark Soldiers’ Day. Various military bands marched to Chinggis Square from the East and West Intersections, Baga Toiruu Street, Bayanburd Street, and Ikh Khuraldai to gather for performances and honors.
SHARE
Share on Facebook
Tweet on Twitter
Previous article White-naped cranes from the land of the rising sun
Next article Parliament approves law in a few days and undermines freedom of speech!