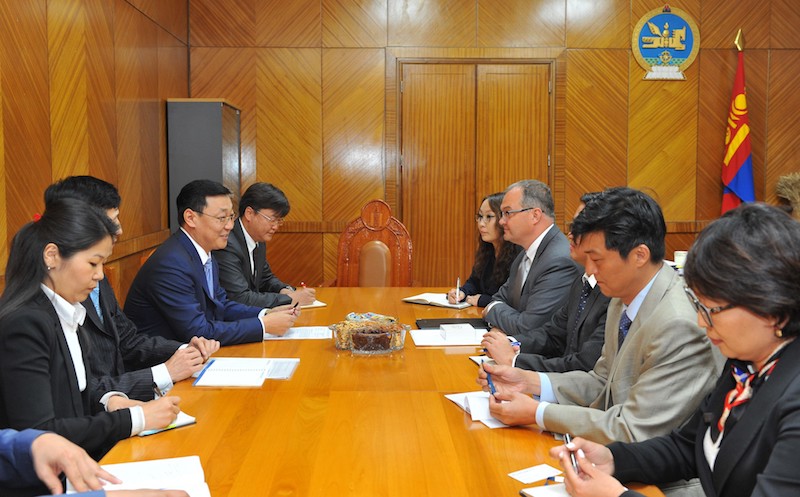 A delegation led by the World Bank’s Country Manager to Mongolia James Anderson and Country Director of the International Finance Corporation (IFC) to Mongolia Tuyen Nguyen met with Prime Minister J.Erdenebat to discuss issues concerning Mongolia’s economy and plans to overcome current economic difficulties. James Anderson said that Mongolia and the World Bank will mark their 25th anniversary of cooperation this year. He underlined that in connection with the event, the World Bank and Mongolia will review its cooperation, and promised to consider cabinet proposals for a strategic cooperation plan for the next 25 years. In response, Prime Minister J.Erdenebat said, “Mongolia’s economy needs to have many pillars. With this aim, we will focus on developing processing industries in all sectors in order to diversify the nation’s economy. We will lower high dependence on the mining sector. “However, as of today we don’t have any economically profitable projects with positive environmental and social evaluations, and completed feasibility studies. We want to collaborate with the World Bank in evaluating major industrial projects and work on feasibility studies.” Anderson noted that he agrees with the Prime Minister, and suggested that the Mongolian government focus on regaining foreign investors’trust. The IFC’s Country Director Nguyen said that the IFC is ready to provide assistance for overcoming Mongolia’s economic crisis by supporting Mongolia’s private sector. The World Bank and IFC delegation also met with Minister of Foreign Affairs Ts.Munkh-Orgil. At the meeting, Minister Ts.Munkh-Orgil presented about the structure and functions of the new cabinet. He talked about governmental measures to be taken to stabilize the macro-economy and for attracting investments. “A new department on external trade and economic cooperation has been set up within the Ministry of Foreign Affairs, and Mongolia is now able to collaborate with the World Bank in diversifying Mongolian exports, facilitating trade issues concerning the joining international trade agreements and treaties,” the minister said. The World Bank delegation reported about ongoing projects being implemented by the bank in Mongolia, and reached an agreement to study possibilities to cooperate in training experts to establish regional economic integration and international commerce agreements.
SHARE
Share on Facebook
Tweet on Twitter
Previous article Smartphone addiction harms children’s mental health
Next article The EU-funded ‘Sustainable Plastic Recycling in Mongolia’ project is helping to improve waste management in Mongolia