Mongolian Economic Forum focuses on solutions for diversifying the economy 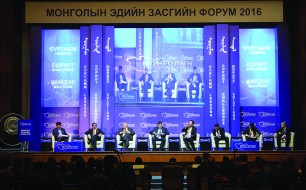 The seventh annual Mongolian Economic Forum held from March 30 to 31, under the slogan, “Lessons, Challenges, and Solutions”, underlined solutions for diversifying the nation’s economy and determining its future trends. During the opening ceremony of the forum, Prime Minister Ch.Saikhanbileg emphasized that current economic difficulties in Mongolia were not impacted by any external factors, but by poor state policies. The PM said that since Mongolia adopted democracy, the country has faced several economic challenges, some of which derived from domestic issues and some not. He underlined that when Mongolia’s economy was improving, Mongolians made a choice to expand its consumption, not learning from its prior mistakes and crises. “When the prices for coal were drastically increasing in 2011, Mongolia could have moved forward with Tavan Tolgoi, and started building its railway. And if government didn't take back Tavan Tolgoi from the private sector in 2013, they would have completed the railway and Mongolia’s coal export would have looked differently,” said the PM. Ch.Saikhanbileg stressed, “Current difficulties facing the country can be considered not as the world’s, but Mongolia’s; not business, but political; and not economical, but mental difficulties. In order to overcome difficulties, political parties, the state, and the public need to treat their political and economic mentality, otherwise, the nation’s politics and economics won’t be treated.” Saikhanbileg noted that a country can’t be developed based only on its natural resources, and Mongolia needs advanced technology and qualified personnel. He underlined that Mongolia needs to develop other sectors and diversify the economy. Even though Finance Minister B.Bolor reported last week that the government’s overall debt has reached seven billion USD, during his speech, the PM noted that the government’s debt is 4.9 billion USD and Mongolia’s total debt owed to commercial banks and the private sector has reached 21 billion USD. Director of International Finance Corporation’s East-Asia Department Vivek Pathak underlined that Mongolia needs to equally develop other sectors, and not focus only on the mining sector. “By developing all sectors, including tourism, agriculture, and focusing on meat exports, Mongolia will overcome economic difficulty and become a big player in the global market,” said Pathak. The Chairman of the Office of the President, P.Tsagaan, said that he hopes the issues and solutions discussed during this year’s economic forum will be important in determining the nation’s future economic trends. Attending the second day of the forum, President Ts.Elbegdorj emphasized that if Mongolia had implemented its mega projects earlier, the nation’s economy wouldn't be facing its current difficulties. Ts.Elbegdorj underlined that because the country’s economic situation is difficult, seniors and women take out welfare loans for food and medicine. He added that the numbers of financially viable entities are decreasing day by day, and they are taking out loans to pay employee salaries. “Mongolia’s budget sees approximately one trillion MNT in deficit annually, and an amendment is made to the state budget. Amending the budget means cutting loans for citizens and businesses. If we had implemented mega projects, many new jobs would have been created and entities would have had money. Mongolia is not a lavish country that can afford to lose opportunities. We don’t always get chances. We are losing our opportunities because of politics. That’s why we need to talk about politics not economics. We need regulations on making politicians accountable,” the President said. The second day of the forum was held under the theme of “Business Environment”. On the second day of the forum, Director of Mongol Idea Kh.Khaliunbat underlined that other countries don’t succeed in implementing the mortgage loan program being carried out in Mongolia. He repeatedly noted that apartments have been in excessive supply. “Prices for apartments fall when surplus exceeds demand, in accordance with market principles. The prices for apartments are not decreasing in Mongolia, and apartments worth 8.7 trillion MNT are frozen in the domestic market,” Khaliunbat claimed. Subconferences were held on “Safe Food - Sustainable and Efficient Business”, “Social Insurance Upgrade”, “Partnership for Development”, and “Accurate and Capable Government”. Organizers of the forum underlined that this year’s forum focused on solutions, while forums held in previous years discussed only challenges and issues that needed to be tackled, and were not focused on solutions. They also underlined that over the past three years, the forum organizers followed a policy to not invite foreigners to the forum. They said that Mongolia needs a platform for discussing its domestic issues. The organizers announced that they are going to hold a business summit in June with foreign investors. Speaker of Parliament Z.Enkhbold presented closing remarks at the two-day forum.
SHARE
Share on Facebook
Tweet on Twitter
Previous article Smartphone addiction harms children’s mental health
Next article The EU-funded ‘Sustainable Plastic Recycling in Mongolia’ project is helping to improve waste management in Mongolia